From Wikipedia, the free encyclopedia
Place in Kantō, Japan

Chigasaki is located on the eastern bank of the Sagami River in south-central Kanagawa Prefecture, facing Sagami Bay on the Pacific Ocean to the south. The Hikiji River flows through part of the city.

The area around Chigasaki has been inhabited since prehistoric times. The area was largely pasture and farmland well into the Edo period. The Tōkaidō connecting Edo with Kyoto passed through what is now Chigasaki, but without a post station. A large part of the area was the tenryō territory in Sagami Province controlled directly by the Tokugawa Shogunate through the Edo period, though other parts were administered by small clans including the Ōoka clan, which is renowned for its descendant Ōoka Tadasuke.

On April 1, 2003, the population of Chigasaki exceeded 200,000 and it became a special city with increased local autonomy.

On October 24, 2014, Chigasaki agreed with Honolulu to establish the sister city relationship. [1]

Chigasaki is largely a bedroom community for Tokyo and Yokohama, and has been noted as a seaside resort community since the Meiji period. Tourism and summer leisure activities remain important to the local economy.

Companies headquartered in Chigasaki include:

The shoreline from Chigasaki to Kamakura is called the " Shōnan area". A popular swimming destination, Chigasaki is well known as the birthplace of Japanese surfing. A shop called "Goddess," located only about 20 meters from the shoreline, claims to be the first surfboard shop in Japan. Bicycles with metal fittings for holding surfboards are prominent in the area. A section of the beach in Chigasaki is called "Southern Beach," inspired by the Southern All Stars, a famous J-pop singing group whose lead vocalist Keisuke Kuwata hails from Chigasaki. The symbol of Southern Beach is Eboshi-iwa, a large hat-shaped rock that is visible from the coast. 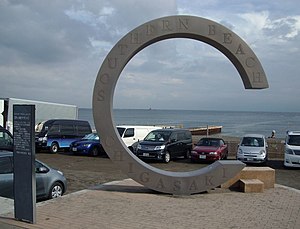 Chigasaki is also famous for being the center of Japanese Hawaiian culture with many tropical and Hawaiian stores located mainly in the southern side of the town. Fridays in Chigasaki was called "Aloha Friday" in which consumers were able to have discounts in many stores and taxis. Salesclerks and city officers are encouraged to work wearing aloha shirts as a part of Cool Biz campaign to promote its Hawaiian culture every summer since 2003. [2]

In contrast to the popularity as a modernized resort in south, north part of the city still retains some historical heritages. Ōoka Echizen festival is held in the family temple of the Ōoka clan ( bodaiji) "Jōkenji" on May.