From Wikipedia, the free encyclopedia
Valley and a residential neighborhood of Honolulu, Hawaiʻi, United States
For other uses, see Manoa (disambiguation). 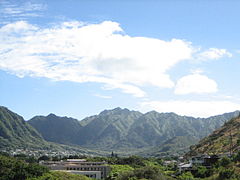 Similar to many Honolulu neighborhoods, Mānoa consists of an entire valley, running from Mānoa Falls at the mauka (inland-most) end to King Street. The valley receives almost daily rain, even during the dry season, and is thus richly vegetated – though the valley walls are often dry. Seeing rainbows in the valley is a common occurrence, and is the source of the University of Hawaiʻi at Mānoa sports team names, the Rainbow Warriors (for men's teams) and Rainbow Wahine (for the women, with the beach volleyball team more often using SandBows).

The central shopping area of Mānoa is the Mānoa Marketplace which features a farmer's market several days of the week. More recent development has seen housing on steeper parts of the Diamond Head side valley wall.

Mānoa means thick, solid, vast, depth or thickness in the Hawaiian language. [1] There is another valley named Mānoa on the north shore of Kauaʻi.

Mānoa stream begins at the base of Mānoa Falls and runs through the valley before joining Palolo stream to form the Manoa-Palolo drainage canal, which flows into the Ala Wai Canal. Floods caused by high rainfall have plagued the residents living along Mānoa stream. Most recent was on October 30, 2004 when Mānoa stream overflowed causing millions of dollars in damages to residential homes and University of Hawaiʻi at Mānoa buildings.

Mānoa is the site of the first sugarcane and coffee plantations in the Hawaiian Islands. Hawaiian coffee was first introduced along Manoa Valley in 1813 by Don Francisco de Paula y Marytin as an ornamental plant. In 1825 Chief Boki, the Royal Governor of Oahu, followed up and brought coffee trees back from Brazil on the ship HMS Blonde. [2]:34 Chief Boki also chose Manoa Valley as the historic birth site of the very first coffee plantation in Hawaii. With the aid of agriculture expert, John Wilkinson, the coffee trees were able to survive which allowed its descendants to be brought over to Kona and other islands many years later. Hawaiʻi is the only state in the United States that produces coffee commercially. For more history see coffee production in Hawaii.

The private Saint Francis School was in Manoa until its 2019 closure. [4]