From Wikipedia, the free encyclopedia
This article is about the lake on the Colorado River. For the city in Arizona, see Lake Havasu City, Arizona. For other uses, see Havasu (disambiguation).

Lake Havasu is a large reservoir formed by Parker Dam on the Colorado River, on the border between San Bernardino County, California and La Paz County, Arizona. Lake Havasu City sits on the Arizona (eastern) side of the lake with its Californian counterpart of Havasu Lake directly across the lake. The reservoir has an available capacity of 619,400 acre-feet (764,000,000 m3). The concrete arch dam was built by the United States Bureau of Reclamation between 1934 and 1938. The lake's primary purpose is to store water for pumping into two aqueducts. Prior to the dam construction, the area was home to the Mojave Indians. The lake was named (in 1939) after the Mojave word for blue. [1] In the early 19th century, it was frequented by beaver trappers.[ citation needed] Spaniards also began to mine the areas along the river.[ citation needed] 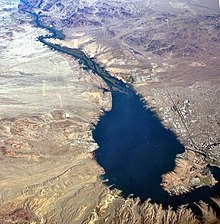 The shorelines are in the ecotone (transition zone) of the higher Mojave Desert to the lower Sonoran Desert and its Californian Colorado Desert ecoregions.[ citation needed]

Lake Havasu is well known for its recreational fishing and boating, which bring in around 750,000 visitors a year. [2] Fishing tournaments are often held on the lake, where bass are the main catch.[ citation needed]

White sturgeon were stocked in Lake Havasu in 1967 and 1968 from stock obtained from San Pablo Bay, California. While some dead sturgeon were found downstream from Havasu (probably killed during passage over dams), living fish have not been recorded, but may still exist along the southern end of Lake Havasu near Parker Dam. [3] Sturgeon have been known to grow upwards of 20 feet (6 meters) and can live in excess of 100 years and many in and around Lake Havasu continue in their efforts to catch a glimpse of the majestic animal.[ citation needed]

The California Office of Environmental Health Hazard Assessment (OEHHA) has developed a safe eating advisory for Lake Havasu based on levels of mercury found in fish caught from this water body. [4]

Robert Paxton McCulloch was an American entrepreneur most notable for purchasing the old London Bridge and moving it to one of the cities he founded in Arizona. Lake Havasu sparked the imagination of McCulloch, who purchased 3,500 acres (1,400 ha) of lakeside property along Pittsburgh Point, the peninsula that eventually would be transformed into "the island".[ citation needed]