The striped bass (Morone saxatilis), also called Atlantic striped bass, striper, linesider, rock or rockfish, is an anadromous perciform fish of the family Moronidae found primarily along the Atlantic coast of North America. It has also been widely introduced into inland recreational fisheries across the United States. Striped bass found in the Gulf of Mexico are a separate strain referred to as Gulf Coast striped bass. [2]

The striped bass is the state fish of Maryland, Rhode Island, and South Carolina, and the state saltwater (marine) fish of New York, New Jersey, Virginia, and New Hampshire.

The history of the striped bass fishery in North America dates back to the Colonial period. Many written accounts by some of the first European settlers describe the immense abundance of striped bass, along with alewives, traveling and spawning up most rivers in the coastal Northeast. [3] 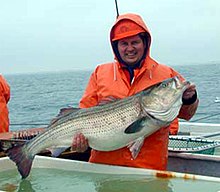 A researcher holding up a large striped bass

Striped bass are native to the Atlantic coastline of North America from the St. Lawrence River into the Gulf of Mexico to approximately Louisiana. They are anadromous fish that migrate between fresh and salt water. Spawning takes place in fresh water.

Introductions outside their natural range

The spawning success of striped bass has been studied in the San Francisco Bay-Delta water system, with a finding that high total dissolved solids (TDS) reduce spawning. At levels as low as 200 mg/l TDS, an observable diminution of spawning productivity occurs. [12] They can be found in lakes, ponds, streams, and wetlands.

Though the population of striped bass was growing and repopulating in the late 1980s and throughout the 1990s, a study executed by the Wildlife and Fisheries Program at West Virginia University found that the rapid growth of the striped bass population was exerting a tremendous pressure on its prey (river herring, shad, and blueback herring). This pressure on their food source was putting their own population at risk due to the population of prey naturally not coming back to the same spawning areas. [13]

In the United States, the striped bass was designated as a protected game fish in 2007, and executive agencies were directed to use existing legal authorities to prohibit the sale of striped bass caught in federal waters in the Atlantic Ocean and Gulf of Mexico. [14]

In Canada, the province of Quebec designated the striped bass population of the Saint Lawrence as extirpated in 1996. Analysis of available data implicated overfishing and dredging in the disappearance. In 2002, a reintroduction program was successful. [15] [16]

A striped bass caught off the New Jersey coast

Striped bass spawn in fresh water, and although they have been successfully adapted to freshwater habitat, they naturally spend their adult lives in saltwater (i.e., they are anadromous). Four important bodies of water with breeding stocks of striped bass are: Chesapeake Bay, Massachusetts Bay/ Cape Cod, Hudson River, and Delaware River. Many of the rivers and tributaries that emptied into the Atlantic, had at one time, bred stock of striped bass. This occurred until the 1860s. [3] One of the largest breeding areas is the Chesapeake Bay, where populations from Chesapeake and Delaware bays have intermingled. [17] The very few successful spawning populations of freshwater striped bass include Lake Texoma, Lake Weiss (Coosa River), the Colorado River and its reservoirs downstream from and including Lake Powell, and the Arkansas River, as well as Lake Marion (South Carolina) that retained a landlocked breeding population when the dam was built; other freshwater fisheries must be restocked with hatchery-produced fish annually. Stocking of striped bass was discontinued at Lake Mead in 1973 once natural reproduction was verified. [18]

Hybrids with other bass

Striped bass have also been hybridized with white bass to produce hybrid striped bass also known as wiper, whiterock bass, sunshine bass, palmetto bass, and Cherokee bass. These hybrids have been stocked in many freshwater areas across the US. [19] [20]

Striped bass are of significant value for sport fishing, and have been introduced to many waterways outside their natural range. A variety of angling methods are used, including trolling and surf casting with topwater lures a good pick for surf casting, as well as bait casting with live and dead bait. Striped bass will take a number of live and fresh baits, including bunker, clams, eels, sandworms, herring, bloodworms, mackerel, and shad, bluegills, worms, crayfish, bucktails jigs, and silver spoons.

The largest striped bass ever taken by angling was an 81.88-lb (37.14-kg) specimen taken from a boat in Long Island Sound, near the Outer Southwest Reef, off the coast of Westbrook, Connecticut. The all-tackle world record fish was taken by Gregory Myerson [21] on the night of August 4, 2011. The fish took a drifted live eel bait, and fought for 20 minutes before being boated by Myerson. A second hook and leader was discovered in the fish's mouth when it was boated, indicating it had been previously hooked by another angler. The fish measured 54 in length and had a girth of 36 in. The International Game Fish Association declared Myerson's catch the new all-tackle world record striped bass on October 19, 2011. [22] In addition to now holding the All-Tackle record, Meyerson's catch also landed him the new IGFA men's 37-kg (80-lb) line class record for striped bass, which previously stood at 70 lb. The previous all-tackle world record fish was a 78.5-lb (35.6-kg) specimen taken in Atlantic City, New Jersey on September 21, 1982 by Albert McReynolds, who fought the fish from the beach for 1:20 after it took his Rebel artificial lure. [23] Recreational bag limits vary by state and province.

Striped bass are an anadromous fish, so their upriver spawning migrations led some individuals to become "landlocked" during lake dam constructions. The first area where this was documented was at the Santee-Cooper River during the construction of the two dams that impounded Lakes Moultrie and Marion, and because of this, the state game fish of South Carolina is the striped bass. [24]

Recently, biologists came to believe that striped bass stayed in rivers for long periods of time, with some not returning to sea unless temperature changes forced migration. Once fishermen and biologists caught on to rising striped bass populations, many state natural resources departments started stocking striped bass in local lakes. Striped bass still continue to exhibit upstream migrations from freshwater lakes during the spawning period. Landlocked stripers have a hard time reproducing naturally, and one of the few and most successful rivers they have been documented reproducing successfully is the Coosa River in Alabama and Georgia. [25]

The striped bass population declined to less than 5 million by 1982, but efforts by fishermen with throw back lengths for smaller striped bass and management programs to rebuild the stock proved successful, and in 2007, there were nearly 56 million fish, including all ages. Recreational anglers and commercial fisherman caught an unprecedented 3.8 million fish in 2006. The management of the species includes size limits, commercial quotas, and biological reference points for the health of the species.

The Atlantic coast-wide harvest of striped bass is managed by the Atlantic States Marine Fisheries Commission (AMSFC). In October of 2019, the AMSFC announced that the 2018 Benchmark Stock Assessment indicated that "the resource is overfished and experiencing overfishing" [28] The announcement has led to some Atlantic states declaring a closure on this year’s trophy Striper recreational fishing season." [29] In addition to regulatory actions, another way to replenish and help repopulate the striped bass population is to reintroduce the species to original spawning grounds in coastal rivers and estuaries in the Northeast. [3]

Striped bass has white meat with a mild flavor and a medium texture. It is extremely versatile in that it can be pan-seared, grilled, steamed, poached, roasted, broiled, sautéed, and deep fried (including batter-frying). [31] The flesh can also be eaten raw or pickled. [32] [33]

The primary market forms for fresh bass include headed and gutted (with the head and organs removed) and filets; the primary market forms for frozen bass include headed and gutted and loins. It can also be found in steaks, chunks, or whole. [30] Fresh striped bass is available year-round, [31] and is typically sold in sizes from two to fifteen pounds, and can be sold up to fifty pounds. [33]

Striped bass has firm and flavorful flesh with a large flake. [33] The hybrid striped bass yields more meat, has a more fragile texture, and a blander flavor than wild striped bass. [34] The fish has a mild and distinctive flavor. In recipes, it can be substituted for milder fish like cod, as well as for stronger fish like bluefish. Other fish can substitute it, including weakfish, tilefish, blackfish, small bluefish, catfish, salmon, swordfish, and shark. Striped bass is easily grilled in fillets, and is therefore popular in beach communities. [30]