Established in the Constitution of California, the governor's responsibilities also include making the annual State of the State address to the California State Legislature, submitting the budget, and ensuring that state laws are enforced. The position was created in 1849, the year before California became a state.

The current governor of California is Democrat Gavin Newsom, who was inaugurated on January 7, 2019.

A candidate for governor must be a U.S. citizen and a registered voter within the state. He or she must not have been convicted of a felony involving bribery, embezzlement, or extortion, and must not have served two terms since November 6, 1990. [2]

Election and oath of Governor

Governors are elected by popular ballot and serve terms of four years, with a limit of two terms, if served after November 6, 1990. [3] Governors take the following oath:

Governors take office on the first Monday after January 1 after their election.

Impeachment and removal by the legislature

The governor can be impeached for "misconduct in office" by the State Assembly and removed by a two-thirds vote of the State Senate.

Recall by the voters

Petitions signed by California state voters equal to 12% of the last vote for the office of governor (with signatures from each of five counties equal to 1% of the last vote for Governor in the county) can launch a gubernatorial recall election. The voters can then vote on whether or not to recall the incumbent Governor, and on the same ballot can vote for a potential replacement.

If a majority of the voters in the election vote to recall the Governor, then the person who gains a plurality of the votes in the replacement race will become Governor.

The 2003 California gubernatorial recall election began with a petition drive that forced Democratic Governor Gray Davis into a recall election. It was the first time that a California governor was voted out of office. He was replaced by Republican Arnold Schwarzenegger.

Current governor Gavin Newsom faced a recall election which he defeated on September 14, 2021. [4]

Relationship with the Lieutenant Governor

In practice, there is a gentlemen's agreement for the Lieutenant Governor not to perform more than perfunctory duties while the Governor is away from the state: this agreement was violated when Mike Curb was in office, as he signed several executive orders at odds with the Brown administration when Brown was out of the state. Court rulings have upheld the Lieutenant Governor's right to perform the duties and assume all of the prerogatives of Governor while the Governor is out of the state. [5]

The Lieutenant Governor is also the president of the California State Senate. 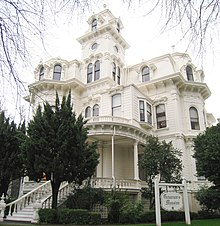 The California Governor's Mansion, official residence of the governor.

Stanford Mansion is the official reception center for the Californian government and one of the official workplaces for the governor.

The official residence of Californian governor is the California Governor's Mansion, in Sacramento. The mansion has served as the residence of 14 governors, while others have declined to reside in the mansion, preferring to arrange for private residential arrangements. It is also one of the official workplaces for the governor.

The governor's primary official workplace is located within the California State Capitol in Sacramento.

The Stanford Mansion, in Sacramento, serves as one of the official workplaces for the governor, as well as the official reception center for the California government. 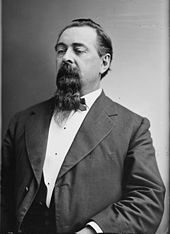 Romualdo Pacheco, the first governor to be born in California and the only Hispanic ever to serve. 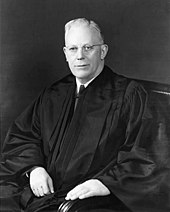 Earl Warren, the only governor to ever serve as Chief Justice of the U.S. Supreme Court.

Jerry Brown, the only governor to serve four terms. 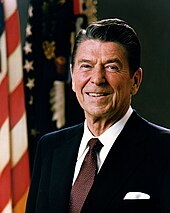 Ronald Reagan, the only Governor of California ever to serve as President of the United States.