San Benito County, officially the County of San Benito, is a county located in the Coast Range Mountains of the U.S. state of California. As of the 2010 census, the population was 55,269. [2] The county seat is Hollister. [4]

El Camino Real passes through the county and includes one mission in San Juan Bautista.

San Benito County was formed from parts of Monterey County in 1874.

The county is named after the San Benito Valley. Father Juan Crespí, in his expedition in 1772, named a small river in honor of San Benedicto ( Saint Benedict), the patron saint of the married, and it is from the contraction of this name that the county took its name.

Sharing a border with Santa Clara County, San Benito County lies adjacent to the San Francisco Bay Area and is sometimes considered a part of that region. Frequently, the county is associated with the Monterey Bay Area through governmental organizations such as the Association of Monterey Bay Area Governments as well as the Pajaro River, which flows from northern San Benito County into the Monterey Bay. However, the United States Census Bureau includes the county in the San Jose-Sunnyvale-Santa Clara MSA and the San Jose-San Francisco-Oakland CSA, which the Census uses as a statistical definition of the San Francisco Bay Area.

The county also borders Merced County and Fresno County on the east, which lead into California's San Joaquin Valley. It borders Santa Cruz County on the west and Monterey County on the southwest border.

The county is also the location of the Mount Harlan and San Benito American Viticultural Areas. The latter contains the Cienega Valley, Lime Kiln Valley, and Paicines AVAs. 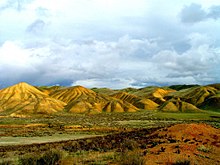 County government is overseen by a five-member elected Board of Supervisors, who serve four-year terms of office. Other elected county leaders include:

The San Benito County Sheriff provides court protection, jail management, and coroner service for the entire county. It provides patrol and detective services for the unincorporated areas of the county. Hollister (the County Seat) has a municipal police department.

San Benito is a Democratic-leaning county in Presidential and congressional elections. The last Republican to win a majority in the county was George H.W. Bush in 1988. San Benito is also considered a bellwether county for California in presidential elections; since 1904 the solitary candidate to carry the state without winning this county has been Harry S. Truman in 1948. [27] Before 1904, however, it was a solidly Democratic county whilst the state leaned Republican, voting Democratic in every election from its creation in 1876 up to and including 1900, although California only voted Democratic in 1880 and 1892. [27]

Cities by population and crime ratable

The economy is statistically included in metro San Jose, though the dominant activity is agriculture. Agritourism is growing as the county has destination wineries, organic farms and quaint inns with views of cattle grazing. With concerns about how oil and gas operations could impact this sector of the economy and agriculture in general, the county voters approved a measure in 2014 that bans well stimulation techniques such as fracking, acidizing and steam injection, along with conventional drilling in some areas. In the 1950s, the oil drilling industry had many wells and the county is over the Monterey Shale formation but there is very little activity now. [33]

According to the San Benito County Chamber of Commerce, [34] the top employers in the county are:

BenitoLink, a nonprofit news website was created in 2012 with the financial help of Knight Foundation, county residents and the Community Foundation for San Benito County. In December 2015, it became a separate 501(c)(3) nonprofit designed to serve all residents of San Benito County. BenitoLink is based in Hollister, Ca., the county seat. BenitoLink is dedicated to consistent coverage of local government and elected leaders. The community supported nonprofit was designed to invite the voice of the whole community and provide nonpartisan news and information. Residents can write in the COMMUNITY OPINION section by simply registering as a user. All content is reviewed prior to publication and must satisfy BenitoLink Terms of Use.

San Benito County Express provides fixed route service in the city of Hollister, and intercity service in the northern portion of the county. Service operates as far north as Gilroy, in Santa Clara County.

The population ranking of the following table is based on the 2010 census of San Benito County. [36]