From Wikipedia, the free encyclopedia
American politician from Missouri

Michael L. Parson (born September 17, 1955) is an American politician and former law enforcement officer who is the 57th Governor of Missouri, having taken office on June 1, 2018, after the resignation of Eric Greitens. Parson previously had been the 47th Lieutenant Governor of Missouri. [1] Before that, he served as a Republican member of the Missouri House of Representatives from the 133rd district (2005–2011) and as a member of the Missouri Senate representing the 28th district (2011–2017). Parson was the Majority Caucus Whip in the Senate during the 96th General Assembly. [2]

Parson was born on September 17, 1955, in Wheatland, Missouri, and raised on a farm in Hickory County. He graduated from Wheatland High School in 1973. [3]

Following his military service, in 1981 Parson returned to Hickory County to serve as a deputy. In 1983 he transferred to the Polk County Sheriff's Office to become its first criminal investigator. He purchased his first gasoline station, "Mike's," in 1984. The following year he started a cow and calf operation, becoming a third-generation farmer. [6] [4] Parson served 12 years as Polk County sheriff before being elected to the Missouri House of Representatives in 2004. [7]

Parson was first elected to the 133rd District in the Missouri House of Representatives in 2004. [3] He was subsequently re-elected in 2006 and 2008. In 2007 Parson co-sponsored a bill to expand Castle doctrine rights. [8]

In 2010 Parson signed the Americans for Tax Reform pledge not to raise any taxes. [9] 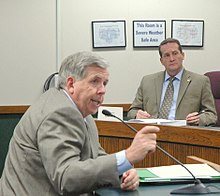 He won re-election in 2014, running unopposed in both the primary and general election. [11]

Parson initially announced he would run for governor in 2016, but opted to run for lieutenant governor instead. [12] After defeating two opponents in the Republican primaries, he faced Democratic former U.S. Representative Russ Carnahan, whom he defeated in the general election on November 8, 2016. [6]

During his campaign, Parson was criticized by his former chief of staff for allegedly proposing legislation on behalf of a lobbyist and a $50,000 plan to employ a valet for his vehicle. Parson claimed his former staffer was a "disgruntled former employee". [13]

Parson was sworn in along with Governor Eric Greitens on January 9, 2017. Noting that the Lieutenant Governor's office had not been upgraded in the past 12 years, Parson approved $54,000 in remodeling and renovation costs within his first two months. [14]

Parson with Sonny Perdue in 2017

In August 2017 multiple outlets reported that Parson was the only statewide elected official to accept gifts from a lobbyist. During his run for governor, Greitens called for a prohibition on lobbyist gifts. Parson's predecessor, Peter Kinder, also accepted gifts. [17] [18]

Following the allegations of improper care at the Missouri Veterans Home in St. Louis, which were first reported by the St. Louis Post-Dispatch in October 2017, Parson's office immediately launched an investigation. [19] [20]

On February 22, 2018, Greitens was indicted on felony invasion of privacy charges. [21] The indictment came a month after Greitens disclosed an extramarital affair, which only increased speculation that Parson could succeed Greitens should he step aside or be removed. [22] [23]

On June 18, 2018, Parson appointed fellow Republican Mike Kehoe, Missouri Senate Majority Leader, as Lieutenant Governor. The appointment came with legal uncertainty, as the Constitution of Missouri states that the governor can fill all vacancies "other than in the offices of lieutenant governor, state senator or representative, sheriff, or recorder of deeds in the city of St. Louis". However, Parson stated that he believed that the Constitution gave him authority to tap Kehoe as lieutenant governor. [25] [26] On June 19, 2018, the Missouri Democratic Party filed a lawsuit in an attempt to undo Kehoe's appointment. [27] The Democrats lost their lawsuit in the Cole County Circuit Court due to a lack of standing and the vagueness of the state law which states it can't be done but does not provide a process to fill the position. Oral arguments were heard on November 7, 2018. [28] [29] On April 16, 2019, the Missouri Supreme Court ruled that the appointment was legal. [30]

In December 2018, Parson proposed repealing a voter-approved constitutional amendment to establish nonpartisan redistricting of state House and Senate districts. The Associated Press estimated that a nonpartisan redrawing of districts would likely increase Democrats' share of state House and Senate seats. At the same time, Parson expressed support for making it harder to put issues up for ballot referendum. [31]

On January 16, 2019, Parson delivered his first State of the State Address to a Joint Session of the 100th Missouri General Assembly, and his speech focused on two core priorities, workforce development and infrastructure. [32]

In April 2019, Parson was given a Person of the Year award by the Missouri Association of Workforce Development for his related efforts across the state. [33]

On May 24, 2019, Governor Parson signed bill HB 126, known as the Missouri Stands for the Unborn Act, criminalizing abortions in the state of Missouri after eight weeks of pregnancy. Under the law, any person who performs an abortion after eight weeks could be charged with a Class B felony punishable by 5 to 15 years in prison. The bill, passed in both General Assembly chambers the week before after debate and protest, does not have exceptions for victims of rape or incest, but does have an exclusion for cases of medical emergencies. [34]

In 1985 he married his wife, Teresa. They have two children and lived in Bolivar, Missouri. [4]