From Wikipedia, the free encyclopedia
Place in California, United States

Eastern California is a region defined as either the strip to the east of the crest of the Sierra Nevada or as the easternmost counties of California.

According to the 2010 census, the population of the eastern border counties of California was 5,129,384. However, 4,224,851 (82.4%) lived in San Bernardino and Riverside counties, which are very large and whose populations are concentrated near Los Angeles and Orange counties to the southwest.

Eastern California's history differs significantly from that of the coastal regions and the Central Valley. Northeastern California is very sparsely populated (except for the area around Lake Tahoe): the three least-population counties of California lie in the northeast. [1] The area tends to be politically conservative, much like the rest of the rural Western United States. However, the counties of San Bernardino and Riverside form the 13th-largest metropolitan area of the United States, [2] [3] and El Dorado and Placer Counties are part of the Greater Sacramento area [2] and are culturally influenced by their respective metropolitan areas. Imperial County in the Southeast, though rural and agrarian, is heavily Democratic and has ties with the Mexicali Valley to the south.

Northeastern California has had strong ties to Nevada, with the exact boundary between the two states having once been a matter of dispute. [4] Residents of an area near Susanville, California tried to break away from the state in 1856, first by declaring themselves part of the Nataqua Territory [5] and then through annexation to Nevada. The two states further squabbled over ownership of Susanville in 1863. The town of Aurora, Nevada, was temporarily the county seat of both Mono County, California, and Esmeralda County, Nevada. Finally, the line between the two states was settled by a survey in 1892. [6]

The easternmost counties of California are (from north to south):

The following incorporated places have a population of 50,000 or greater, according to the most recent population estimates: [7]

Because Eastern California is generally in the rain shadow of the Sierra Nevada or the Transverse Ranges, the climate is extremely dry and can be considered a desert. Indeed, the hottest and lowest area in North America lies in Death Valley, in the heart of Eastern California.

Geologically, Eastern California is mostly part of the Basin and Range Province, marked by crustal extension, with horsts and grabens. Volcanism is also evident in this region.

The majority of Eastern California experiences two seasons, a long, dry summer and a milder winter in which the rain is concentrated. Most higher elevations experience four distinct seasons. There are some areas where the weather is very diverse. The Sierra Nevada mountain range has larger amounts of snowfall, while the Imperial Valley has more arid conditions. [8] The Sierra Nevada's average temperature is around 47 degrees Fahrenheit and the Imperial Valley is on average 73 degrees Fahrenheit. A record-breaking heat temperature was recorded in Death Valley, at a scorching 134 degrees Fahrenheit on July 10, 1913. [9] With its low and often sporadic rainfall, California is susceptible to drought, and in many parts of the state including Eastern California, there is very high fire danger and there have been several devastating wildfires. [10] 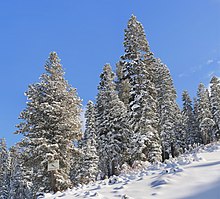 The northern counties of Eastern California are heavily timbered areas. The timber industry is a major contributor to the economy from sale of timber and forest products and the number of jobs that it provides. These timbered areas not only provide valuable income, but are also the main growing sector for the economy for recreation and tourism. In the Sierra Nevada National Forests they experience 50 million recreational visitor days per year. [11] When California became a state, it was one of the leading producers of these timber and forest products. Since then, it has held the third place for the top producer of softwoods since the 1940s. In California there were five counties that contributed to 55 percent of the wood harvested for the state. One of those counties, Plumas, is located in Eastern California. [12] 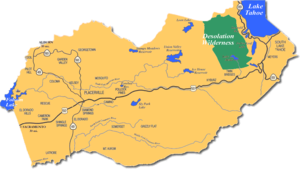 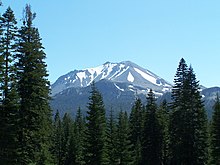