From Wikipedia, the free encyclopedia
Section of plants
This article is about the "North American" blueberry. For the "European" blueberry, see Bilberry.
For other uses, see Blueberry (disambiguation). 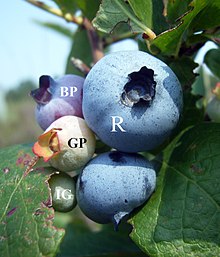 Blueberries are perennial flowering plants with blue or purple berries. They are classified in the section Cyanococcus within the genus Vaccinium. Vaccinium also includes cranberries, bilberries, huckleberries and Madeira blueberries. [1] Commercial blueberries—both wild (lowbush) and cultivated (highbush)—are all native to North America. The highbush varieties were introduced into Europe during the 1930s. [2]

Origin and history of cultivation 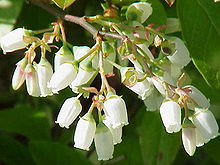 Flowers on a cultivated blueberry bush

The genus Vaccinium has a mostly circumpolar distribution, with species mainly present in North America, Europe, and Asia. [1] Many commercially sold species with English common names including "blueberry" are from North America, particularly Atlantic Canada and Northeastern United States for wild (lowbush) blueberries, and several US states and British Columbia for cultivated (highbush) blueberries. [3] [4] Canada's First Nations people consumed wild blueberries for centuries before North America was colonized. [3] Highbush blueberries were first cultivated in New Jersey around the beginning of the 20th century. [4]

North American native species of blueberries are grown commercially in the Southern Hemisphere in Australia, New Zealand and South American nations. [5] The Colombian or Andean blueberry, Vaccinium meridionale, is wild-harvested and commonly available locally. Several other wild shrubs of the genus Vaccinium also produce commonly eaten blue berries, such as the predominantly European Vaccinium myrtillus and other bilberries, which in many languages have a name that translates to "blueberry" in English.

Five species of blueberries grow wild in Canada, including Vaccinium myrtilloides, Vaccinium angustifolium, and Vaccinium corymbosum which grow on forest floors or near swamps. [6] Wild (lowbush) blueberries are not planted by farmers, but rather are managed on berry fields called "barrens". [3]

Wild blueberries reproduce by cross pollination, with each seed producing a plant with a different genetic composition, causing within the same species differences in growth, productivity, color, leaf characteristics, disease resistance, flavor, and other fruit characteristics. [6] The mother plant develops underground stems called rhizomes, allowing the plant to form a network of rhizomes creating a large patch (called a clone) which is genetically distinct. [6] Floral and leaf buds develop intermittently along the stems of the plant, with each floral bud giving rise to 5-6 flowers and the eventual fruit. [6] Wild blueberries prefer an acidic soil between 4.2 to 5.2 pH and only moderate amounts of moisture. [6] They have a hardy cold tolerance in their Canadian range. [6] Fruit productivity of lowbush blueberries varies by the degree of pollination, genetics of the clone, soil fertility, water availability, insect infestation, plant diseases, and local growing conditions. [6] Wild (lowbush) blueberries have an average mature weight of 0.3 grams (1⁄128 oz). [6]

Highbush (cultivated) blueberries prefer sandy or loam soils, having shallow root systems that benefit from mulch and fertilizer. [7] The leaves of highbush blueberries can be either deciduous or evergreen, ovate to lanceolate, and 1–8 cm (1⁄2–3 1⁄4 in) long and 0.5–3.5 cm (1⁄4–1 3⁄8 in) broad. The flowers are bell-shaped, white, pale pink or red, sometimes tinged greenish.

The fruit is a berry 5–16 mm (3⁄16–5⁄8 in) in diameter with a flared crown at the end; they are pale greenish at first, then reddish-purple, and finally dark purple when ripe. They are covered in a protective coating of powdery epicuticular wax, colloquially known as the "bloom". [8] They have a sweet taste when mature, with variable acidity. Blueberry bushes typically bear fruit in the middle of the growing season: fruiting times are affected by local conditions such as climate, altitude and latitude, so the time of harvest in the northern hemisphere can vary from May to August.

Note: habitat and range summaries are from the Flora of New Brunswick, published in 1986 by Harold R. Hinds, and Plants of the Pacific Northwest coast, published in 1994 by Pojar and MacKinnon.

Some other blue-fruited species of Vaccinium:

Commercially offered blueberries are usually from species that naturally occur only in eastern and north-central North America. Other sections in the genus are native to other parts of the world, including the Pacific Northwest and southern United States, [10] South America, Europe, and Asia. Other wild shrubs in many of these regions produce similar-looking edible berries, such as huckleberries and whortleberries (North America) and bilberries (Europe). These species are sometimes called "blueberries" and sold as blueberry jam or other products.

The names of blueberries in languages other than English often translate as "blueberry", e.g. Scots blaeberry and Norwegian blåbær. Blaeberry, blåbær and French myrtilles usually refer to the European native bilberry ( V. myrtillus), while bleuets refers to the North American blueberry. Russian голубика ("blue berry") does not refer to blueberries, which are non-native and nearly unknown in Russia, but rather to their close relatives, bog bilberries (V. uliginosum).

Cyanococcus blueberries can be distinguished from the nearly identical-looking bilberries by their flesh color when cut in half. Ripe blueberries have light green flesh, while bilberries, whortleberries and huckleberries are red or purple throughout.

Blueberries are sold fresh or are processed as individually quick frozen (IQF) fruit, purée, juice, or dried or infused berries. These may then be used in a variety of consumer goods, such as jellies, jams, pies, muffins, snack foods, or as an additive to breakfast cereals.

Blueberry jam is made from blueberries, sugar, water, and fruit pectin. Blueberry sauce is a sweet sauce prepared using blueberries as a primary ingredient.

Blueberry wine is made from the flesh and skin of the berry, which is fermented and then matured; usually the lowbush variety is used.

Blueberries consist of 14% carbohydrates, 0.7% protein, 0.3% fat and 84% water (table). They contain only negligible amounts of micronutrients, with moderate levels (relative to respective Daily Values) (DV) of the essential dietary mineral manganese, vitamin C, vitamin K and dietary fiber (table). [11] Generally, nutrient contents of blueberries are a low percentage of the DV (table). One serving provides a relatively low caloric value of 57 kcal with a glycemic load of 6. [11]

So-called "wild" (lowbush) blueberries, smaller than cultivated highbush ones, have intense color. The lowbush blueberry, V. angustifolium, is found from the Atlantic provinces westward to Quebec and southward to Michigan and West Virginia. In some areas, it produces natural "blueberry barrens", where it is the dominant species covering large areas. Several First Nations communities in Ontario are involved in harvesting wild blueberries.

"Wild" has been adopted as a marketing term for harvests of managed native stands of lowbush blueberries. The bushes are not planted or genetically manipulated, but they are pruned or burned over every two years, and pests are "managed". [15]

Numerous highbush cultivars of blueberries are available, with diversity among them, each having individual qualities. A blueberry breeding program has been established by the USDA-ARS breeding program at Beltsville, Maryland, and Chatsworth, New Jersey. This program began when Frederick Vernon Coville of the USDA-ARS collaborated with Elizabeth Coleman White of New Jersey. [16] In the early part of the 20th century, White offered pineland residents cash for wild blueberry plants with unusually large fruit. [17] After 1910 Coville began to work on blueberry, and was the first to discover the importance of soil acidity (blueberries need highly acidic soil), that blueberries do not self-pollinate, and the effects of cold on blueberries and other plants. [18] In 1911, he began a program of research in conjunction with White, daughter of the owner of the extensive cranberry bogs at Whitesbog in the New Jersey Pine Barrens. His work doubled the size of some strains' fruit, and by 1916, he had succeeded in cultivating blueberries, making them a valuable crop in the Northeastern United States. [19] [20] For this work he received the George Roberts White Medal of Honor from the Massachusetts Horticultural Society.

The rabbiteye blueberry (Vaccinium virgatum syn. V. ashei) is a southern type of blueberry produced from the Carolinas to the Gulf Coast states. Production of rabbiteye blueberries was a focus in Texas in the early 21st century. [21] Other important species in North America include V. pallidum, the hillside or dryland blueberry. It is native to the eastern U.S., and common in the Appalachians and the Piedmont of the Southeast. Sparkleberry, V. arboreum, is a common wild species on sandy soils in the Southeast.

Blueberry bushes often require supplemental fertilization, [23] but over-fertilization with nitrogen can damage plant health, as evidenced by nitrogen-burn visible on the leaves. [22] [23]

In 2018, Oregon produced the most cultivated blueberries, recording 59 million kilograms (131 million pounds), an amount slightly exceeding the production by Washington. [26] In descending order of production volume for 2017, other major producers were Georgia, Michigan, New Jersey, California, and North Carolina. [27]

Hammonton, New Jersey claims to be the "Blueberry Capital of the World", [28] with over 80% of New Jersey's cultivated blueberries coming from this town. [29] Every year the town hosts a large festival which draws thousands of people to celebrate the fruit. [30]

Resulting from cultivation of both lowbush (wild) and highbush blueberries, Maine accounts for 10% of all blueberries grown in North America with 44,000 hectares (110,000 acres) farmed, but only half this acreage is harvested each year due to variations in pruning practices. [31] The wild blueberry is the official fruit of Maine. [32]

Canadian production of wild and cultivated blueberries in 2015 was 166,000 tonnes valued at $262 million, the largest fruit crop produced nationally accounting for 29% of all fruit value. [33]

British Columbia was the largest Canadian producer of cultivated blueberries, yielding 70,000 tonnes in 2015, [33] the world's largest production of blueberries by region. [34]

Atlantic Canada contributes approximately half of the total North American wild/lowbush annual production with New Brunswick having the largest in 2015, an amount expanding in 2016. [35] Nova Scotia, Prince Edward Island and Québec are also major producers. [36] Nova Scotia recognizes the wild blueberry as its official provincial berry, [37] with the town of Oxford, Nova Scotia known as the Wild Blueberry Capital of Canada. [38]

Québec is a major producer of wild blueberries, especially in the regions of Saguenay-Lac-Saint-Jean (where a popular name for inhabitants of the regions is bleuets, or "blueberries") and Côte-Nord, which together provide 40% of Québec's total provincial production. This wild blueberry commerce benefits from vertical integration of growing, processing, frozen storage, marketing and transportation within relatively small regions of the province. [39] On average, 80% of Québec wild blueberries are harvested on farms (21 million kg), the remaining 20% being harvested from public forests (5 million kg). [39] Some 95% of the wild blueberry crop in Québec is frozen for export out of the province. [39] 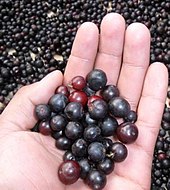 Highbush blueberries were first introduced to Germany, Sweden and the Netherlands in the 1930s, and have since been spread to numerous other countries of Europe. [2]

Blueberries were first introduced to Australia in the 1950s, but the effort was unsuccessful. In the early 1970s, the Victorian Department of Agriculture imported seed from the U.S. and a selection trial was started. This work was continued into the mid-1970s when the Australian Blueberry Growers' Association was formed. [41]

In the 21st century, the industry grew in Argentina: "Argentine blueberry production has increased over the last three years with planted area up to 400 percent," according to a 2005 report by the U.S. Department of Agriculture. [42] "Argentine blueberry production has thrived in four different regions: the province of Entre Rios in northeastern Argentina, the province of Tucuman, the province of Buenos Aires and the southern Patagonian valleys", according to the report. [43] In the Bureau of International Labor Affairs report of 2014 on child labor and forced labor, blueberries were listed among the goods produced in such working conditions in Argentina. [44]

Canada No. 1 blueberries are all similar in size, shape, weight, and color—the total product can be no more than ten percent off-color and three percent otherwise defective. [47]

Because "wild" is a marketing term generally used for all low-bush blueberries, it is not an indication that such blueberries are free from pesticides. [48]