From Wikipedia, the free encyclopedia
Genus of trees
For other uses, see Hickory (disambiguation).
"Carya" redirects here. For the archaic nut-tree goddess, see Caryatis. For the walnut tree nymph in Greek mythology, see Hamadryad. For the other mythical figure of that name, see Carya (daughter of Dion). For the town of ancient Arcadia, Greece, see Carya (Arcadia).

Hickory is a type of tree, comprising the genus Carya, which includes around 18 species. [2] Five or six species are native to China, Indochina, and India ( Assam), as many as twelve are native to the United States, four are found in Mexico, and two to four are from Canada. [3] [4] A number of hickory species are used for products like edible nuts or wood.

Hickories are temperate rain forest trees with pinnately compound leaves and large nuts. Hickory flowers are small, yellow-green catkins produced in spring. They are wind-pollinated and self-incompatible. The fruit is a globose or oval nut, 2–5 cm (0.8–2.0 in) long and 1.5–3 cm (0.6–1.2 in) diameter, enclosed in a four-valved husk, which splits open at maturity. The nut shell is thick and bony in most species, and thin in a few, notably the pecan (C. illinoinensis); it is divided into two halves, which split apart when the seed germinates.

The name "hickory" derives from a Native American word in an Algonquian language (perhaps Powhatan). It is a shortening of pockerchicory, pocohicora, or a similar word, which may be the name for the hickory tree's nut, or may be a milky drink made from such nuts. [5] The genus name Carya is Ancient Greek: κάρυον, káryon, meaning " nut".

The genus Carya is in the walnut family, Juglandaceae. In the APG system, this family is included in the order Fagales. Several species are known to hybridize, with around nine accepted, named hybrids. [2] [6] Beaked hickory (Annamocarya sinensis) is a species formerly classified as Carya sinensis, but now considered its own genus, Annamocarya. 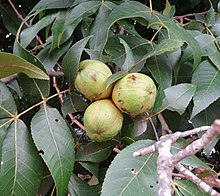 Hickory is used as a food plant by the larvae of some Lepidoptera species. These include:

The hickory leaf stem gall phylloxera ( Phylloxera caryaecaulis) also uses the hickory tree as a food source. Phylloxeridae are related to aphids and have a similarly complex life cycle. Eggs hatch in early spring and the galls quickly form around the developing insects. Phylloxera galls may damage weakened or stressed hickories, but are generally harmless. Deformed leaves and twigs can rain down from the tree in the spring as squirrels break off infected tissue and eat the galls, possibly for the protein content or because the galls are fleshy and tasty to the squirrels. The pecan gall curculio ( Conotrachelus elegans) is a true weevil species also found feeding on galls of the hickory leaf stem gall phylloxera.

The earliest ancestors of hickories are identified from Cretaceous pollen grains. The Carya as we know it first appears in Oligocene strata 34 million years ago. Fossils of early hickory nuts show simpler, thinner shells than modern species with the exception of pecans, suggesting that the trees gradually developed defenses to rodent seed predation. During this time, the genus had a distribution across the Northern Hemisphere, but the Pleistocene Ice Age beginning 2 million years ago completely obliterated it from Europe. The distribution of Carya in North America also contracted and it completely disappeared from the continent west of the Rocky Mountains. Since fossil records show North America as having the largest number of Juglandaceae species, it is likely that the genus originated there and later spread to Europe and Asia.

Some fruits are borderline and difficult to categorize. Hickory nuts (Carya) and walnuts ( Juglans) in the Juglandaceae family grow within an outer husk; these fruits are sometimes considered to be drupes or drupaceous nuts, rather than true botanical nuts. "Tryma" is a specialized term for such nut-like drupes. [8] [9]

Finished hickory in a cabinet

Hickory wood is very hard, stiff, dense and shock resistant. There are woods that are stronger than hickory and woods that are harder, but the combination of strength, toughness, hardness, and stiffness found in hickory wood is not found in any other commercial wood. [10] It is used for tool handles, bows, wheel spokes, carts, drumsticks, lacrosse stick handles, golf club shafts (sometimes still called hickory stick, even though made of steel or graphite), the bottom of skis, walking sticks, and for punitive use as a switch (like hazel), and especially as a cane-like hickory stick in schools and use by parents. Paddles are often made from hickory. This property of hickory wood has left a trace in some Native American languages: in Ojibwe, hickory is called mitigwaabaak, a compound of mitigwaab "bow" and the final -aakw "hardwood tree". [11] Due to its grain structure, hickory is more susceptible to moisture absorption than other species of wood, and is therefore more prone to shrinkage, warping or swelling with changes in humidity. [12]

Baseball bats were formerly made of hickory, but are now more commonly made of ash. Hickory is replacing ash as the wood of choice for Scottish shinty sticks (also known as camans). Hickory was extensively used for the construction of early aircraft.

Hickory is also highly prized for wood-burning stoves and chimineas because of its high energy content. Hickory wood is also a preferred type for smoking cured meats. In the Southern United States, hickory is popular for cooking barbecue, as hickory grows abundantly in the region and adds flavor to the meat.

Hickory is sometimes used for wood flooring due to its durability in resisting wear and character. Hickory wood is not noted for rot resistance.

A bark extract from shagbark hickory is also used in an edible syrup similar to maple syrup, with a slightly bitter, smoky taste. The Cherokee Indians would produce a green dye from hickory bark, which they used to dye cloth. [13] [14] When this bark was mixed with maple bark, it produced a yellow dye pigment.

The nuts of some species are palatable, while others are bitter and only suitable for animal feed. Shagbark and shellbark hickory, along with pecan, are regarded by some as the finest nut trees. Pecans are the most important nut tree native to North America. [3]

When cultivated for their nuts, clonal ( grafted) trees of the same cultivar cannot pollinate each other because of their self-incompatibility. Two or more cultivars must be planted together for successful pollination. Seedlings (grown from hickory nuts) will usually have sufficient genetic variation.

It is an excellent wood for fuel due to its density. [15]