The Florida Mall is a super regional enclosed shopping mall located south of Orlando in unincorporated Orange County, Florida, on the southeast corner of Orange Blossom Trail and Sand Lake Road; it opened in 1986. The facility was developed by a Joint Venture of Eddie DeBartolo of DeBartolo Realty & JCP Realty, Inc. (Subsidiary of J.C.Penney Company) starting in 1979-1984 ; it is currently managed by Simon Property Group, which owns 50%, having fallen to Simon following the 1996 merger of Simon and DeBartolo Realty into Simon DeBartolo Group. With 1,699,571 sq ft (157,900 m2) of gross leasable area and 294 retailers, [1] it is one of the largest single-story malls in the United States and the largest mall in Central Florida.

The Florida Mall is mostly a draw for entertainment and normal mall retailers as the nearby Mall at Millenia handles most of Central Florida's upscale shopping.

The mall is anchored by Dillard's, Macy's, JCPenney, Sears, Dick's Sporting Goods, and the Crayola Experience.

Aerial view of The Florida Mall

The Florida Mall is located in an unincorporated area of Orange County, Florida south of the city of Orlando. The mall is close to Orlando International Airport and many other Orlando attractions including Universal Orlando Resort, Walt Disney World, SeaWorld Orlando, and International Drive. The Florida Mall is located at the southeast corner of the intersection between US 17/ US 92/ US 441 (Orange Blossom Trail) and SR 482 (Sand Lake Road) and is situated near the junction of SR 528 (Beachline Expressway) and Florida's Turnpike. [1] [2]

The Florida Mall has a gross leasable area of 1,718,000 square feet (159,600 m2) and contains over 250 stores, making it the largest mall in Central Florida. The mall is one level and is anchored by Dillard's, Macy's, JCPenney, Sears, Dick's Sporting Goods, and the Crayola Experience. Attached to the mall is The Florida Hotel & Conference Center, which contains 511 rooms. The Florida Mall contains numerous smaller stores and entertainment venues including the only American Girl and Disney Store locations in the Orlando area, one of five M&M's World locations in the world, Apple Store, Microsoft Store, A/X Armani Exchange, Banana Republic, Michael Kors, Zara, H&M, XXI Forever, Victoria's Secret, MAC Cosmetics, Sephora, and Bath & Body Works. The mall offers various dining options including 25 quick-service restaurants and 8 sit-down restaurants. The Florida Mall features a 105,000-square-foot (9,800 m2) Dining Pavilion that contains a total of 25 restaurants. The mall offers various services to shoppers including valet parking, currency exchange, and package and baggage check. The Florida Mall attracts over 20 million visitors annually, including domestic and international tourists to the Orlando area. [1] [2] 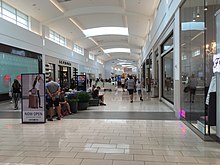 The mall opened on March 12, 1986 with Sears, JCPenney, Robinson's, Belk and the Crowne Plaza hotel. [3] In 1993, Dillard's opened at the east end. A new wing opened at the east end of the mall with an expanded Dillard's and Burdines (now Macy's) in 2000. Belk closed in 1996 and was replaced with Saks Fifth Avenue. Robinson's transitioned to Maison Blanche, then Gayfers, then Parisian, and finally was replaced with Lord & Taylor in 2002. The east wing was expanded again in 2002 with Central Florida's first and only Nordstrom, in order to compete with the newly built Mall at Millenia. [4] Burdines became Burdines-Macy's in 2004 and Macy's in 2005.

The hotel was built by E.J. DeBartolo and owned in partnership with Pratt Hotel Corporation of Dallas, TX. Originally branded as a Crowne Plaza, then as a Sheraton Plaza, the hotel was sold to Adam's Mark in 1996. In 2004 the hotel was purchased by a group headed by the Bank of Scotland and was renamed The Florida Hotel & Conference Center.

The Florida Mall later lost all of its luxury anchor stores, Lord & Taylor closed in 2006, three years after the company announced the store would close. [5] Saks Fifth Avenue closed in 2014 after it was chosen as one of the stores to be closed when purchased by Hudson Bay Co. A few months after Saks closed, the mall received its biggest loss when Nordstrom announced that it would be closing its Florida Mall location on August 16, 2014 due to underperforming sales compared to the rest of the stores. Retail analysts blamed the poor sales at the Nordstrom location at The Florida Mall on competition from the Mall at Millenia and outlet malls, a lack of local affluent shoppers in the Orlando area, and a higher demand for casual clothing over formal clothing. Many Orlando residents were upset after Central Florida's only Nordstrom was closed. It led to much controversy on whether or not Nordstrom would have done better in Orlando if it was located with more upscale shopping like at the Mall at Millenia. [4] [6]

Lord & Taylor was demolished in 2007 and turned into a new outdoor plaza with stores Forever 21, H&M and Zara in 2009, with American Girl being added in the Fall of 2014. In June 2015, Nordstrom was divided into Dick's Sporting Goods and the Crayola Experience. The Saks Fifth Avenue store was gutted and was repurposed as a new wing with a new Dining Pavilion. The old food court was closed and renovated into a new entrance to include more retail and dining space. the new stores are Champs Sports and Footaction that are next to the existing Foot Locker store. [7]

In 2017, Shake Shack opened at the mall in the space formerly occupied by Ruby Tuesday, which closed in June 2015.

In the spring of 2019, the mall hosted the Cirque du Soleil touring show Luzia under the big top.[ needs update] This limited engagement was the first time Cirque's iconic big top has been raised in the Orlando area.

In the winter of 2019, Mars Retail Group announced that their M&M's World Orlando location would be closing its Florida Mall shop and would be moving to Disney Springs in 2020. [8]

The Florida Mall was prominently featured in a 1989 episode of the TBS cable television series The New Leave It To Beaver.

Right next to the mall stretches SR 528 (Beachline Expressway) which has an interchange with US 17/ US 92/ US 441 ( Orange Blossom Trail) at exit 4. The exit is only few exits away from the Orlando International Airport. The mall is also accessible from exit 254 of Florida's Turnpike, which connects to Orange Blossom Trail.

The mall is serviced by Lynx buses (links) 7, 37, 42, 107, 108, 111, 418, and 441 at the Florida Mall SuperStop. The Florida Mall SuperStop has direct bus service from several points in the Orlando area including Lynx Central Station in Downtown Orlando, Kissimmee, Orlando International Airport, SeaWorld Orlando, and Universal Orlando Resort. [9] [10]