From Wikipedia, the free encyclopedia
(Redirected from Texas Urban Triangle)
region of Texas that contains the state's four largest cities
Megaregion of the U.S. in Texas, United States ----

The metro areas of the Texas Triangle megaregion in 2020.

The Texas Triangle is one of eleven megaregions in the United States, clusters of urban areas which share economic and cultural ties.

Additional MSAs in the region include Bryan-College Station, Killeen-Temple-Fort Hood, and Waco. Twelve micropolitan statistical areas are within the Triangle, which includes 66 counties. [7] Beaumont, located east of Houston, has been considered part of the Texas Triangle by numerous studies dating from 2000. [8] [9] [10] [11] [12] Burleson County is the center of the Texas Triangle. 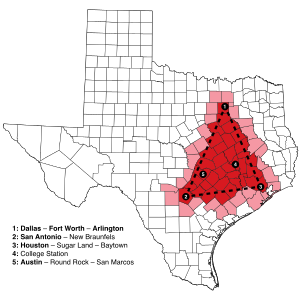 The cities and counties in or near the Texas Triangle, a megaregion of the US state of Texas: City names in bold in the map legend are in the top 10 most populous Texas cities.

The megaregion is defined in work by America 2050 and others. Dr. Robert Lang of the Metropolitan Institute at Virginia Tech characterized Dallas–Fort Worth as one of the earliest recognized megapolitans. Although each city is distinct, Dallas and Fort Worth developed closely enough to form the urban area widely known as " The Metroplex". A conference about the future of the Texas Triangle was held by Houston Tomorrow and America 2050 on September 24–25, 2009 in Houston.

The 60,000-square-mile (160,000 km2) region contains most of the state's largest cities and metropolitan areas, and in 2008 had a total of 17 million people and by 2020 had grown to nearly 21 million [3], nearly 75% of Texas's total population. [13] The region is comparable to Florida in population and comparable to Georgia in area, but the Texas Triangle comprises less than a quarter of Texas's total land area.

According to the University of Texas at Austin Center for Sustainable Development, "the Texas Triangle has three sides measuring 271, 198, and 241 miles in ground distance." [14]

Image of the Texas Triangle at night from the International Space Station in June 2013. Houston is at the bottom, Dallas at the top, and San Antonio at the far left (with Austin nearby).

Counties in the Triangle

The Texaplex Project refers to the online viral video and white paper that was produced by David Winans and MODassic Marketing as a response to the 2008 recession. [17] The short video cites many economic and population statistics in Texas. The video was freely distributed and shared across the web in an effort to counteract the bad economic news with good news. [18]