From Wikipedia, the free encyclopedia
Ecoregion of the United States
This article is about the Piney Woods ecosystem in Texas. For other uses, see Piney Woods (disambiguation).

The Piney Woods is a temperate coniferous forest terrestrial ecoregion in the Southern United States covering 54,400 square miles (141,000 km2) of East Texas, southern Arkansas, western Louisiana, and southeastern Oklahoma. These coniferous forests are dominated by several species of pine as well as hardwoods including hickory and oak. Historically the most dense part of this forest region was the Big Thicket though the lumber industry dramatically reduced the forest concentration in this area and throughout the Piney Woods during the 19th and 20th centuries. The World Wide Fund for Nature considers the Piney Woods to be one of the critically endangered ecoregions of the United States. [2] The United States Environmental Protection Agency (EPA) defines most of this ecoregion as the South Central Plains.

The Piney Woods cover a 54,400-square-mile (141,000 km2) area of eastern Texas, northwestern Louisiana, southwestern Arkansas and the southeastern corner of Oklahoma. [2] They are bounded on the east by the Mississippi lowland forests, on the south by the Western Gulf coastal grasslands, on the west by the East Central Texas forests and the Texas blackland prairies, on the northwest by the Central forest-grasslands transition, on the north by the Ozark Mountain forests. It receives 40-52 inches of precipitation annually. 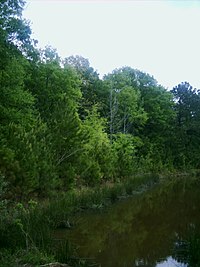 A creek running through the Piney Woods in Northeast Texas.

The region has heavy to moderate rainfall, with some places receiving over 60 in (1,500 mm) of rain per year. Longleaf, shortleaf, and loblolly pines, along with bluejack and post oaks, dominate sandhills. A well-developed understory grows beneath the sparse canopy, and includes yaupon holly and flowering dogwood. Pine savannas consist of scattered longleaf and loblolly pines alongside black tupelos, sweetgums, and in acid soils along creeks sweetbay magnolias. [2] Other common trees in this ecoregion include eastern redbud, red maple, southern sugar maple, and American elm. [3] American wisteria, a vine, may cover groves of trees

Two varieties of wetlands are common in the Piney Woods: bayous are generally found near rivers and sloughs are generally found near creeks. In bayous bald cypress, Spanish moss, and water lilies are common plants. [4] Sloughs are shallow pools of standing water that most trees are not capable of growing in. Other species, such as the purple bladderwort, a small carnivorous plant, have found niches in sloughs. A baygall is another type of wetland found the piney woods and other forest of the Gulf Coast states in the USA. [5] [6]

Hardy species of prickly pear cactus and yucca can be found in the forests where deep sands occur. [5]

Mammals such as eastern cottontail rabbits, eastern gray squirrels, Virginia opossums, nine-banded armadillos, white-tailed deer, North American cougars, gray foxes, bobcats, ring-tailed cats, Rafinesque's big-eared bats, and Seminole bat; [7] and reptiles such as western cottonmouths, prairie kingsnakes, slender glass lizards, and squirrel treefrogs, thrive in the Piney Woods. Birds include sandhill cranes, black and turkey vultures, northern mockingbirds, and the vulnerable red-cockaded woodpecker. American alligators are not as common as they once were, but their population has rebounded since the 1960s. Louisiana black bears are rare today, but still live in remote thickets. Recently, there has been significant talk of reintroducing the black bear into many parts of East Texas. [8] [9] The most common fish is catfish, which are a native species but also stocked in local reservoirs. Crayfish are common along river and creek banks.

The Piney Woods Region of the four state area is a noted area for Bigfoot (Sasquatch) sightings; with many legends dating back to pre European settlement. One such noted legend is the story of the Fouke Monster of Southern Arkansas; documented in the 1972 film The Legend of Boggy Creek. The area according to references lists this area to be the third highest in North America for these such sightings. Melanistic (black) cougars, another probable cryptid, have been noted by residents. [10] 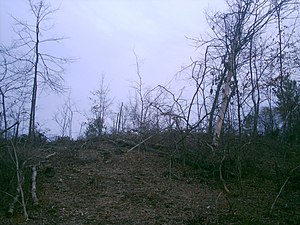 Newly cleared forest in East Texas. Most of the mature trees have been cleared and the litter layer—the bottom layer of decaying matter that enriches the soil with nutrients—of the forest has begun to wash away due to recent rains.

The majority of the commercial timber growing and wood processing in the state of Texas takes place in the Piney Woods region, which contains about 50,000 square kilometres (12,000,000 acres) of commercial forestland.

One National Preserve, the Big Thicket National Preserve, in the southern part of the Texas portion of the Piney Woods region, currently consists of fourteen named, non-contiguous units scattered across a wide area bounded roughly by Pine Island Bayou in Hardin County, Texas to the south, the Neches River bottom to the east (units on both sides of the river), the Trinity River to the west and Steinhagen Reservoir to the north. [11] The preserve contains ten distinct ecosystems according to the National Park Service. [12] Big Thicket National Preserve is one of two UNESCO Biosphere Reserves in Texas. [13] The preserve has also been listed as a Globally Important Bird Area by the American Bird Conservancy. The preserve was established in 1974 under 16 U.S. Code § 698 - Big Thicket National Preserve "...to assure the preservation, conservation, and protection of the natural, scenic, and recreational values of a significant portion of the Big Thicket area in the State of Texas..." [14] Since the preserve's inception, the Conservation Fund has helped to increase the amount of protected acreage by 33,000 acres (13,000 ha). [15]

The Arkansas portion of the Piney Woods has twelve state parks and one state forest:

The Texas portion of the Piney Woods has at least 17 state parks: