From Wikipedia, the free encyclopedia
U.S. county in Texas

Bell County is a county located in the central part of the U.S. state of Texas. As of the 2010 census, its population was 310,235. [1] Its county seat is Belton. [2] The county was founded in 1850 and is named for Peter Hansborough Bell, the third governor of Texas.

In 2010, the center of population of Texas was located in Bell County, near the town of Holland. [3]

In 1834–1835, Little River became part of Robertson's Colony, made up of settlers from Nashville, Tennessee, led by Sterling C. Robertson; they were the families of Captain Goldsby Childers, Robert Davison, John Fulcher, Moses Griffin, John Needham, Michael Reed and his son William Whitaker Reed, William Taylor, and Judge Orville T. Tyler. [4] This area became known as the Tennessee Valley. Soon after (1836) the settlements were deserted during the Runaway Scrape, [5] reoccupied, deserted again after the Elmwood Creek Blood Scrape, and reoccupied. Texas Ranger George Erath established a fort on Little River. [6]

During 1843–44, settlers began returning . [4] The next year, the Republic of Texas founded Baylor Female College (since developed as University of Mary Hardin–Baylor). [7]

In 1850, Bell County was organized and named for Texas Governor Peter Hansborough Bell. The population then was 600 whites and 60 black slaves. [4] Belton [8] was designated as the county seat in 1851.

The last serious Indian raid in the area occurred in 1859. [4] Bell County assumed its present boundaries [4] with the 1860 resurvey of the line between Bell and Milam Counties. 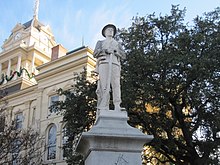 In 1861, the county voted for secession from the Union. [4] Residents were divided, as many yeomen farmers did not support the war. From 1862 to 1865, Union sympathizers and Confederate deserters holed up in "Camp Safety". [4] Following the war, new social movements developed. In 1867, the Belton Women's Commonwealth, the first women's movement in Central Texas, was formed by Martha McWhirter. The group provided shelter to women in abusive relationships. [4]

During the early years of the Reconstruction era (1865–1877), so much violence occurred in the county, the government stationed federal troops in Belton. Some racist whites attacked blacks and their white supporters. Corruption, lawlessness, and racial divides were severe. As in many areas, a local version of white paramilitary insurgents developed who were similar to the KKK; they worked to suppress black and Republican voting. [4]

The coming of railroads in the late 19th century stimulated growth across the state. In 1881, the Gulf, Colorado and Santa Fe Railway, the first railroad to be built in Bell County, established Temple as its headquarters. [4] Reflecting growth in the county, in 1884, the Bell County Courthouse was built. It is still used. The ambitious Renaissance Revival design was by architect Jasper N. Preston and Sons. [9] As another improvement, in 1905, the Belton and Temple Interurban electric railway was completed, providing service between the cities. [4]

During the 1920s, the Ku Klux Klan underwent a revival in Bell County. In many areas, it was concentrated on nativist issues, opposing Catholic and Jewish immigration from eastern and southern Europe. After a scandal involving the leader of the KKK, the group's influence declined markedly by the end of the decade. [4]

In 1925, Miriam A. Ferguson, a native of the county, was inaugurated as the first woman governor of the state. [10] She won re-election in 1932 for a nonconsecutive second term. [10]

The county and state supported founding Temple Junior College in 1926. The entry of the United States in World War II stimulated war spending across the country. In 1942, Fort Hood was opened as a military training base. It drew recruits from across the country. [4]

The postwar period was one of suburbanization in many areas. In 1956, the Killeen school board voted to integrate the local high school. This followed the Brown v. Board of Education (1954) ruling by the US Supreme Court that racial segregation in public schools, supported by all the taxpayers, was unconstitutional. [11]

The state founded Central Texas College in 1965 in Killeen. [11]

Since the late 20th century, new retail development has taken the form of large malls. In 1976, Temple Mall opened. [12] By 1980, Killeen had become the largest city in Bell County. [11] The next year, the Killeen Mall opened, adding to retail choices in the area. [13] In another type of development, in 1987, the Bell County Expo Center opened.

Since the late 20th century, the county has been the site of several mass shootings and unusual incidents of gun violence. On October 16, 1991, in what was called the Luby's shooting, disaffected employee George Jo Hennard, Jr., killed 23 people, and wounded 20 others, before killing himself. It was the largest mass murder by firearm in the United States to that time. [14] In 1995, Governor George W. Bush signed a new law easing restrictions on carrying handguns; it allows Texans to carry concealed weapons if they have a permit to do so. Texas overrode a 125-year-old ban on carrying weapons that had been signed and enacted by Governor E.J. Davis. [15] On November 5 in the 2009 Fort Hood shooting, Army Major Nidal Malik Hasan killed 13 people, and wounded 30. He was paralyzed in return fire. He had been described as mentally unstable. On April 2 in the 2014 Fort Hood shooting, Army Specialist Ivan Lopez killed three people and wounded 16.

The Hill Country Transit District operates a regularly scheduled fixed-route bus service within the urban areas of Killeen and Temple, as well as a paratransit service throughout the county. [22] Amtrak also has scheduled service to Temple.