From Wikipedia, the free encyclopedia
For the 2016 film, see Transpecos (film). 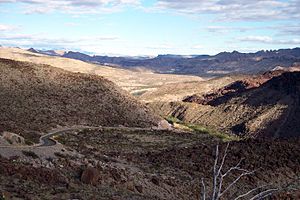 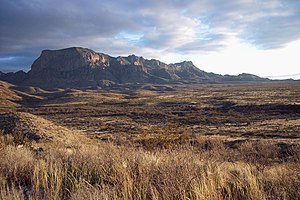 The Trans-Pecos, as originally defined in 1887 by the Texas geologist Robert T. Hill, is the portion of Texas that lies west of the Pecos River. [1] The term is considered synonymous with Far West Texas, a subdivision of West Texas. [2] The Trans-Pecos is part of the Chihuahuan Desert, the largest desert in North America. It is the most mountainous and arid portion of the state, and most of its vast area (outside the city of El Paso) is sparsely populated. Among the nine counties in the region are the five largest counties by area in Texas and eight of the eleven largest in the state. The area is known for the natural environment of the Big Bend and the gorge of the Rio Grande, part of which has been designated a National Wild and Scenic Rivers System. With the notable exceptions of Big Bend Ranch State Park, Big Bend National Park and the Guadalupe Mountains National Park, the vast majority of the Trans-Pecos region consists of privately owned ranchland. However, the majority of the region's population reside in the El Paso metropolitan area.

The Trans-Pecos region consists of nine counties: Brewster, Culberson, El Paso, Hudspeth, Jeff Davis, Pecos, Presidio, Reeves, and Terrell. Brewster County, the largest, has a land area of 6,193 sq mi (16,040 km2). The land area of Brewster County is about 10% larger than the state of Connecticut, yet it has a population density of only 1.4 persons per square mile compared to the 723 persons per square mile who reside in Connecticut. Terrell County, which borders both the Pecos River and the Rio Grande, is the least-populated county in the Trans-Pecos region. According to the United States Census of 2000, Terrell County had a total population of 984 residents occupying a land area of 2,358 sq mi (6,107 km2), resulting in a population density less than 0.5 persons per square mile.

The Trans-Pecos is a region of extremes, and at the opposite extreme from sparsely populated Terrell County is El Paso County, which is the smallest but most populated of the nine counties. El Paso County has a land area of only 1,015 sq mi (2,629 km2), yet it has a population of 800,647 individuals, resulting in a population density of 789 persons per square mile, a value that exceeds that of Connecticut. El Paso County makes up 93.5 percent of the region's total population.

Of its nine counties, Presidio is the most consistently Democratic, being like South Texas the longest-established Democratic stronghold in the nation. [3] El Paso has also been solidly Democratic since Ronald Reagan won the county in 1984. Jeff Davis is the most Republican county in the region, last being won for the Democratic Party by Jimmy Carter in 1976, [3] although even George W. Bush’s 66.79 percent of the vote in 2000 [4] stands modest compared to the 90 percent or more Republican vote common in Panhandle counties since the turn of the millennium. Hudspeth, Pecos and Terrell Counties, last won for the Democrats by Bill Clinton in 1996, [3] have become comparably Republican to Jeff Davis in the past couple of elections. The remaining three counties, especially Brewster County, have been “swing” counties since the 1970s, although Hillary Clinton consolidated Democratic majorities in Culbertson and Reeves counties in 2016.

Interstates 10 and 20 are the largest freeways in the Trans-Pecos region. Major federal highways include US Highway 90 and US Highway 67, which are partially cosigned; Highway 90 continues from Alpine east to Del Rio, while Highway 67 runs south from Marfa to the Mexico–United States border at Presidio/ Ojinaga, after which it continues as Mexican Federal Highway 16. State Highway 17 begins in Pecos and traverses Balmorhea State Park before joining Route 67 in Marfa, while State Highway 118 begins shortly after the junction of Interstates 10 and 20 near Kent and continues south to Study Butte at the entrance of Big Bend National Park.

The Trans-Pecos region contains three American Viticultural Areas: the Escondido Valley AVA, the Texas Davis Mountains AVA, and a portion of the Mesilla Valley AVA, most of which is in New Mexico.