From Wikipedia, the free encyclopedia
Governmental agency in Texas

The Texas Department of Transportation (TxDOT, pronounced "tex-dot") is a government agency in the American state of Texas. Though the public face of the agency is generally associated with the construction and maintenance of the state's immense state highway system, the agency is also responsible for overseeing aviation, [1] rail, [2] and public transportation [3] systems in the state.

At one time, TxDOT also administered vehicle registration; [4] but this function transferred to the Texas Department of Motor Vehicles, a state agency which began operations in November 2009. [5] [6]

The agency has been headquartered in the Dewitt C. Greer Building at 125 East 11th Street in Downtown Austin, Texas, since 1933. [7]

The Texas Legislature created the Texas Highway Department in 1916 to administer federal highway construction and maintenance. In 1975, its responsibilities increased when the agency merged with the Texas Mass Transportation Commission, to form the State Department of Highways and Public Transportation. [8] [9]

In 1986, the department started using " Don't Mess with Texas" as its slogan to reduce littering on Texas roadways, as part of a statewide advertising campaign. The phrase was prominently shown on road signs on major highways, as well as in television, radio, and print advertisements. The slogan is still in use and remains very popular. [10]

In 2009, the Texas Department of Motor Vehicles was created by the state legislature, [13] taking over some functions from TxDOT.

With approximately 12,000 employees, The executive director is currently James Bass. [14] Previously Bass served as chief financial officer since 2005. He is assisted by one deputy director and four assistant executive directors. The current interim Deputy Executive Director is Marc Williams. [15] The department is organized into 25 geographical districts and 34 divisions. 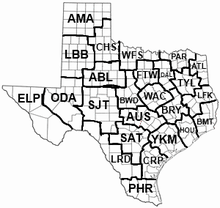 TxDOT is one of the state's largest departments in terms of the number of subordinate offices – it maintains 25 geographical districts throughout the state. The large number of departments is needed due to the large size of the state, the widely varying climate and soil conditions affecting public roads, and the differing needs of the local populace (urban vs. suburban vs. rural). In 2010, TxDOT was reorganized into four regions, North, South, East, and West. The regions are designated as Regional Support Centers. The number of districts remained the same. Each district, managed by a district engineer, is responsible for the design, location, construction, and maintenance of its area transportation systems. Local field offices within districts are known as area offices, and many districts also have separate maintenance offices, usually on a county-by-county basis. Functional divisions and offices headquartered in Austin provide administrative and technical support to the districts. 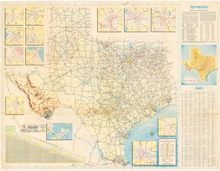 The 1956 edition of the Texas Official Travel Map: The Transportation Department has been publishing an official state road map since 1917.

Every month, TxDOT publishes Texas Highways, a magazine aimed at showcasing various aspects of the state, often by providing interesting travel information on a specific stretch of highway (or highways) in the state. TxDOT also publishes the annual Texas Travel Guide, which offers points of interests for all regions of Texas.

Horizon is a quarterly journal focusing on transportation policy issues and financing in particular.