From Wikipedia, the free encyclopedia
Department of the Texas state government

The Department of Public Safety (DPS) is a department of the government of the state of Texas. DPS is responsible for statewide law enforcement and vehicle regulation. The Public Safety Commission oversees DPS. However, under state law, the Governor of Texas may assume command of the department during a public disaster, riot, insurrection, formation of a dangerous resistance to enforcement of law, or to perform his constitutional duty to enforce law. [2] The commission's five members are appointed by the governor and confirmed by the Texas Senate, to serve without pay for staggered, six-year terms. The commission formulates plans and policies for enforcing criminal, traffic and safety laws, preventing and detecting crime, apprehending law violators and educating citizens about laws and public safety.

The agency is headquartered at 5805 North Lamar Boulevard in Austin. [3]

Due to increased traffic and the incremental damages caused by large trucks on the narrow state roads, the License and Weight Division was formed in March 1927. These new inspectors, the State Police, working from motorcycles would enforce motor vehicle laws and regulations. The Texas Rangers would continue to conduct the State's law enforcement investigations.

As a result of higher crime rates, the Texas Legislature in 1931 enrolled Griffenhagen and Associates to conduct a study on the effectiveness of their law enforcement program. The firm concluded the great expanse of Texas was too much for the Rangers or the License and Weight Division to handle appropriately. The fact that the State Highway Patrol did not enforce felony charges gave too much responsibility to the Rangers, who were already overworked. The report also was negative toward Texas utilizing the National Guard for law enforcement along the border. Recommendations were made to accumulate the necessary finances to create a state law enforcement agency. Four bureaus, Administration, State Police, Rangers, and Fire Prevention were suggested to be created with the implementation of the new force.

Not completely satisfied with the report, the Texas Senate created a committee to conduct its own survey of the State's law enforcement. As a result of the committee findings, on January 24, 1935 Senate Bill 146 was introduced. The bill created a Department of Public Safety housing the Rangers and the State Highway Patrol under one umbrella organization. The bill received final approval on February 18, 1935 and was sent to the House before finally ending up in a joint committee for final revisions. On May 3, 1935 the final bill was voted on and passed, but without two-thirds approval. [4]

On August 10, 1935 the formation of the Department of Public Safety along with 103 other bills were created by the Texas Legislature. [5] The newly formed department was the new home for the Texas Rangers, The Highway Patrol, and crime laboratory. [6]

While Governor James V. Allred signed Senate Bill 146 which created the DPS, it was the Legislature's responsibility of selecting three civilians as the Public Safety Commission. Selected were George W. Cottingham, Ernest R. Goens, and Albert Sidney Johnson. They in turn appointed Captain L.G. Phares as acting director and Homer Garrison Jr. as assistant director of the new agency. Phares was replaced by Colonel Horace H. Carmichael, who served until his death on September 24, 1938. Homer Garrison Jr. became the third director on September 27, 1938 and continued on as director for nearly 30 years until his death on May 7, 1968. Garrison made numerous improvements to the department during his storied career along with enhancing the training curriculum which was recognized by J. Edgar Hoover, director of the Federal Bureau of Investigation. [7] 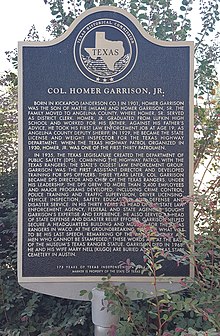 DPS is divided into multiple divisions:

In 2009, the Department of Public Safety created the Criminal Investigations Division (CID) as part of a major restructuring of the department. The CID consists of 700 members, including 573 commissioned officers and 129 civilian support personnel. The CID Assistant Director's Office consists of the assistant director, deputy assistant director, an administrative major, and four civilian support personnel.

The CID is divided into four different sections, which are specialized by function:

The Driver License Division is responsible for the issuing and revocation of Texas driver licenses and identification cards.

The Highway Patrol Division is the unit of the department most frequently seen by citizens. Uniformed troopers of the highway patrol are responsible for enforcing traffic and criminal law, usually in unincorporated areas, and serve as the uniformed Texas state police.

Troopers in the Highway Patrol Division also serve a capitol security role, as well as operating the DPS Bike Patrol, Motor Patrol, and Mounted Horse Patrol, all of which serve the Texas Capitol Complex in Austin.

The Intelligence and Counterterrorism Division (ICT) plays a leading role in the department's goal of combating terrorism and organized crime.

Arguably the most well-known division of the DPS is the Texas Rangers. Also known as "“Los Diablos Tejanos”—the Texas Devils". [8] The Rangers are responsible for state-level criminal investigations, among other duties. The Texas Rangers consists of 166 sworn Rangers. [9]

A horse back patrol mainly in Texas capital grounds.

Corruption inside DPS and FBI intervention