The J Line is a 38 mi (61 km) limited-stop bus route with some bus rapid transit features that runs between El Monte, Downtown Los Angeles and Gardena, with some trips continuing to San Pedro. It is one of the two lines in the Metro Busway system and is operated by the Los Angeles County Metropolitan Transportation Authority (Metro).

The J Line offers frequent, all-stops service along the El Monte Busway and the Harbor Transitway, two grade-separated transit facilities built into the Southern California freeway system. The line was created on December 13, 2009 as part of the conversion of high-occupancy vehicle lanes along the route into high-occupancy toll lanes (branded as Metro ExpressLanes) that allow solo drivers to pay a toll to use lanes. The tolls collected have been used to operate the J Line and to improve amenities at stops.

As J Line buses travel along the El Monte Busway and the Harbor Transitway they serve stations built into the center or side of the roadway. There is a 3.6 mi (5.8 km) gap between the western end of El Monte Busway and the northern end of the Harbor Transitway in Downtown Los Angeles, where J Line buses travel on surface streets, making a limited number of stops. Along the route, buses serve several of the region's major transportation centers including El Monte Station, Union Station, 7th Street/Metro Center station, and the Harbor Gateway Transit Center.

In 2020, the line was renamed from Silver Line to the J Line while retaining the color silver in its square icon.

Two services are operated under the J Line name:

J Line route 950 trips continue south of the Harbor Gateway Transit Center along the Harbor Freeway to San Pedro traveling in general purpose freeway lanes and making two stops en route at stations located on the side of the freeway near off and on ramps. In San Pedro, J Line route 950 buses once again travel along surface streets, serving the Harbor Beacon Park & Ride and making frequent stops along Pacific Avenue.

The J Line charges a premium fare (which is a different fare structure from most other Metro routes). [2] [3] Metro day passes are accepted as full fare, but all other pass holders must pay for an upgraded 1 zone pass or pay the additional premium charge at the time of boarding.

Like the other Metro Rail and Metro Busway lines, the J Line operates on a proof-of-payment system. [4] Passengers may board at either the front or rear door of J Line buses and validate their Transit Access Pass (TAP) electronic fare card at readers located on board the bus, near the door. Metro's fare inspectors randomly inspect buses to ensure passengers have a valid fare product on their TAP card.

TAP vending machines are available at most stations (except Carson and Pacific Coast Highway, which are expected to be removed from the line in 2021) and are located near most street stops in Downtown Los Angeles. But, because vending machines are not available at all stations and street stops, passengers who need to purchase a card or add funds can do so at the farebox on board the bus. None of the other Metro Rail or Metro Busway lines offer onboard TAP sales.

Metro and Foothill Transit offer a reciprocal fare program called "Silver 2 Silver" where pass holders may ride either J Line or Silver Streak buses between Downtown Los Angeles and the El Monte Station. [6] Passengers who have a Metro 7-Day or 30-Day pass, an EZ transit pass, or a Foothill Transit Local 31-Day pass are all charged additional when they board a J Line or Silver Streak bus. 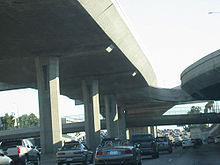 This elevated section of the Harbor Transitway carries the Metro J Line and the Metro ExpressLanes over the frequently congested Harbor Freeway.

The El Monte Busway opened along Interstate 10 in 1973. As the new Harbor Transitway was under construction in the early 1990s, Metro drew up plans to offer a unified bus rapid transit service along both corridors, connected by street running through Downtown Los Angeles; however, eventually the agency chose to increase service on the existing Harbor Freeway express lines and operate each as independent routes, mostly at peak hours. Ridership was radically lower than expected: planners had projected that 65,200 passengers would travel along the Harbor Transitway each day, but after 10 years ridership fell far below those predictions, with the route seeing just 3,000 passengers per weekday in 2004. [9]

In the early 2000s, Metro began depicting the two busways on its Metro Rail maps, and in 2008, Metro once again looked at the concept of linking them with a "Dual Hub Bus Rapid Transit" route. [10] The service was rolled out as the Silver Line in December 2009. Five Metro Express lines were truncated to terminate at either Harbor Gateway Transit Center or the El Monte station, where passengers would transfer to the Silver Line to continue into Downtown Los Angeles. [11]

As part of the Metro ExpressLanes project to convert the El Monte Busway and the Harbor Transitway from lanes reserved for buses and high occupancy vehicles into high occupancy toll lanes that allow solo drivers to pay a toll to use lanes, aging stations were refurbished and frequencies on the route were improved; the most drastic change was the complete reconstruction of El Monte Station which was demolished and entirely rebuilt, reopening in 2012. [12] LADOT added bus priority to traffic lights to improve on-time performance in Downtown Los Angeles in the same year. [13]

In 2015, Metro integrated the last remaining Metro Express route on the Harbor Transitway, the 450X to San Pedro, into the Silver Line. Originally a new express Silver Line service was added that served San Pedro and skipped many Harbor Transitway stations; but by June 2017, San Pedro-bound buses were serving all stations, the increase in speed being deemed not enough to justify increased crowding on local buses. [14]

A new transitway station for the Metro J Line and other transit buses operating on the El Monte Busway is being built to the south of the Patsaouras Transit Plaza in the median of the El Monte Busway. The project has been planned for years but has been beset by delays and an increasing budget.

When completed, the station will allow buses traveling in both directions on the busway to serve Union Station with a minimum of delay for passengers for other destinations. [15] [16] When the project is completed, a bridge will allow passengers to walk directly from the Patsaouras Transit Plaza to the busway station, thereby eliminating a long, convoluted walk across the Union Station property to the current stop located on the El Monte Busway at Alameda.

The project is now estimated to cost $51 million, well more than double the original estimate. The project is funded by tolls collected as a part of the Metro ExpressLanes project and a grant from the U.S. government. [18] [19]

As part of Metro's NextGen Bus Plan, the J Line would only operate between El Monte Station and Harbor Gateway Transit Center, eliminating the extension to San Pedro. Metro says the change would enable higher frequency on the J Line, would improve reliability and allow for the transition to battery-electric buses. Service to San Pedro would be shifted to a new line that would operate between San Pedro and the Harbor Freeway station via the I-110 Freeway, with a peak-hour extension to Downtown Los Angeles. [20] The changes are expected to be implemented in 2021.

Ridership has steadily grown on the J Line each year.

The on time performance of the Metro J Line is currently around 82.4%, defined as being less than 5 minutes behind schedule. [21] That places it far behind the Metro Rail lines (99% on time) and Orange Line (94% on time), but better than an average Metro bus route (80.6% on time). On time performance benefits from the active traffic management system installed as part of the Metro ExpressLanes project.

Seven passengers waiting on the northbound platform of the Harbor Freeway Station received critical and serious injuries when a private vehicle entered the station and struck the platform on February 22, 2012. [22] After the accident Metro studied the design of the stations and decided to add concrete filled metal bollards at the platform edge of a number of stations during August 2012. [23] The bollards are spaced close enough to stop a car from entering the platform, but have enough room to allow multiple buses to stop at the platform and lower the accessibility ramp.

The Metro J Line is operated with a fleet of dedicated NABI Metro 45C "CompoBus" coaches. Each 45-foot (14 m) long bus is made of light composite materials and is powered by compressed natural gas. Coaches are painted or vinyl wrapped with a special grey livery that matches the design of newer Metro Rail vehicles and the coaches used on G Line.

Metro plans to transition the J Line to battery-electric buses by the end of 2021. [24]