Pico-Robertson is a relatively densely-populated neighborhood in the Westside of Los Angeles, California, flanked on the north, northeast, and west Beverly Hills, on the east by Carthay and Mid-City, on the south by Mid-City, Beverlywood and Cheviot Hills. It is notable for its large Jewish population.

Pico-Robertson, as delineated by the Los Angeles Times 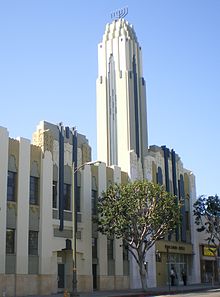 Bnai David–Judea building, a prominent sight in Pico-Robertson, once the home of Fox Stadium theatre

The 2000 U.S. census counted 18,019 residents in the 1.03-square-mile Pico-Robertson neighborhood—an average of 17,468 people per square mile, among the highest population densities for the city. In 2008, the city estimated that the population had increased to 19,253. The median age for residents was 36, older than the city at large; the percentages of residents aged 19 to 34 and 65 and older were among the county's highest. [1]

The neighborhood is home to a substantial Jewish community, with over six major Jewish private schools, and over thirty kosher restaurants (including Chinese, Mexican, Israeli, Thai, Delis, Steakhouses, and more), over twenty Synagogues, and five mikvahs. [2]

In 2000, the median yearly household income in 2008 dollars was $63,356, an average figure for Los Angeles. The average household size of 2.1 people was low for Los Angeles. Renters occupied 73.1% of the housing stock and house- or apartment owners held 26.9%.

Relation of Pico-Robertson to nearby places, not necessarily contiguous:

Smaller neighborhoods within Pico-Robertson include: 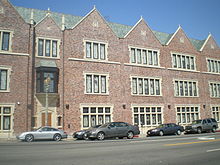 Chabad campus on Pico Blvd. in Pico-Robertson, in a collegiate style reminiscent of Brooklyn, New York

Forty-eight percent of residents aged 25 and older possessed a four-year degree in 2000, a high rate for both the city and the county. The percentages of those residents with a master's degree was considered high for the county. [1]

There are no public schools within Pico-Robertson. The six private schools in the neighborhood include: [3]