Buford Highway (also Buford Highway Corridor), a.k.a. the DeKalb International Corridor, [4] [5] and in the 1990-2000's as the DeKalb County International Village district, [6] is a community northeast of the city of Atlanta, celebrated for its ethnic diversity and spanning multiple counties including Fulton, DeKalb, and Gwinnett counties in the U.S. state of Georgia. The area generally spans along and on either side of a stretch of Georgia State Route 13 (SR 13) in DeKalb County. It begins just north of Midtown Atlanta, continues northeast through the towns of Brookhaven, Chamblee, and Doraville, and ends 1.3 miles (2.1 km) northeast of the Atlanta Bypass at the DeKalb–Gwinnett county line.

Buford Highway is an ethnically diverse, linear community made up of apartment complexes, suburban neighborhoods and shopping centers. Similar to other sun belt cities, immigrants who relocated to Atlanta in the 20th and 21st centuries went straight to the suburbs, where residential and commercial real estate was affordable and where many second-generation immigrant communities were already established. Along Buford Highway, there are few wholly distinct ethnic areas. The more than 1,000 immigrant-owned businesses are owned by and patronized by a wide variety of ethnic groups, [9] [10] notably Korean, Mexican, Chinese, and Vietnamese, and also Indian, Bangladeshi, Central American, Somali, and Ethiopian. The DeKalb County Chamber of Commerce calls the area the "International Corridor." [11]

The interior of the Buford Highway Farmer's Market

The Buford Highway community is home to one of the highest concentration of foreign-born residents in the country, notably Mexican, Central American, Chinese, Korean and Vietnamese. The area attracted many Latino workers during the construction boom that preceded the 1996 Olympic Games. Asian business owners were attracted to the stretch of highway by cheap leases and reliable traffic flow. [12]

In 2017, the man who came up with the idea for the BeltLine ring of trails around Atlanta, Ryan Gravel, announced that he would turn his attention to Buford Highway. His new non-profit named "Generator" would partner with another non-profit, We Love BuHi, to find ways to celebrate the diversity of the community and preserve its culture, with the aim of coming with realistic civic proposals around issues such as gentrification, transit and affordability. [13]

Buford Highway originated as a non-descript state roadway connecting Atlanta and points northeast, including the then-railroad towns of Chamblee and Doraville, as well as points farther north. The towns of Doraville, Chamblee and Norcross had long been home to a blue collar, largely white, lower middle-class population. The highway was characterized by strip mall development, and apartment complexes sprouted up in the 1960s and 1970s. [9] In 1976 the first ethnic restaurant opened, the Havana Sandwich Shop. In the 1980s, immigrants settled in the area due to affordable housing, available public transportation, and proximity to construction jobs in growing Gwinnett County. [14] The area attracted many Latino workers during the construction boom that preceded the 1996 Olympic Games. Asian business owners were attracted to the stretch of highway by cheap leases and reliable traffic flow. [12]

During the 1996 Olympics, Chamblee embraced the growing international character of Buford Highway, while more conservative Doraville resisted it. As the Southern Foodways Alliance reported:

"Why would we want to attract more immigrants when we got all we want?" asked Doraville mayor Lamar Lang to the press. "That's just not our way of life here," agreed the city council. "We’re basically Baptists and Methodists and Presbyterians." [14] 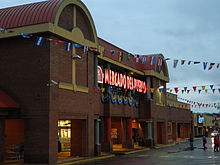 Buford Highway is, in most places in the corridor, a seven-lane highway with no median and few sidewalks, a situation which is grossly mismatched with the heavy pedestrian traffic along and across the highway.

Most properties along the corridor are in the form of strip malls, retail businesses surrounded by large parking lots, and large apartment complexes. The largest strip malls are the 466,000-square-foot (43,300 m2) Northeast Plaza, 355,000-square-foot (33,000 m2) Plaza Fiesta and the Buford Highway Farmers Market complex.

On July 22, 2010 PBS's Need to Know program portrayed the corridor as an example of a high- pedestrian area in suburban America that fails to meet increased demand for walkability due to changing demographics. [15] The program noted that in the previous ten years, 30 people had died and an additional 250 were injured while trying to cross Buford Highway, a rate three times higher than any other road in Georgia. Despite this, there are no plans to improve pedestrian safety in the unincorporated area of the corridor.

In 2017 the City of Brookhaven announced that the highway in their city would be improved by reducing the number of traffic lanes, adding a greenway and island. [17]

Buford Highway is served by MARTA bus route 39 ( Lindbergh Center to Doraville) as well as privately run minibuses. [18] Also, the Doraville MARTA metro rail station is a block away from Buford Highway.

The city of Chamblee, in which part of the Buford Highway community is located, is sometimes referred to as "Chambodia" due to its high Asian population and the concentration of Asian restaurants along Buford Highway in Chamblee. A chapter of Tom Wolfe's novel A Man in Full is titled "Chambodia". [19] [20]