Joseph Taylor Robinson (August 26, 1872 – July 14, 1937), also known as Joe T. Robinson, was an American politician from Arkansas. A member of the Democratic Party, he served as the 23rd Governor of Arkansas, as the Majority Leader of the United States Senate, and was the Democratic vice presidential nominee in the 1928 presidential election.

After studying law at the University of Virginia, Robinson returned to Arkansas, winning election to the Arkansas General Assembly. He won election to the United States House of Representatives, serving from 1903 to 1913. He won election as Governor of Arkansas in 1912, but resigned from that position in 1913 to take a seat in the Senate. In the Senate, Robinson established himself as a progressive and strong supporter of President Woodrow Wilson. Robinson served as the chairman of the 1920 Democratic National Convention and won election as the Senate Minority Leader in 1923. He sought the Democratic presidential nomination in the 1924 election and was nominated as the Democratic vice presidential nominee in 1928. The Democratic ticket of Al Smith and Robinson lost in a landslide to the Republican ticket of Herbert Hoover and Charles Curtis.

The Democrats took control of the Senate after the 1932 Senate elections and elected Robinson as Senate Majority Leader. He passed Franklin D. Roosevelt's New Deal programs through the Senate, alienating some of his colleagues with his autocratic style. In the midst of debate over the Judicial Procedures Reform Bill of 1937, Robinson died of heart failure.

In 1912 Robinson was elected Governor of Arkansas. He resigned his U.S. House seat on January 14, 1913 and took office as governor on January 16. However, U.S. Senator Jefferson Davis had died on January 3, after the legislature had re-elected him to a new term beginning March 4, 1913; his seat was now open. On January 27, 1913, only 12 days after Robinson took office as governor, the legislature elected him to the U.S. Senate to replace Davis.

Robinson became the last U.S. Senator elected by a state legislature rather than by direct popular vote. The Seventeenth Amendment, which required direct election, took effect on April 8, 1913. All the other Senators elected to terms starting in 1913 had been elected earlier; Senator James H. Brady of Idaho was elected to fill a vacancy on January 24; he was next to last.

Robinson resigned as governor on March 8, 1913. Although he served as governor for only 55 days, he worked to provide funds to complete the new state capitol building, create a labor statistics board, adopt an official state flag, and create a highway commission.

From the outset, Robinson impressed other Senators with carefully crafted speeches. He mastered the Senate's complex rules and practices; he possessed tenacious loyalty to friends and party, a passion for detail, and a killer's instinct in debate. Wedded to his job, he arrived early each day, stayed late, and studied legislation at home. [1]

He staunchly supported the policies of President Woodrow Wilson even as other Democrats faltered. He championed the Keating-Owen Child Labor Act and worked to enact bills to regulate railroads and other key industries. He led the Senate to arm merchant ships and voted to declare war on Germany. [2] He also led the unsuccessful effort in the Senate to ratify the Treaty of Versailles. [3]

Robinson was regarded as a progressive in Woodrow Wilson's image. [4] [5] Robinson gained influence in the Senate and later served as Chairman of the 1920 Democratic National Convention. [3] Robinson was re-elected to the Senate in 1918, 1924, 1930, and 1936. In 1923, the Senate Democratic floor leader Oscar Underwood, who served as the Senate Minority Leader, resigned due to illness. [3] Senior Democratic Senator Furnifold Simmons was expected to take Underwood's place, but withdrew his name from consideration after Robinson challenged him for the position. [3] By unanimous acclamation, Robinson became the Democratic leader, a position he would hold until his death in 1937. [3]

As minority leader, Robinson took over the distribution of patronage appointments and reformed the committee assignment process, decreeing that no senator would hold the top Democratic position in more than one important committee. [3] A Capitol Hill resident, he never strayed far from the Senate chamber, but kept a constant watch over the proceedings in order to capitalize on any dissension within the Republican ranks. [3] Known as a "horse trader," he made deals on both sides of the aisle and helped facilitate negotiations with the era's GOP presidents. [3] 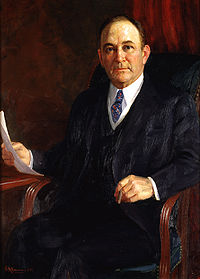 Robinson had presidential aspirations of his own. [3] In 1924, he was a minor contender for the Democratic nomination. A "favorite son" candidate, he drew the support of his Arkansas constituents and the southern conservative members of his party. [3] That year, however, his performance on a golf course brought him more attention than his short-lived race for the presidency. [3] At the Chevy Chase Country Club (a favorite haunt for Washington politicians), a fellow golfer asked to move ahead of the senator's slow-playing foursome. [3] Robinson refused to extend the courtesy to the local surgeon. [3] After a few angry words, he hit the doctor, knocking him to the ground. [3] The club expelled Robinson from its membership, and the press gave him a new title; he was now the "pugilist" senator. [3]

Robinson was the Democratic candidate for vice president in 1928, as the running mate of Alfred E. Smith. Early in 1928, Robinson clashed with Senator James Thomas Heflin, a Democrat from Alabama, who frequently inserted anti-Catholic sentiments into many of his speeches. [3] When New York's Catholic governor, Alfred E. Smith, announced his candidacy for president, Heflin made Smith the target of his criticism. [3] Robinson admonished his views, stating that religious affiliation had no bearing on a person's credentials for higher office. [3] On one famous occasion, he declared, "I have heard [the senator] denounce the Catholic Church and the Pope of Rome and the cardinal and the bishop and the priest and the nun until I am sick and tired of it, as a Democrat." [3] Helfin retorted, "The Senator from Arkansas can not remain leader of the Democrats and fight the Roman Catholics' battle every time the issue is raised in this body." [3] Interpreting the remark as a challenge to his authority, Robinson held a vote of confidence to gauge his colleagues' loyalty. [3] By a near unanimous vote (Heflin was absent), the senators pledged their support to their leader and his stance against bigotry. [3]

Though Smith lost to Republican candidate Herbert Hoover, [3] Robinson emerged from the campaign a national figure, now known for the impassioned speeches he had made around the country on behalf of Smith and the Democratic platform. [3] He continued to score victories as the Senate's minority leader, but his cooperative relationship with Hoover riled the members of his party. [3] They understood that no other senator possessed Robinson's tenacity and influence, however, so they accepted his leadership, infuriating as it could be. [3]

Robinson became Senate Majority Leader by a unanimous vote in 1933 when the Democrats became the majority. [3] He was the first Democrat to serve as formally designated Majority Leader. [3] He took his duties seriously, refusing to delegate his numerous responsibilities. [3] Some Senators resented his autocratic style. In debate he could be terrifying. He would grow red in the face, pound his desk, gesture wildly, and stamp his feet. [1] As Franklin Roosevelt's New Deal "marshal," he ensured the passage of countless bills relating to the Depression and social policy, his most impressive victory being the Emergency Banking Act, which he pushed through both houses of Congress in seven hours. [3]

Richard L. Riedel, a Senate press gallery attendant in the 1920s and 1930s, recalled, "When [Robinson] would go into one of his rages, it took little imagination to see fire and smoke rolling out of his mouth like some fierce dragon. Even when he kidded me, he spoke in loud gasps while puffing his cigar. Robinson could make Senators and everyone in his presence quake by the burning fire of his eyes, the baring of his teeth as he ground out the words, and the clenching of his mighty fists as he beat on the desk before him." [6] 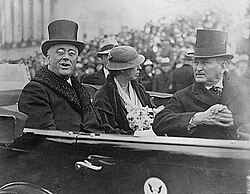 The press referred to him as "scrappy Joe", [3] and he nearly came to blows with Senate colleagues Robert La Follette, Porter McCumber, Thomas Heflin, and Huey Long. Once the United States entered World War I, Robinson denounced those senators who opposed the war effort. [3] After La Follette opposed it, Robinson questioned his patriotism on the Senate floor and La Follette almost got into a brawl with Robinson and had to be restrained. [3] His response to a guard who questioned his credentials at the 1920 Democratic National Convention was a punch in the face. [3] Despite this temper, he maintained strong friendships across party lines. [7]

In 1937, Robinson supported Roosevelt's proposal to restructure the United States Supreme Court (the " court-packing plan"). [3] This support may have occurred in part due to Roosevelt promising Robinson the next appointment to the Supreme Court. [8] Robinson had a much more difficult time with the president's Court Reorganization Act, designed to add liberal justices to the Supreme Court. [3] For weeks in 1937, he spoke, fought, and cajoled for the bill, but he could not stifle the criticism of scores of Republicans and Democrats. [3] The constant strain showed on his face and in the stoop of his shoulders, and his friends began to worry about his health. [3]

On July 14, just as the legislation seemed likely to split his party into two warring factions, Robinson's housekeeper found his pajama-clad body lying face down on the floor of his apartment in the United Methodist building on Maryland Ave, NE. [3] He died of heart failure. [3] Two days after Robinson's sudden death, stunned colleagues, friends, and family attended his funeral in the Senate chamber. [3] His casket, blanketed with flowers, rested in the green-carpeted pit, the site of his greatest speeches. [3] The Senate chaplain gave a brief sermon, and the Capitol Police escorted his body to a funeral train headed to Little Rock. [3] Thousands of mourners traveled to the Arkansas capitol to witness Robinson's lying-in-state ceremony and to express their grief and their enormous admiration for the majority leader: the "fightingest" man in the U.S. Senate. [3]

He is buried at the Roselawn Cemetery in Little Rock, Arkansas. His home in Little Rock, the Joseph Taylor Robinson House, was declared a National Historic Landmark in 1994.

Robinson is the namesake of Camp Joseph T. Robinson, Arkansas's primary National Guard base; Robinson Center in downtown Little Rock; and elementary, middle and high schools on the northwestern edge of Little Rock.

Robinson's face appears on the obverse of a United States half dollar produced for the 1936 Arkansas Centennial; he was one of only four men to appear on a U.S. coin while living. This was a commemorative issue not intended for regular circulation. A total of 25,265 coins were minted. [9]

Robinson is mentioned in True Grit, a novel by Arkansas writer Charles Portis. In an aside that illustrates the complexities of Southern political allegiances during the relevant period, Portis's narrator Mattie Ross says: "[ Grover Cleveland] brought a good deal of misery to the land in the Panic of ’93 but I am not ashamed to own that my family supported him and has stayed with the Democrats right on through, up to and including Governor Alfred Smith, and not only because of Joe Robinson."