Although it was never one of the leading parties in the United States, it was once an important force in the Third Party System during the late 19th and early 20th centuries. The organization declined following the enactment of Prohibition in the United States, but saw a rise in vote totals following the repeal of the Eighteenth Amendment in 1933. However, following World War II it declined with 1948 being the last time its presidential candidate received over 100,000 votes and 1976 being the last time it received over 10,000 votes.

The party's platform has changed over its existence. Its platforms throughout the 19th century supported progressive and populist positions including women's suffrage, equal racial and gender rights, bimetallism, equal pay, and an income tax. [1] The platform of the party today is progressive in that it supports environmental stewardship, animal rights, and free education, but is conservative on social issues, such as supporting temperance and advocating for a consistent life ethic. [2] [3] 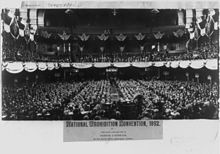 Prior to the formation of the Prohibition Party, temperance parties had been organized in several states. Charles Chapman had run in Connecticut under a Temperance Party banner in 1854, [4] and prohibitionists in Illinois formed the Illinois Temperance Party shortly after the American Civil War. [5]

In 1868 and 1869, branches of the International Organisation of Good Templars, a global temperance organization, passed resolutions supporting the creation of a political party in favor of alcoholic prohibition. From July 29 to July 30, 1868, the sixth National Temperance Convention was held in Cleveland, Ohio, and passed a resolution supporting temperance advocates to enter politics. On May 25, 1869, the Good Templars branch in Oswego, New York, called a meeting to prepare for the creation of a political party in favor of prohibition. Jonathan H. Orne was chosen as chairman and Julius A. Spencer as secretary of the meeting and a committee consisting of John Russell, Daniel Wilkins, Julius A. Spencer, John N. Stearns, and James Black was created to organize a national party. [6]

On September 1, 1869, almost five hundred delegates from twenty states and Washington, D.C., met at Farwell Hall in Chicago and John Russell was selected to serve as the temporary chairman and James Black as president of the convention. [7] The party was the first to accept women as members and gave those who attended full delegate rights. [8] [9] Former anti-slavery activist Gerrit Smith, who had served in the House of Representatives from 1853 to 1854 and had run for president in 1848, 1856, and 1860 with the Liberty Party nomination, served as a delegate from New York and gave a speech at the convention. The organization was referred to as either the National Prohibition Party or the Prohibition Reform Party. [10] [11]

In 1879, Frances Willard became the president of the Woman's Christian Temperance Union and although it had remained non-partisan in the 1876 and 1880 presidential elections, Willard advocated for a resolution under which the organization would pledge its support to whichever party would support alcoholic prohibition. Willard's attempts in 1882 and 1883 were unsuccessful, but she was successful in 1884 after her opponents left to join Judith Foster's rival Non-Partisan WCTU. [19] During the 1884 presidential election the organization sent its resolution to the Republican, Democratic, Greenback, and Prohibition parties and only the Prohibition Party accepted. At the Woman's Christian Temperance Union's 1884 national convention in St. Louis the organization voted 195 to 48 in favor of supporting the Prohibition Party and would continue to support the Prohibition Party until Willard's death in 1898. [20]

During 1884 election the party nominated John St. John, the former Republican governor of Kansas, who, with the support from Willard and the WTCU, saw the party poll 147,482 votes for 1.50% of the popular vote. However, the party was accused of spoiling the election due to Grover Cleveland's margin of victory over James G. Blaine in New York being less than John's vote total there. [21] In 1888, the party's presidential nominee, Clinton B. Fisk, was accused of being a possible spoiler candidate that would prevent Benjamin Harrison from winning, but Harrison won the election even though he lost the national popular vote. [22]

From January to February, 1892, Willard met with representatives from the Farmers' Alliance, People's Party, National Reform Party, and the remainder of the Greenback Party in Chicago and St. Louis in an attempt to create a fusion presidential ticket, but the organizations were unable to agree to a platform. [23] [24] The People's Party would later fuse with the Democratic Party in the 1896 presidential election.

The party suffered a schism at the 1896 Prohibition convention between the "narrow gauger" faction which only supported having an alcoholic prohibition plank in the party's platform and the "broad gauger" faction which supported the addition of free silver and women's suffrage planks. After the narrow gaugers successfully chose the presidential ticket and the party platform, the broad gaugers, led by former presidential nominee John St. John, Nebraska state chairman Charles Eugene Bentley, and suffragette Helen M. Gougar, walked out and create and created the breakaway National Party, nominating a rival ticket with Bentley as president and James H. Southgate as vice president. [25] The Prohibition party ticket of Joshua Levering and Hale Johnson had the worst popular vote performance since Neal Dow's 10,364 votes in 1880, but still outperformed the National Party's 13,968 votes. Following the 1896 election most of the members of the National Party became disillusioned with that party and returned to the Prohibition party, but those who remained reformed into the Union Reform Party and supported Seth H. Ellis and Samuel Nicholson during the 1900 presidential election. [26]

At the same time, the Prohibition Party's ideology broadened to include aspects of progressivism. The party contributed to the third-party discussions of the 1910s and sent Charles H. Randall to the 64th, 65th, and 66th Congresses as the representative of California's 9th congressional district. Democrat Sidney J. Catts of Florida, after losing a close Democratic primary, used the Prohibition line to win election as Governor of Florida in 1916; he remained a Democrat.

On February 4, 1918, the Prohibition affiliate in California voted in favor of merging with the National Party, which was created by pro-war defectors from the Socialist Party of America in 1917. [31]

On January 16, 1919, the Eighteenth Amendment, which prohibited "intoxicating liquors" in the United States, was ratified by the requisite number of states. Although it was suggested that the organization should be disbanded due to national alcoholic prohibition being achieved, the committee leaders changed the focus of the organization to supporting the enforcement of prohibition. In 1921, the organization petitioned for any non-citizens who violated the Eighteenth Amendment to be deported and for citizen violators to lose their right to vote. At the 1924 national convention the party approved a platform with only two planks, namely, supporting religion in public schools and the assimilation of immigrants. [32]

During the 1928 presidential election some members of the party, including Chairman D. Leigh Colvin and former presidential nominee Herman P. Faris, considered endorsing Republican Herbert Hoover rather than running a Prohibition candidate and risk allowing Al Smith, who supported ending prohibition, to be elected. However, the party chose to nominate William F. Varney due to its feeling that Hoover was not strict enough on prohibition, although the affiliate in California gave Hoover an additional ballot line and in Pennsylvania the affiliate did not file presidential electors. [33] [34] [35] However, the party became critical of Hoover after he was elected president and during the 1932 presidential election D. Leigh Colvin stated that "The Republican wet plank, supporting the repeal of Prohibition, means that Mr. Hoover is the most conspicuous turncoat since Benedict Arnold." [36] Hoover lost the election, but national prohibition was repealed in 1933, with the 21st Amendment during the Roosevelt administration.

In 1950, when the party was $5,000 in debt, Gerald Overholt was selected to be the party's chairman. During the 1952 presidential election, Overholt and Stuart Hamblen, the presidential nominee, spent $70,000 and the party's debt was increased to $20,000. During the 1954 elections, the affiliates in Pennsylvania, Massachusetts, Indiana, and Michigan lost their ballot access although the party remained successful in Kansas, where the Prohibition sheriff of Jewell County was reelected, and in California, where the attorney general nominee received over 200,000 votes. [37]

In 1977, the party changed its name to the National Statesman Party, but Time magazine suggested that it was "doubtful" that the name change would "hoist the party out of the category of political oddity" and it changed its name back to the Prohibition Party in 1980. [38]

States of residence of every Prohibition presidential nominee.

One key area of disagreement between the factions was over who should control payments from a trust fund dedicated to the Prohibition Party by George Pennock in 1930. [43] The fund pays approximately $8,000 per year, and during the schism these funds were divided between the factions. [44] Dodge died in 2007, allowing the dispute over the Pennock funds to finally be resolved in 2014. [45] The party is reported as having only "three dozen fee-paying members". [46]

In 2015, the party rejoined the board of the Coalition for Free and Open Elections and became a qualified political party in Mississippi. [47] [48] In the 2016 election, the party nominated James Hedges and qualified for the ballot in three states, Arkansas, Colorado, and Mississippi, and earned 5,514 votes becoming the most successful Prohibition presidential candidate since 1988.

The Prohibition Party has nominated a candidate for president in every election since 1872, and is thus the longest-lived American political party after the Democrats and Republicans. 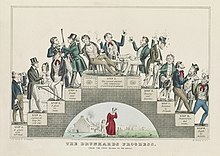 The Drunkard's Progress: A lithograph by Nathaniel Currier supporting the temperance movement, January 1846

The Prohibition Party platform, as listed on the party's web site in 2018, includes the following points: [61]

In 1867, John Russell became the first chairman of the Prohibition party, with Earl Dodge serving the longest for twenty four years and Gregory Seltzer serving the shortest for one year. [62]