The Democratic Party dominated politics until the late 1850s, followed by the newly founded Republican Party of Wisconsin. The Republican Party held sway for almost 100 years. Jacksonian democracy was strong in Wisconsin in the early days, until 1856 all territorial and state governors were Democrats, except for one Whig. In 1854, however, a coalition of Whigs, Antislavery Democrats, and Free Soilers formed a Republican Party in the state—a key event in the establishment of the national Republican Party. [3] From that point on, Republicans quickly gained control of most elected offices; from 1856 to 1959 there were only three Democratic governors. This period of time would last almost one hundred years, until the Democratic party would gain a stronger foothold within the state.

In the late 19th century, the Republican Party was primarily concerned with the special interests of railroads, the lumber industry and the concerns of unionized labor. [4] Along with these interests and the Republicans' ability to accumulate Federal funding for Wisconsin, gained the Republicans the support of many individuals in the working class, along with small business and Populist farmers. In the last decade of the 19th century, the Republican Party's progressive base, which was led by Robert La Follette, began to dominate Wisconsin state politics. The election of La Follette as governor in 1900 was the cornerstone of this movement. Democrats were virtually dormant in the state during this time.

The Republicans led by La Follette employed many progressive policies within in the state of Wisconsin. These policies during the twentieth century were rather influential with the masses, and helped spur their later success in the state of Wisconsin. [4] The Republicans' tight control of Wisconsin politics lasted until the 1950s, when Democrats altered some aspects of their party to become more aligned with the national party. These changes were consistent with the new social policies being called for by the national Democratic Party. The Democrats won their first major victory when William Proxmire was elected in the late 1950s. Wisconsin in the 1980s and early 1990s was characterized by competitive two-party politics for control of the governorship, other state constitutional offices, the state legislature, and U.S. Senate seats. [5]

The dawn of the 21st century has been a mixed one when it comes to control of state politics. The Democrats and Republicans in Wisconsin have both had multiple occasions of controlling either the State Assembly or the State Senate. The first decade of the twenty-first century has been an even balance between the parties fight for control of Wisconsin. During most of the 2010s, the Democrats were not in control of the governor's office, the Assembly, or the Senate. [6]. However in 2018, Democrat Tony Evers won the Governorship.

Many of these issues are addressed when the Party has their convention and they develop and vote on a party platform. The most recent party platform was created and voted on during the 2016 presidential election

In February 2011 the Republican-controlled state legislature, proposed the "2011 Wisconsin budget repair bill" also endorsed by Governor Scott Walker caused much controversy within the Democratic Party and the state of Wisconsin. The debate over first-term Republican Governor Scott Walker's call to stop just short of eliminating collective bargaining for most public employees divided Wisconsin and prompted a walkout by all 14 Senate Democrats. [7] A group of State Senators fled the state to halt the vote on the bill by denying a quorum. The fourteen were Tim Carpenter, Spencer Coggs, Tim Cullen, John Eprenbach, Dave Hansen, Jim Holperin, Robert Jauch, Chris Larson, Julie Lassa, Mark Miller, Fred Risser, Lena Taylor, Kathleen Vinehout, and Robert Wirch. The repair bill ultimately passed after a series of appeals and judicial rulings. An unsuccessful movement to recall Governor Walker began and ended in 2012. 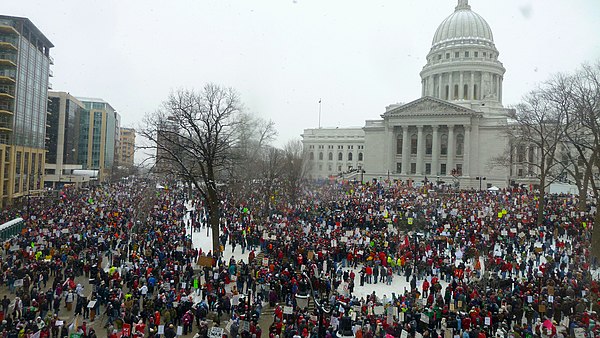 Democrats hold all statewide offices in Wisconsin. The following is a list of Democratic statewide, federal, and legislative office holders as of January 7, 2019:

Democrats comprise 4 of Wisconsin's 10-member Congressional delegation - including the Class I US Senator seat and 3 members of the House of Representatives.

Democrats have controlled Wisconsin's Class I seat in the U.S. Senate since 1957:

Out of the 8 seats Wisconsin is apportioned in the U.S. House of Representatives, 3 are held by Democrats: