Allen Granberry Thurman (November 13, 1813 – December 12, 1895) was a Democratic Representative, Ohio Supreme Court justice, and Senator from Ohio. He was the Democratic Party's nominee for Vice President of the United States in 1888.

Born in Lynchburg, Virginia, he and his family moved to Chillicothe, Ohio, when Thurman was young. Thurman established a legal practice in Chillicothe with his uncle, William Allen, who later represented Ohio in the U.S. Senate. Thurman won election to the House of Representatives in 1844, becoming the youngest member of that body. He supported the James K. Polk administration during the Mexican–American War and voted for the Wilmot Proviso, which would have banned slavery from any territory gained from Mexico. He served a single term in the House before joining the Supreme Court of Ohio. He won election to the Senate in 1869, becoming an opponent to the Republican Reconstruction policy. During the disputed 1876 presidential election, Thurman helped establish the Electoral Commission. Thurman lost re-election in 1881 as the Republicans had won control of the Ohio legislature.

Thurman was a favorite son candidate for president in 1880 and 1884. The 1888 Democratic National Convention selected him as President Grover Cleveland's running mate, as Vice President Thomas A. Hendricks had died in office. The aging Thurman did not actively campaign and the Democratic ticket was defeated.

He was born in Lynchburg, Virginia, to Pleasant Thurman and Mary Granberry Allen Thurman. Both of his parents were teachers; his father also a Methodist minister. In 1815, his parents emancipated their slaves and moved to Chillicothe, Ohio. He attended Chillicothe Academy, an academy run by his mother, and then studied law as an apprentice to his uncle, William Allen (who later became a Senator from Ohio). At the age of eighteen, Thurman worked on a land survey, and at twenty-one became private secretary to the Governor of Ohio, Robert Lucas. In 1835 he was admitted to the Ohio bar and became his uncle's law partner. In 1837 his uncle entered the Senate. On November 14, 1844, Thurman married Mary Dun Thomplins (or Tompkins), and they were the parents of three children.

The same year he was elected to the House of Representatives as its youngest member. He generally supported the majority of the Democrats on all issues except internal improvements, on which he tended to vote with the Whigs. He supported the Polk Administration's conduct of the Mexican–American War, spoke in favor of the 54°40' northern limit to the Oregon territory, and voted for the Wilmot Proviso, which would have banned slavery from the territory gained from Mexico. His support for the latter was due to anti-African-American prejudice, as he wanted to reserve this territory for white settlement. After a single two-year term, he left the House voluntarily to resume private law practice.

In 1851 he was elected to a four-year term (February 1852 – February 1856) on the Ohio Supreme Court, [1] the last year as the chief justice. He then returned to private law practice in Columbus. Thurman spoke out against the repeal of the Missouri Compromise and opposed the pro-slavery Lecompton constitution for Kansas. In 1860 he was a supporter of Stephen A. Douglas for President. He never accepted the right of a state to secede but felt it was unwise to fight a state that had already left the Union, and during the American Civil War he was opposed to Lincoln's policies, especially on emancipation. While he supported the war effort, he encouraged compromise and a political settlement. 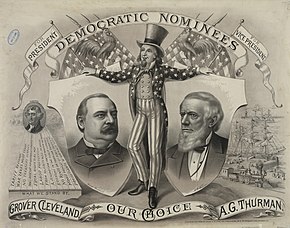 In 1867, he ran for Governor of Ohio, on a platform opposed to extending suffrage to blacks, but lost to Rutherford B. Hayes in a close election.

The Ohio voters chose a Democratic state legislature, however, which selected Thurman as senator for the term beginning in 1869. He there became a strong opponent of the Republicans' Reconstruction measures. In 1873 Thurman crafted a strategy that led to Ohio choosing once more a Democratic legislature, and electing Thurman's uncle William Allen as governor. The legislature elected Thurman to another term in the Senate. During the twelve years he served in the Senate, he became the leader of the Democrats in that body. He was known for constant hard work, good preparation, and courteous treatment of his opponents, and other members ranked him among the top three senators of his time, in terms of ability. He came nearest, a Washington correspondent concluded, to "the beau ideal of a Senator of any man on his side of the House. He has fine passing power of cutting up his political opponents, saying a word of encouragement to some Republican when he is down, and scattering the caucuses of the opposite side with a pistol shot." [2] His prepared speeches were clear and cogent, but it was in debate that he showed himself at his most picturesque. "He would wave his red bandana pocket handkerchief like a guidon, give his nose a trumpet-blast, take a fresh pinch of snuff, and dash into the debate, dealing rough blows, and scattering the carefully prepared arguments of his adversaries like chaff," a Washington long-time reporter remembered. [3] He kept up a close friendship with his chief sparring partner on the opposite side, George F. Edmunds of Vermont. Journalists told how at a given signal—a long blow of his nose—he would get ready to exit the Senate so that the two could meet in the Judiciary Committee room to share a liberal amount of Kentucky Bourbon. [4]

"When I speak of the law," Senator Roscoe Conkling of New York once said, "I turn to the Senator as the Mussulman turns towards Mecca. I look to him only as I would look to the common law of England, the world's most copious volume of human jurisprudence." [5] In particular he made himself the critic of giveaways to the large railroad corporations and of Republicans' Reconstruction policies. "A fine juicy roast of land grants is what sends Thurman's tongue a-wagging," wrote one reporter. [6]

In the 1876–1877 electoral college crisis, he helped to arrive at the solution of creating the Electoral Commission to settle the controversy, and ultimately served as one of the members of the commission, as one of the five Senators (one of the two Senate Democrats, and one of the seven Democrats altogether). As a Democrat, he voted with the seven-member minority, in favor of the Samuel J. Tilden electors in all cases, but the Republican majority prevailed in all the votes, and Thurman's 1867 gubernatorial opponent, Rutherford B. Hayes, became president. (One of the House of Representatives' members of the Commission, fellow Ohioan James Garfield, was to become the president four years later, after being chosen by the now-Republican Ohio legislature to succeed Thurman. Both men were lifelong friends.)

"To look at Thurman one would suppose that his favorite reading was "Foxe's Book of the Martyrs' and "Baxter's Saints' Rest,'" a reporter wrote, "for Thurman's face certainly carries a heavier pressure of solemnity to the square inch than any face I ever saw." In fact, he was a wide reader, fond of Voltaire, Chateaubriand, Renan, and the lighter French novels, and colleagues admitted him the best French scholar in the Senate. [7] He had picked up French from one Monsieur Gregoire, a tutor in his childhood, and in retirement continued reading French novels in the original language.

In the Senate, Thurman served on the Judiciary Committee, becoming its chairman when the Democrats won control of the Senate in the 46th Congress. He also became President pro tempore of the Senate briefly, serving as president of the Senate because of the illness of Vice-President William A. Wheeler, before Ohio chose a Republican legislature, which would not reelect Thurman. They first chose Garfield, but on his election to the Presidency, selected John Sherman to succeed Thurman beginning in 1881. Garfield did appoint Thurman as American representative to the international monetary conference in Paris, a selection that Republican senators welcomed: they regretted his departure from among them. It was noted that in twelve years in the chamber, he had never had an angry word with any colleague, and noted, too, that he left the Senate as poor as he had come to it. [8]

Thurman spent his retirement reading French novels in the original language, playing whist, and amusing himself with mathematical problems; he had a reputation as one of the best mathematicians in Ohio. He was put forth as a favorite son candidate in the Democratic presidential nominating conventions in 1880 and 1884. In 1888, he was selected as President Grover Cleveland's running mate, because Vice President Thomas Hendricks had died in office in November 1885. Democrats turned his red bandana handkerchief into an emblem of the campaign, tying red bandanas to the top of canes in political parades, and manufacturing bandanas with the candidates' faces on them. Thurman's appeal came from his popularity among old-line Democrats, distrustful of Grover Cleveland's liberalism, and his known hostility to railroad monopolists. All the same, Thurman, who had retired from active politics, could not put on an active campaign, and added little to the ticket's chances.

When Cleveland was renominated for his successful re-election to the presidency in 1892, Thurman was not again Cleveland's running mate as Adlai E. Stevenson was instead selected.

Vice President Morton was also dropped by President Harrison on the Republican ticket.

This meant that neither Thurman nor Morton were on their party's respective tickets for the Harrison-Cleveland rematch.

Thurman died at home in Columbus and is buried at Green Lawn Cemetery. [9]