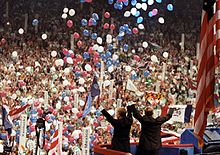 Carter and Mondale stand together at the end of the convention

The 1980 National Convention of the U.S. Democratic Party nominated President Jimmy Carter and Vice President Walter Mondale for reelection. The convention was held in Madison Square Garden in New York City from August 11 to August 14, 1980.

The 1980 convention was notable as it was the last time in the 20th century, for either major party, that a candidate tried to get delegates released from their voting commitments. This was done by Senator Ted Kennedy, Carter's chief rival for the nomination in the Democratic primaries, who sought the votes of delegates held by Carter.

After losing his challenge for the nomination earlier that day, Ted Kennedy spoke on August 12 and delivered a speech in support of President Jimmy Carter and the Democratic Party. Kennedy's famous speech eventually closed with the lines: "For me, a few hours ago, this campaign came to an end. For all those whose cares have been our concern, the work goes on, the cause endures, the hope still lives, and the dream shall never die." His speech was written by Bob Shrum. [1]

With the Kennedy delegates angry at losing the nomination contest, those who bothered to show up for the morning balloting decided to scatter their votes. Over 700 of them did not bother to make it on time, and it took several roll calls to conclude the first ballot. This is the last time during the 20th century that the Democratic Party had a roll call for the Vice Presidential spot.

President Carter gave his speech accepting the party's nomination on August 14. This was notable for his gaffe intended to be a tribute to Hubert Humphrey, whom he first called "Hubert Horatio Hornblower." [4]

On November 4, President Carter and Vice President Mondale lost to Ronald Reagan and George H.W. Bush in the general election, having lost both the popular election by 8,423,115 votes and the Electoral College by 440 votes. [5]