From Wikipedia, the free encyclopedia
For other people with the same name, see John Page (disambiguation).

Page was born and lived at Rosewell Plantation in Gloucester County. He was the son of Alice (Grymes) and Mann Page. His great-great-grandfather was Colonel John Page (1628–1692), an English merchant from Middlesex who emigrated to Virginia with his wife Alice Lucken Page and settled in Middle Plantation. He was the brother of Mann Page III.

John Page graduated from the College of William and Mary in 1763, where he was a friend and closest college classmate of Thomas Jefferson, having exchanged a great deal of correspondence. 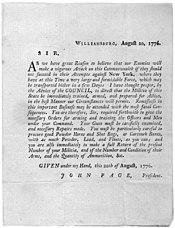 Broadside, order by John Page, president of the council, ordering state militia to be trained and prepared for battle, August 20, 1776

After his graduation from William and Mary, he then served under George Washington in an expedition during the French and Indian War. He was a delegate to the state constitutional convention in 1776. He also served during the American Revolutionary War as an officer in the Virginia state militia, raising a regiment from Gloucester County and supplementing it with personal funds. During that war, he attained the rank of colonel.

Page was also involved in politics. He became the Lieutenant Governor of Virginia and served 1776–1779. He was then a member of the Virginia House of Delegates 1781–1783 and 1785 – 1788. Page was elected to the First United States Congress and reelected to the Second and Third, and to the Fourth as a Republican. Overall, he was Congressman from March 4, 1789 to March 3, 1797.

After his terms in Congress, he was again a member of the Virginia House of Delegates in 1797, 1798, 1800, and 1801. He became the Governor of Virginia in 1802 and served to 1805. After being governor, he was appointed United States commissioner of loans for Virginia and held office until his death.

Page was instrumental in getting wife Frances' brother, Nathaniel Burwell, appointed to the Governor's council and together Page and Burwell opposed Lord Dunmore's proclamation against Patrick Henry. Page and Burwell building the council that read like a list of Patriots, there stand against Britain shaping the American Revolution.

In 1765, Page was married to Frances Burwell (1745–1784), daughter of Col. Robert "Robin" Burwell. Together, Frances and John were the parents of twelve children, though only seven lived to adulthood. Of the seven who survived to adulthood, five married children of Gov. Thomas Nelson, thereby forging a major alliance between the Page and Nelson families, there was also Burwell blood on both sides, the Burwell's by these marriages became close relatives of the Page and Nelson families for at least three generations.

After the death of his first wife in 1784, Page remarried to the early American poet, Margaret Lowther Page (1759–1835), who was host to a vibrant literary salon at the Rosewell Plantation. Page himself was also a poet who wrote several poems about national political issues, including Shay's rebellion and the Virginia Religious Disestablishment Act (Virginia Statute for Religious Freedom). Page's niece by marriage, Judith Lomax, was also a poet. [1]

Page died in Richmond, Virginia on October 11, 1808. He was interred in St. John's Churchyard in Richmond.

Page County, Virginia, located in the Shenandoah Valley, was formed in 1831 and named for Governor John Page. Also bearing his name is a residence hall at the College of William and Mary. [2]

Governor Page was quoted by George W. Bush in his inaugural address in 2001. Writing to his friend Jefferson shortly after the Declaration of Independence was published, Page said of the Declaration and the Revolution: "We know the race is not to the swift nor the battle to the strong. Do you not think an angel rides in the whirlwind and directs this storm". [3]