Francis Harrison Pierpont (January 25, 1814 – March 24, 1899), called the "Father of West Virginia," [1] was an American lawyer and politician who achieved prominence during the American Civil War. During the conflict's first two years, Pierpont served Governor of the Restored Government of Virginia and in this capacity administered the part of Virginia then under Unionist control (i.e. future West Virginia) prior to West Virginia's admission to the Union as a separate state. After recognizing the creation of West Virginia, Pierpont continued to serve as Governor of the Restored Government, although for the remainder of the war the degree of civil authority he was able to exercise was extremely limited. Having claimed to be the legitimate Governor of Virginia for the duration of the conflict, Pierpont assumed civil control of the state's entire post-1863 territory following the dissolution of the Confederacy and continued to serve as Governor during the early years of Reconstruction.

In recognition of his significance to its state history, in 1910 the state of West Virginia donated a marble statue of Pierpont as the second of its two contributions to the U.S. Capitol's National Statuary Hall Collection. [2]

He was the third son of Francis Peirpoint and was born at the Peirpoint "Plantation" in the "Forks of Cheat" on the Morgantown-Ices Ferry Road, Monongalia County. [3] His middle name, "Harrison," was added later by the boy's father in honor of his commanding officer, General William Henry Harrison.

Pierpont, the original family name, was altered to Peirpoint in the land office at Richmond, Virginia in issuing patents for land deeded to his grandfather, John Pierpont (1742-1796) who grew up in Fairfax County, Virginia and attended the Fairfax Friends Meeting, but left to enlist in the Revolutionary Army, then after it ended moved west to Morgantown, West Virginia. [4] Virginia lawyers advised the family that in order to hold their grandfather's land they must spell their last name as recorded in the patent. Thus Francis used the name "Peirpoint" throughout all of his life. Francis Harrison also utilized Peirpoint throughout most of his adult life, including during his terms as the Civil War and Reconstruction Governor of Virginia. In 1880, when President Garfield appointed him Collector of Internal Revenue, Peirpoint sent his name to the U.S. Senate as Francis H. Pierpont. [5] Pierpont writes that "He consented to the change of his name because it was right." [6]

While Frank was a boy, his family moved their leatherworking business to what is today Marion County, West Virginia. He was a great-grandson of Morgantown's founder Zackquill Morgan. Frank Pierpont was educated in a one-room schoolhouse and by his own reading. [7] Pierpont became linked with the region's history for the rest of his life. [8] After walking to Pennsylvania, he enrolled in and graduated from Allegheny College. Later, he taught school in Harrison County. Then he traveled and became an abolitionist after seeing slavery's abuses in Mississippi. [7]

He returned home to Fairmont and handled the family's tanning business as well as became active in the Methodist Church and began studying law. He was admitted to the bar in 1841. In 1848, Pierpont became the local attorney for the Baltimore and Ohio Railroad. Before entering politics, he also helped found Fairmont Male and Female Seminary, the forerunner to Fairmont State University. [8]

An active supporter of Abraham Lincoln, Pierpont became more involved in politics as an outspoken opponent of Virginia's secession from the Union. When Virginia seceded and entered the war, delegates from the northwestern counties of Virginia, which refused to join the Confederacy, met at the Wheeling Convention. [8] Declaring that their elected officials had abandoned their posts, a rump government was established in Wheeling, with Pierpont as the provisional Governor. Claiming to be the legitimate government of the entire Commonwealth of Virginia, the " Restored Government" drafted a new Virginia Constitution and sent representatives to the Union Congress. [2] The Second Wheeling Convention met on June 11, 1861, and on June 20, 1861, it unanimously elected Pierpont governor of the Restored Government of Virginia with the recognition of President Lincoln. [9] In 1862, Pierpont attended the Loyal War Governors' Conference in Altoona, Pennsylvania, organized by Pennsylvania Governor Andrew Gregg Curtin, which ultimately backed Abraham Lincoln's Emancipation Proclamation and the Union war effort. Pierpont was again elected governor for a four-year term on May 28, 1863 by the legislature. [9]

Under Pierpont's leadership, the Wheeling government called for a popular vote on the question of the creation of a new separate state. Despite a lack of overwhelming support and widespread fraud in the voting process, the Restored Government pressed the U.S. Congress for statehood, which also approved the issue. [10] The new state took the name West Virginia and was admitted into the Union in 1863. A lifelong West Virginian, Pierpont had hoped to become the new state's first governor. However, the Lincoln administration was keen to ensure the continuity of the Restored Government was not disrupted and made clear it would not countenance Pierpont leaving his post unless a suitable successor could be found, who for political reasons would have had to been a man with roots in the Commonwealth's post-1863 borders who was loyal to the Union, willing to recognize West Virginia, qualified to serve as a state governor and yet also willing to accept an office that it appeared would be little more than a figurehead position for an indeterminate period of time.

As no viable candidate willing to succeed Pierpont could be found, Arthur I. Boreman was elected governor for West Virginia while Pierpont reluctantly remained Governor of the "restored" state of Virginia. From 1863 until 1865, the Pierpont administration's de facto control was limited to those parts of the Commonwealth not claimed by West Virginia that were held by Federal arms - specifically, several Northern Virginia, Norfolk area and Eastern Shore counties. [2] While Pierpont claimed Richmond as the official state capital (as his administration had done since 1861), the de facto seat of government was established in Alexandria for the remainder of the Civil War. The pro-Confederate state government in Richmond maintained its claim to the Commonwealth's antebellum borders and administered the regions of the Commonwealth still held under Confederate arms - at the time of West Virginia's statehood this included at least some measure of control about thirteen counties claimed by the newly admitted state. In 1864 Pierpont called a Constitutional Convention in Alexandria that recognized West Virginia and abolished slavery, and promulgated the civil Constitution in force in Virginia until 1869. [11]

On May 9, 1865, one month after the surrender of the Army of Northern Virginia, President Andrew Johnson recognized Pierpont as the Governor of Virginia. [12] Pierpont immediately re-located the seat of government to Richmond. [13] 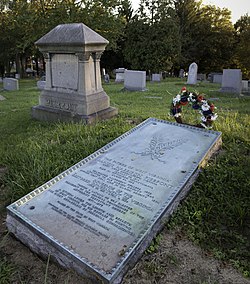 Pierpont followed a policy of forgiveness to those politicians who had served in the Confederate military and government. The Virginia government started to pass laws restoring ex-Confederates to their lost privileges, to the displeasure of most former Union Republicans. As the South became increasingly resistant to Reconstruction after the war, the United States Congress passed the Military Reconstruction Act of 1867. Through this Act, Virginia was designated the " First Military District" in 1868, and military commander John Schofield replaced Pierpont with Henry H. Wells until state delegates could write and enact a new constitution could be enacted. According to the Civil War historian Richard Lowe, Hiram Bond, a former Vanderbilt family functionary and friend of Grant, planned the removal of Pierpont and installation of Welles. Pierpont became one of the key figures in the Virginia constitutional convention of 1867–1868, which resulted in the Underwood Constitution of 1869. After this, Pierpont left Virginia politics and returned to his law practice in West Virginia. [13]

Pierpont subsequently was elected to one term in the West Virginia House of Delegates in 1870, but lost his seat when the Democrats took control of the state. [8] His last public office was as collector of Internal Revenue under President James Garfield. [2] After his retirement, he helped create the West Virginia Historical Society, as well as served as President of the Methodist Protestant Church.

He died at his daughter's home in Pittsburgh, Pennsylvania on March 24, 1899. [1] Three years later, his remains were relocated to Woodlawn Cemetery in Fairmont, West Virginia. They reside next to those of his wife Julia and three of their four children. [8]

A monument to Francis Pierpont was installed in Wheeling on West Virginia Day in 2015. [7]