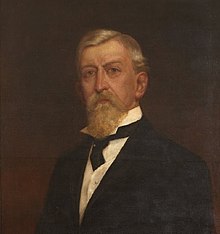 William Evelyn Cameron (November 29, 1842 – January 25, 1927) was an American soldier, lawyer, journalist, and politician. He served as the 39th Governor of Virginia from 1882–1886, elected as the candidate of the Readjuster Party headed by William Mahone. [1]

When the American Civil War started, Cameron abandoned his preparatory studies at Washington University in St. Louis. He stayed with the Missouri Minute Men at Camp Jackson until General Lyon dispersed the secessionists during what became known as Camp Jackson affair. Upon his return to Virginia, Cameron was elected as the second lieutenant of Co D, 12th Virginia Infantry. He was wounded in the Second Battle of Bull Run and promoted to captain in June 1863. Cameron served throughout the rest of the war in Mahone's Brigade. [2]

After the war, Cameron returned to Petersburg, where he married Louisa Clarinda Egerton (1846–1908) on October 1, 1868. They had three children.

Cameron read the law and passed the bar. He started to practice law, but decided to pursue a career in journalism. He was an editor for newspapers in Petersburg, Norfolk and Richmond, Virginia.

In 1869, Cameron fought a duel with Robert William Hughes, after Cameron criticized Hughes in print for the opportunism: he had changed his political views from pre-war Secessionist to post-war Republican. [3] According to the writer Frank Mott,

[T]he parties met at Chester Station, on the Petersburg Railroad; but, before they could exchange a shot, the police made their appearance, and caused a flight of the parties. They passed into North Carolina, where they fought on the 12th of June with pistols. Cameron was hit in the breast at the first fire, the ball striking a rib and glancing. Hughes demanded another fire, but the surgeons declared that Cameron could not deliver another shot, and the affair ended 'to the satisfaction of all parties.' [4]

Cameron became active in the Readjuster Party. He was elected as mayor of Petersburg, serving from 1876 to 1882.

In 1881, he was the gubernatorial candidate of the Readjuster Party and elected governor with biracial support defeating John Warwick Daniel (who represented the state Funder faction, a group who wanted to pay the debt and its interest in whole) by nearly 6% of the vote. During his term from 1882–1886, he attempted to implement his party's programs of debt reduction and racial integration in certain areas. In 1882 it led passage of legislation for a land-grant college for blacks, what is now Virginia State University in Ettrick, near Petersburg.

On February 17, 1882, Cameron personally led a successful anti- oyster pirate expedition of two boats and armed state militia in the ongoing Oyster Wars of the Chesapeake Bay, capturing seven ships. The state had attempted to license and control traffic in the popular seafood, but 5,800 Virginia oyster boats often disregarded laws related to trying to preserve the harvest. [5] An attempt at a repeat raid the next year ended in Cameron's steamships unsuccessfully racing the "laughing lasses" of the pirate sailboat Dancing Molly. [6] His embarrassment was compounded by fact that none of the alleged pirates captured in the second raid were convicted, but Cameron persevered and helped form the Board on the Chesapeake and its Tributaries to enforce oyster law. [5]

After his term as governor ended in 1886, Cameron briefly left Virginia. He returned and resumed a career in politics, but as a conservative Democrat. Cameron represented Petersburg in the Virginia Constitutional Convention of 1901–1902. At this time, the Democrat-dominated legislature created a disfranchising constitution and essentially ended black voting. The Republican Party, which had made a brief and small comeback after the collapse of the Readjusters, ceased to be competitive in the state.

Cameron served as editor of the Norfolk Virginian-Pilot newspaper from 1906 to 1919.

William Evelyn Cameron died on January 25, 1927 at the home of one of his sons in Louisa County, Virginia. He was buried at Blandford Cemetery in Petersburg.