Edmund Jennings Randolph (August 10, 1753 – September 12, 1813) was an American attorney and politician. He was the 7th Governor of Virginia, and, as a delegate from Virginia, he attended the Constitutional Convention and helped to create a national constitution. He was the 2nd Secretary of State and later the 1st United States Attorney General during George Washington's presidency.

Randolph was born on August 10, 1753 to the influential Randolph family in Williamsburg in the Colony of Virginia. He was educated at the College of William and Mary. After graduation he began reading law with his father John Randolph and uncle, Peyton Randolph. In 1775, with the start of the American Revolution, Randolph's father remained a Loyalist and returned to Britain; Edmund Randolph remained in America where he joined the Continental Army as an aide-de-camp to General George Washington. [1]

Upon the death of his uncle Peyton Randolph in October 1775, Randolph returned to Virginia to act as executor of the estate, and while there was elected as a representative to the Fourth Virginia Convention. He was later mayor of Williamsburg, and then Attorney general of Virginia, a post he held until 1786. [1] He was married on August 29, 1776 to Elizabeth Nicholas, the daughter of Robert C. Nicholas, and had a total of six children, including Peyton Randolph, Governor of Virginia from 1811 to 1812. [2]

Randolph was selected as one of 11 delegates to represent Virginia at the Continental Congress in 1779 and served as a delegate until 1782. He also remained in private law practice, handling numerous legal issues for Washington and others. [1]

Randolph was elected as Governor of Virginia in 1786. That year, he was a delegation to the Annapolis Convention. He had taken on the young John Marshall as a student and then law partner and transferred his lucrative law practice to Marshall when Randolph became governor in 1786 since Virginia law forbade executive officers from private practice in its courts. [3]

The following year, as a delegate from Virginia to the Constitutional Convention, at 34, Randolph introduced the Virginia Plan as an outline for a new national government. [5] He argued against the importation of slaves and for a strong central government and advocated a plan for three chief executives from various parts of the country. The Virginia Plan also proposed a bicameral legislature, both houses of which would have delegates chosen based on state population. Randolph proposed and was supported by unanimously by the Convention's delegates "that a Nationally Judiciary be established" (Article III of the U.S. Constitution would establish the federal court system). [6] The Articles of Confederation lacked a national court system for the United States.

Randolph was also a member of the " Committee of Detail," which was tasked with converting the Virginia Plan's 15 resolutions to a first draft of the Constitution.

Randolph ultimately refused to sign the final document, one of only three members who remained in the Constitutional Convention but refused to sign (the others were the fellow Virginian George Mason and Elbridge Gerry of Massachusetts). [7] Randolph thought the final document lacked sufficient checks and balances and published an account of his objections in October 1787. Randolph had several objections to the Convention's proposal. He thought that the federal judiciary would pose a threat to state courts, and he considered the Senate was too powerful and Congress's power too broad. He also objected to the lack of a provision for a second convention to act after the present instrument had been referred to the states. [1]

Randolph nevertheless reversed his position at the Virginia Ratifying Convention in 1788. He chaired the nearly equally-divided convention, and Mason (as one of the leaders of the opposition, along with Patrick Henry) greatly resented Randolph's change of position. Mason and other opponents demanded amendments prior to ratification. Randolph noted that he had seen several responses to the insistence that amendments were necessary before ratification. Some thought the objection to be insubstantial because the Constitution provided a process for amendment. In common with other advocates of amending the Constitution prior to ratification, Randolph insisted that it would be easier to amend the Constitution before its ratification, when a majority might do so, than to ratify an imperfect Constitution and then to assemble the votes of three fourths of the states. He did not think that it was desirable for the people to become accustomed to altering their constitution with any regularity once it was adopted.

Governor Randolph had written, "If after our best efforts for amendments, they cannot be obtained, I will adopt the constitution as it is."[ citation needed] Ultimately, Randolph said he voted for ratification of the Constitution because by June 2, eight other states had already done so, and he did not want to see Virginia left out of the new national government. Randolph believed that Virginia must choose between the stark alternatives of ratification and disunion. Randolph never doubted the union's advantages.

In the Richmond Ratification Convention, Randolph ultimately pointed the way to an understanding of ratification with which Virginia's leaders could be satisfied. He assured his fellow members of the Virginia political elite that the Constitution that it was being asked to ratify in the summer of 1788 would have very limited significance and that it would enter more a league of sovereign states than a consolidated union.

Randolph wrote that of the ten delegates whose views had been completely unknown, five had been swayed to vote for ratification by his tactics. In the end, Virginia's Federalists secured the Constitution's ratification by precisely five votes.

President Washington rewarded Randolph for his support. Randolph was appointed as the first U.S. Attorney General in September 1789 and maintained the precarious neutrality in the feud between Thomas Jefferson (of whom Randolph was a second cousin) and Alexander Hamilton. In Washington's cabinet, as in the ratification dispute of 1787–1788, Randolph tried to bring people together, rather than jump to hasty conclusions and ignore the potential costs in pursuit of self-righteous ideological purity. He continued to make important contributions to the structure of the new nation and to its relationship with the states. [1]

When Jefferson resigned as Secretary of State in 1793, Randolph succeeded him to the position. The major diplomatic initiative of his term was the Jay Treaty with Britain in 1794, but Hamilton devised the plan, wrote the instructions, and left Randolph the nominal role of signing the papers. Randolph, hostile to the resulting treaty, almost gained Washington's ear but was overridden in the wake of the Fauchet scandal (see below). Near the end of his term as Secretary of State, negotiations for Pinckney's Treaty were finalized.

Miss Nicholas was daughter of the Hon. Robert Carter Nicholas, State Treasurer. Randolph wrote to his children after his wife's death:

"We were both born in the city of Williamsburg, within twelve hours of each other; myself on the 10th of August 1753, and she on the 11th. My aunt Randolph, who saw each of us soon after our birth, facetiously foretold that we should be united in marriage-a circumstance which, improbable at the time from the dissensions of our families, seemed daily to grow into an impossibility from their increasing rancor. In childhood we were taught the elements of reading at the same school... she won me by the best of all graces, cheerfulness, good sense, and benevolence. I do not recollect that I reflected much upon that range of qualities, which I afterwards found to be constituents of nuptial happiness; but Providence seemed to be kinder to me than my most deliberate judgment could have been... I desired nothing more than that she should sincerely persuade herself that she would be happy with me." [8]

On August 29, 1776, they were joined in wedlock. The relations between Randolph and his wife had always been true and tender. So free from friction had been the course of their united lives that his daughters could not forget the single instance of misunderstanding. Mrs. Randolph having related some incident, her husband hastily exclaimed: "That is mere gossip." The lady repaired to her room and did not answer her husband's gentle knock. Randolph then said, "Betsey, I have urgent business in town, but I shall not leave this house until permitted to apologize to you." [9] The door opened, and the unprecedented scene ended.

On March 6, 1810, a blow came from which Randolph could not recover; his wife died. After Mrs. Randolph's burial, the heartbroken husband wrote some account of her and of their married life, which was addressed to his children as "the best witnesses of the truth of the brief history." [9]

In part of this account Randolph wrote, "My eyes are every moment beholding so many objects with which she was associated; I sometimes catch a sound which deludes me so much with the similitude of her voice; I carry about my heart and hold for a daily visit so many of her precious relics; and, above all, my present situation is so greatly contrasted by its vacancy, regrets, and anguish, with the purest and unchequered bliss, so far as it depended on her, for many years of varying fortune, that I have vowed at her grave daily to maintain with her a mental intercourse." [9]

A scandal involving an intercepted French message led to Randolph's resignation as Secretary of State in August 1795. Randolph had been tasked with maintaining friendly relations with France. [1] The British Navy had intercepted correspondence from the French ministe Joseph Fauchet to his superiors and turned it over to Washington, who was dismayed that the letters reflected contempt for the United States and that Randolph had been primarily responsible. The letters implied that Randolph had exposed the inner debates in the cabinet to France and had told it that the administration was hostile to the country. At the very least, Elkins and McKitrick conclude, there "was something here profoundly disreputable to the government's good faith and character."

Washington immediately overruled Randolph's negative advice regarding the Jay Treaty. A few days later, Washington, in the presence of the entire cabinet, handed the minister's letter to Randolph and demanded an explanation for it. Randolph was speechless and immediately resigned. Chernow and Elkins [10] [11] conclude that Randolph was not bribed by France but "was rather a pitiable figure, possessed of some talents and surprisingly little malice, but subject to self-absorbed silliness and lapses of good sense."

However, Randolph's own published Vindication illustrates his concerns regarding both public and private perceptions of his character, which held great value in the 18th century. In the event, Randolph secured a published retraction from Fauchet. [1]

After his resignation, Randolph was held personally responsible for the loss of a large sum of money during his administration of the state department. He was eventually adjudged to owe the government more than $49,000, which he paid. [1] 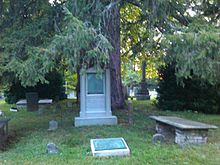 After leaving the federal cabinet, Randolph returned to Virginia to practice law, where he was a leader of the state bar. [1] His most famous case was defending Aaron Burr at his trial for treason in 1807.

Randolph lived his final years as a guest of his friend Nathaniel Burwell at Carter Hall, near Millwood, Virginia, in Clarke County. He suffered from paralysis in his final years and died at 60 on September 12, 1813. He is buried nearby at the Burwell family cemetery adjacent to " Old Chapel."

Randolph County, West Virginia was formed in 1787 and named in Randolph's honor. [12] Randolph County, Illinois was also named after him Randolph, who was the governor of Virginia when the state ceded what was then sometimes called Illinois County, Virginia (a title disputed by Pennsylvania and others) to the new federal government, which created the Northwest Territory. Randolph County's motto is "where Illinois began" because it was one of the first two settled counties in the territory. It contains Kaskaskia, the first seat of Illinois County, which later became the capital of Illinois Territory's capital and ultimately the state's first capital.

The Edmund J. Randolph Award is the highest award given by the US Department of Justice to persons who make "outstanding contributions to the accomplishments of the Department's mission." [13]