Albertis Sydney Harrison Jr. (January 11, 1907 – January 23, 1995) was an American politician and jurist. A member of the Democratic Party associated with Virginia's Byrd Organization, he was the 59th Governor of Virginia in 1962–66, and the first governor of Virginia to have been born in the 20th century. [2]

Harrison was born in Alberta, Virginia, the son of Albertis Sydney Harrison and Lizzie, (née Goodrich). [3] According to his national obituaries, he was related to Benjamin Harrison V who signed the Declaration of Independence and two United States presidents, William Henry Harrison and Benjamin Harrison, the 9th and 23rd Presidents. [2] [4] However, this has been proven false.[ citation needed] He researched and found this statement false himself.[ citation needed]

He was born in Alberta, Va, in Brunswick County. His home sat on a tract deeded to his ancestor, Henry Harrison, by King George II in 1732.

He received an LL.B degree from the University of Virginia Law School in 1928. [1]

Harrison went into legal practice in Lawrenceville, Virginia, where he became town attorney, before being elected commonwealth's attorney of Brunswick County. [1]

Harrison resigned as Attorney General in April 1961 to run for Governor, winning election that November with 63.84% of the vote, defeating Republican H. Clyde Pearson. His administration increased educational financing for new schools and laboratories and raised teachers' pay. He promoted the development of state-supported colleges and technical schools as well as improved vocational training. He helped to modernize state banking laws to attract investment and accelerated highway construction. [2] 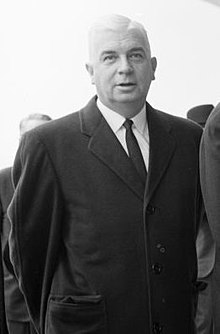 As Attorney General, Harrison was responsible for defending the state's resistance to school integration, as part of the Massive Resistance strategy endorsed and led by the state's political leader, United States Senator Harry F. Byrd.

Part of Massive Resistance involved the closing of public schools in various Virginia cities and counties to prevent racially integrated classrooms. Davis v. County School Board of Prince Edward County (1952) was one of the companion cases to Brown v. Board of Education (1954), but the Supreme Court had left enforcement to the local federal district judge. Moreover, the Gray Commission of Byrd loyalists had recommended passage of various laws to avoid or delay integration. After opinions by the Virginia Supreme Court on January 19, 1959 (the birthday of Robert E. Lee) as well as a three-judge federal panel overturned much of the new Virginia legislation, Governor James Lindsay Almond Jr. (previously attorney general) and Harrison decided not to defy those courts and allowed schools in Arlington and Norfolk to reopen. However the schools in Prince Edward County closed in 1958 and did not reopen until 1963, as white students used tuition grants to attend a private segregation academy at state expense, while black students were left to volunteer efforts. Other problematic school closures, ultimately opened pursuant to federal court orders included those in Albemarle, Warren County and later New Kent County (the subject of the 1968 Supreme Court decision in Green v. County School Board of New Kent County (1968). Harrison told the board to comply unless they were willing to risk prosecution. By this time, he, like a number of other Byrd Democrats, had concluded that obstinate resistance to integration could not continue. [2]

Another aspect of Massive Resistance involved new laws regulating attorney ethics, designed to attack practices of the NAACP, which was pursuing the desegregation actions. Initially, the U.S. Supreme Court deferred to an upcoming decision of the Virginia Supreme Court about those new ethics rules in Harrison v. NAACP (1959), but the case came before it twice more in NAACP v. Button (1963) (which was reargued after Harrison resigned as Attorney General to run for Governor, and which Virginia lost under attorney general Robert Young Button.

The courthouse in Lawrenceville is named in his honor.