Incline Village is a census-designated place (CDP) on the north shore of Lake Tahoe in Washoe County, Nevada, United States. The population was 8,777 at the 2010 census. [1] It is part of the Reno− Sparks Metropolitan Statistical Area. Until the 2010 census, the CDP Crystal Bay, Nevada was counted jointly with Incline Village.

Sierra Nevada University's main campus is located in Incline Village. It has some of the most expensive real estate in the United States. [2] 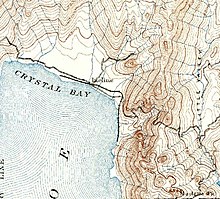 The Sierra Nevada Wood and Lumber Company (SNW&L) was a logging company that operated on the northeast side of Lake Tahoe at what is today known as Incline Village, which was named after the SNW&L incline railway that served the area. Timber was required for the mines during the mining boom in the late 1800s of the nearby Comstock Lode in Virginia City. The timber around Lake Tahoe was placed on the incline railway where it was taken up 1,400 feet (430 m) and then dropped by a gravity flume down the western side of mountain to a 3000 ft tunnel to Carson City. The company operated a number of other railroad lines that were 3 ft (914 mm) narrow gauge and standard gauge. [4]

Several creeks cross Incline Village on the way to Crystal Bay, Lake Tahoe. Heading east from Stateline Point, these include First, Second and Third Creeks, then Incline Creek and finally Mill Creek at the eastern end. [6]

Prior to 2010, the CDP was listed as "Incline Village–Crystal Bay, Nevada" by the U.S. Census Bureau. Crystal Bay, with a population of 305, became its own CDP for the 2010 census.

The local newspaper is the Tahoe Daily Tribune which is only published on Fridays. [10]

Incline Village has a humid continental climate ( Dfb) with warm to hot summers with cool nights and moderately cold winters with frigid nights.

The area is served by the Washoe County School District. Public schools in the CDP are Incline Elementary, Middle, and High School (public, K–12). The Lake Tahoe School is a private school for grades K–8.

Incline Village has a public library, a branch of the Washoe County Library. [11]

The town is known as a haven for business and wealthy individuals from California and Southern Nevada. While some move to the village, others register shell corporations and residences there to avoid paying California taxes. [12] [13] A Montara, California politician faced controversy for reporting Incline as her primary residence for tax purposes while also running for office in California. [14] Joe Francis, creator of "Girls Gone Wild", was registered as a resident in Incline but living in Los Angeles, California during the time he was found guilty of tax fraud and bribery. [15] Michael DeDomenico, heir of the Rice-A-Roni and Ghirardelli fortune, was charged with evading $1.5 million in taxes to California by falsely claiming residency in Nevada. He owned homes in Verdi and Incline. [16]