Arab Americans ( Arabic: عَرَبٌ أَمْرِيكِا‎ or أمريكيون عرب) are American citizens of Arab heritage. Arab Americans trace ancestry to any of the various waves of immigrants of the countries comprising the Arab World.

A number of native non-Arab ethnic groups to Middle East region that may have lived in Arab countries and are now resident in the United States are not classified as Arabs, including Assyrians, Arameans, Jews, Copts, Kurds, Iraqi Turkmens, Azerbaijanis, Mandeans, Circassians, Shabaki, Armenians, Yazidis, Balochs, and Kawliya/ Romani, Persians, Syrian Turkmens.

See also: Arab immigration to the United States and List of Arabic neighborhoods 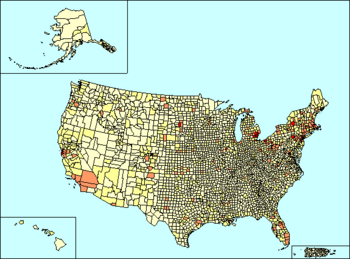 The majority of Arab Americans, around 62%, originate from the region of the Levant, which includes Syria, Lebanon, Palestine and Jordan, although overwhelmingly from Lebanon. The remainder are made up of those from Egypt, Morocco, Algeria, Iraq, Libya, the GCC and other Arab nations.

There are nearly 3.5 million Arab Americans in the United States according to The Arab American Institute. Arab-Americans live in all 50 states and in Washington, D.C., and 94% reside in the metropolitan areas of major cities. According to the 2010 U.S. Census, the city with the largest percentage of Arab Americans is Dearborn, Michigan, a southwestern suburb of Detroit, at nearly 40%. The Detroit metropolitan area is home to the largest concentration of Arab Americans (403,445), followed by the New York City Combined Statistical Area (371,233), Los Angeles (308,295), San Francisco Bay Area (250,000), Chicago (176,208), and the Washington D.C area. (168,208). [6](Note: This information is reportedly based upon survey findings but is contradicted by information posted on the Arab American Institute website itself, which states that California as a whole only has 272,485, and Michigan as a whole only 191,607. The 2010 American Community Survey information, from the American Factfinder website, gives a figure of about 168,000 for Michigan.)

Sorting by American states, according to the 2000 U.S. Census, 48% of the Arab-American population, 576,000, reside in California, Michigan, New York, Florida, and New Jersey, respectively; these 5 states collectively have 31% of the net U.S. population. Five other states - Illinois, Texas, Ohio, Massachusetts, and Pennsylvania - report Arab-American populations of more than 40,000 each. Also, the counties which contained the greatest proportions of Arab-Americans were in California, Michigan, New York, Florida, New Jersey, Ohio, Pennsylvania, and Virginia.

Arab population by state in the United States in 2010. 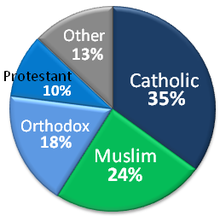 The religious affiliations of Arab Americans

According to the Arab American Institute, the breakdown of religious affiliation among persons originating from Arab countries is as follows:

The percentage of Arab Americans who are Muslim has increased in recent years because most new Arab immigrants tend to be Muslim. In the past 10 years, most Arab immigrants were Muslim as composed to 15 to 30 years were they were mostly Christian This stands in contrast to the first wave of Arab immigration to the United States between the late 19th and early 20th centuries when almost all immigrants were Christians. Most Maronites tend to be of Lebanese or Syrian; those Palestinians often Eastern Orthodox, otherwise Roman Catholic and a few Episcopalians. A small number are Protestant adherents, either having joined a Protestant denomination after immigrating to the U.S. or being from a family that converted to Protestantism while still living in the Middle East (European and American Protestant missionaries were fairly commonplace in the Levant in the late 19th and early 20th centuries).

Arab Christians, especially from Lebanon, Iraq, Syria, and Egypt, continue to immigrate into the U.S. in the 2000s and continue to form new enclaves and communities across the country. [65] 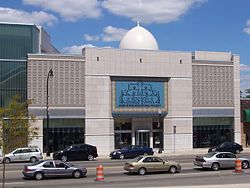 Paterson, New Jersey has been nicknamed Little Ramallah and contains a neighborhood with the same name, with an Arab American population estimated as high as 20,000 in 2015. [66]

In 2012, prompted in part by post-9/11 discrimination, the American-Arab Anti-Discrimination Committee petitioned the Department of Commerce's Minority Business Development Agency to designate the MENA populations as a minority/disadvantaged community. [67] Following consultations with MENA organizations, the Census Bureau announced in 2014 that it would establish a new MENA ethnic category for populations from the Middle East, North Africa and the Arab world, separate from the White classification that these populations had previously sought in 1909. The expert groups, including some Jewish organizations, felt that the earlier White designation no longer accurately represents MENA identity, so they lobbied for a distinct categorization. [68] [69] However, this was later rejected by the government and in the 2020 census they continued to be labeled under White.

The Arab American Institute and other groups have noted that there was a rise in hate crimes targeting the Arab American community as well as people perceived as Arab/Muslim after the September 11 attacks and the US-led 2003 invasion of Iraq. [71]

A new Zogby Poll International found that there are 3.5 million Americans who were identified as "Arab-Americans", or Americans of ancestry belonging to one of the 23 UN member countries of the Arab World (these are not necessarily therefore Arabs). Poll finds that, overall, a majority of those identifying as Arab Americans are Lebanese Americans (largely as a result of being the most numerous group). The Paterson, New Jersey-based Arab American Civic Association runs an Arabic language program in the Paterson school district. [72] Paterson, New Jersey has been nicknamed Little Ramallah and contains a neighborhood with the same name, with an Arab American population estimated as high as 20,000 in 2015. [66] Neighboring Clifton, New Jersey is following in Paterson's footsteps, with rapidly growing Arab, Muslim, and Palestinian American populations. [73]

In a 2007 Zogby poll, 62% of Arab Americans vote Democratic, while only 25% vote Republican. [74] The percentage of Arabs voting Democratic increased sharply during the Iraq War. However, a number of prominent Arab American politicians are Republicans, including former Oregon Governor Victor Atiyeh, former New Hampshire Senator John E. Sununu, and California Congressman Darrell Issa, who was the driving force behind the state's 2003 recall election that removed Democratic Governor Gray Davis from office. The first woman Supreme Court Chief Justice in Florida, Rosemary Barkett, who is of Syrian descent, is known for her dedication to progressive values.

According to a 2000 Zogby poll, 52% of Arab Americans are anti-abortion, 74% support the death penalty, 76% are in favor of stricter gun control, and 86% want to see an independent Palestinian state. [75]

In a study, Arab Americans living in Detroit were found to have values more similar to that of the Arab world than those of the general population living in Detroit, on average, being more closely aligned to the strong traditional values and survival values. This was less the case when participants were secular or belonged to second and subsequent generations. [76]

There are many U.S. immigrants from the Arab world who are not classified as Arabs. Among these are Armenian Americans, Kurdish Americans and Jewish Americans of Mizrahi origin. Some of these groups, such as Assyrians, are Semites, while the vast majority of the rest are not Semites. It is very difficult to estimate the size of these communities. For example, some Armenians immigrated to the U.S. from Lebanon, Syria, or Iraq. Estimates place these communities at least in the tens of thousands. [77] [78] [79] Other smaller communities include Assyrians, Berbers, Turkmen people, Mandeans, Circassians, Shabaki, Mhallami, Georgians, Yazidis, Balochs, Iranians, Azerbaijanis and Kawliya/ Roma.

Most of these ethnic groups speak their own native languages (usually another Semitic language related to Arabic) and have their own customs, along with the Arabic dialect from the Arab country they originate from. Aviva Uri, in her study of Mizrahi Jews in America, writes that "activists and writers in the United States, both gentile Arab and Jewish, are legitimizing through their various activities and publications the identity of Mizrahim as Arab Jews." [80]

While the spectrum of Arab heritage includes 22 countries, their combined heritage is often celebrated in cultural festivals around the United States.

The Annual Arab-American & North African Street Festival was founded in 2002 by the Network of Arab-American Professionals of NY (NAAP-NY). [82] Located in downtown Manhattan, on Great Jones Street between Lafayette & Broadway, the Festival attracts an estimated 15,000 people, in addition to over 30 Arab and North African vendors along with an all-day live cultural performance program representing performers from across the Arab world.

The New York Arab-American Comedy Festival was founded in 2003 by comedian Dean Obeidallah and comedian Maysoon Zayid. Held annually each fall, the festival showcases the talents of Arab-American actors, comics, playwrights and filmmakers, and challenges as well as inspires fellow Arab-Americans to create outstanding works of comedy. Participants include actors, directors, writers and comedians. [83]

Of particular note is ArabFest in Seattle, begun in 1999. The festival includes all 22 of the Arab countries, with a souk marketplace, traditional and modern music, an authentic Arab coffeehouse, an Arabic spelling bee, and a fashion show. Lectures and workshops explore the rich culture and history of the Arab peoples, one of the world's oldest civilizations. Also of new interest is the Arabic rap concert, including the NW group Sons of Hagar, showcasing the political and creative struggle of Arabic youth. [84] 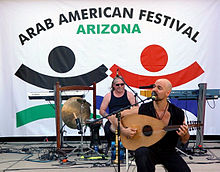 In 2008, the first annual Arab American Festival in Arizona was held on 1 and 2 November in Glendale, Arizona. There were more than 40,000 attendees over the two-day event; more than 35 international singers, dancers, and musicians from all over the Arab World performed 20 hours of live entertainment on stage. Activities included folklore shows, an international food court, hookah lounge, kids rides and booth vendors, open to the public, and admission was free. [85]

The Annual Arab American Day Festival is a three-day cultural and entertainment event held in Orange County. Activities include book and folk art exhibitions, speeches from community leaders in the county, as well as music and poetry, dancing singing, traditional food, hookah and much more. [86]

Since 1996, Milwaukee's Arab World Fest has been part of the summer festival season. It is held on the second weekend of August. This three-day event hosts music, culture, and food celebrating the 22 Arab countries. The festival features live entertainment, belly dancing, hookah rental, camel rides, cooking demonstrations, a children's area and great Arab cuisine. It is a family-friendly festival on Milwaukee's lakefront. [87]

Here are a few examples of famous Arab Americans and Americans with partial Arab ancestry in a variety of fields.