From Wikipedia, the free encyclopedia
For other uses, see Miwok (disambiguation).

The Miwok (also spelled Miwuk, Mi-Wuk, or Me-Wuk) are members of four linguistically related Native American groups indigenous to what is now Northern California, who traditionally spoke one of the Miwok languages in the Utian family. The word Miwok means people in the Miwok language.

Anthropologists commonly divide the Miwok into four geographically and culturally diverse ethnic subgroups. These distinctions were not used among the Miwok before European contact. [2]

The United States Bureau of Indian Affairs officially recognizes eleven tribes of Miwok descent in California. They are as follows:

Further information: List of unrecognized tribes in the United States 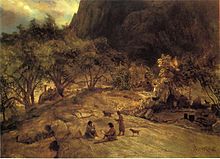 The predominant theory regarding the settlement of the Americas date the original migrations from Asia to around 20,000 years ago across the Bering Strait land bridge, but one anthropologist claims that the Miwok and some other northern California tribes descend from Siberians who arrived in California by sea around 3,000 years ago. [13] 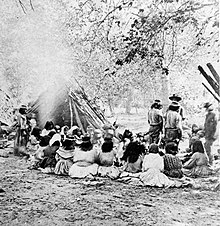 The Miwok lived in small bands without centralized political authority before contact with European Americans in 1769. They had domesticated dogs and cultivated tobacco, but were otherwise hunter-gatherers.

The Sierra Miwok harvested acorns from the California Black Oak. In fact, the modern-day extent of the California Black Oak forests in some areas of Yosemite National Park is partially due to cultivation by Miwok tribes. They burned understory vegetation to reduce the fraction of Ponderosa Pine. [14] Nearly every other kind of edible vegetable matter was used as a food source, including bulbs, seeds, and fungi. Animals were hunted with arrows, clubs or snares, depending on the species and the situation. Grasshoppers were a highly prized food source, as were mussels for those groups adjacent to the Stanislaus River. Coastal Miwok were known to have predominantly relied on food gathered from the inland side of the Marin peninsula (modern San Pablo bay, lakes, and land based foods), but to have also engaged in diving for abalone in the Pacific Ocean.

The Miwok ate meals according to appetite rather than at regular times. They stored food for later consumption, primarily in flat-bottomed baskets.

Miwok mythology and narratives tend to be similar to those of other natives of Northern California. Miwok had totem animals, identified with one of two moieties, which were in turn associated respectively with land and water. These totem animals were not thought of as literal ancestors of humans, but rather as predecessors. [15]

Miwok people played gender mixed games[ clarification needed] on a 110-yard playing field called poscoi a we’a. A unique game was played with young men and women. Similarly to soccer, the object was to put an elk hide ball through the goalpost. The girls were allowed to do anything, including kicking the ball and picking it up and running with it. The boys were only allowed to use their feet, but if a girl was holding it he could pick her up and carry her towards his goal. [16]

The Star Wars films feature a fictional species of forest-dwelling creatures known as Ewoks, who are ostensibly named after the Miwok. [19] However, the historical Northern-California footprint of the Miwok people (where George Lucas's home and corporate headquarters were located) may have caused the Ewoks' name to be retconned to enhance the marketability of the 1983 film.[ citation needed]

The Miwok people are encountered in Kim Stanley Robinson's book, The Years of Rice and Salt. In an alternate history scenario depicted in the book they are the first group of Native Americans encountered by the first Chinese to discover the continent.