Paterson, New Jersey, within the New York City Metropolitan Area, is becoming an increasingly popular destination for Chilean immigrants to the United States since the 2010 Chile earthquake.

The Chilean population from the U.S. census was 126,810. In the United States, Chileans are the fourth smallest Hispanic group from South America and the fifth smallest overall amongst all Hispanic groups. Chilean Americans live mainly in the New York Metropolitan Area, South Florida, Los Angeles County, San Francisco Bay Area (esp. San Mateo County) and the Baltimore-Washington Metropolitan Area, with high population concentrations found in Queens in New York City; Northern New Jersey; Miami, Florida; and Nassau County, New York. Most Chileans migrating to the United States settle in metropolitan areas. After the 1960s, Chileans began to immigrate more for economic or academic rather than political reasons and that continues into the modern day.

Chileans and other South Americans have been present in the state of California since the 1850s gold rush. Not all Chileans made it to the gold fields. Some remained in San Francisco, San Jose, Sacramento, and Stockton where they frequently worked as bricklayers, bakers, or seamen. Some with capital established themselves in various businesses, particularly the importation of flour and mining equipment from Chile. In the cities most tended to congregate and live in specific areas in the poorer sections of town. In the gold fields they lived in separate camp sites. In the summer of 1849 Chileans constituted the majority of the population of Sonora. Chileans frequently worked their mines as group efforts. When the placer gold ran out around Sonora the Chileans were amongst the first miners in California to extract gold from quartz. [2] Historical remnants of those settlements influenced the names of locations such as Chileno Valley in Marin County, Chili Gulch in Calaveras and Chili Bar in Placer which was named after Chilean road builders. Names of Chilean towns and places are often found in the names of streets in Northern California: Valparaiso, Santiago, and Calera. [3] [4]

After Allende was overthrown and a military regime was established in 1973, a large exodus of Chileans took place. Most fled to European countries, but a small group did emigrate to the US. The US government took these Chileans as refugees under a program for "political parolees."

Many of San Francisco's streets carry names of former residents of Chile: Atherton, Ellis, Lick, Larkin, and others. Chilean women also left their names: Mina and Clementina. Manuel Briseño, an early journalist in the mines was one of the founders of the San Diego Union. Juan Evangelista Reyes was a Sacramento pioneer as were the Luco brothers. Luis Felipe Ramírez was one of the City Fathers in Marysville. The Leiva family owned at one time, much of the land in Marin County, including Fort Ross. In 1975, Chilean exiles of the Augusto Pinochet dictatorship established La Peña Cultural Center in Berkeley, California, which is to this day the largest Chilean cultural center in the United States.

Chilean Americans have achieved many skills as entrepreneurs, judges, congressmen, and others.

Most Chilean immigration to the U.S. has occurred largely since the 1990s. [5] For the most part, Chileans left as either political asylees and refugees during the dictatorship of Augusto Pinochet, or for economic reasons. The involvement of the United States in Salvador Allende's overthrow in 1973 led to political exiles fleeing from Chile to the U.S., as well as other countries. [6]

Also, there have been others that have emigrated to seek higher education and career development opportunities. Since the 1960 Valdivia earthquake and with 2010 Chile earthquake, many Chileans have pursued economic opportunities in the United States, with Paterson, New Jersey, representing an increasingly common destination.

Many of the Pinochet-era immigrants were of middle or upper class origin. A significant proportion of them arrived with advanced educations and well-developed skills. They had contacts with other Chilean exiles and a sense of identity from their shared commitment to a democratic Chile. After a period of adjustment, many of them were able to pursue skilled jobs or professions. Unfortunately, others, who lacked skills or whose professional certifications were not recognized in the United States, were forced to take low-level jobs in which they were unable to use their skills. Some had been politically active students or union leaders in Chile who did not enter the United States with easily transferable skills. [5]

Most Chileans are castizos, meaning their ancestry is one quarter indigenous and three quarters Spanish and/or other Caucasian heritage. They rather identify themselves as both Hispanic and white. [7] Some Chilean-owned stores and restaurants advertise as French and Italian. [7] Many often prefer living in white suburban neighborhoods in the U.S., and have a strong sense of family. [7]

The 10 US states with the largest population of Chilean Americans are:

The largest populations of Chilean Americans are situated in the following urban areas:

US communities with the highest percentages of Chileans as a percent of total population: (Source: Census 2010)

Chileans are more than 1% of the entire population in only fifteen communities in the US. These communities are mostly located in Miami-Dade County, Morris County, NJ, and Nassau County, NY.

Most Chileans have customs that blend well into the American lifestyle. The Chilean workday is similar to the American workday, with the regular businessman or woman working 45 hours a week [8] from 8:30 am to 6:30 pm with a lunch break, as well as possibly staying behind at work for a few hours to work overtime. However, many Chileans outside Santiago are used to going home for lunch, something not as common in the US and with Chilean Americans.

Unlike the "normal" American diet, Chileans are used to having four meals a day. Breakfast, lunch, tea (or onces) at about five o'clock, and a late dinner. Most people actually have onces at around 8 pm and skip dinner. Surprisingly, Chile is one of the only Latin countries where tea is a more popular drink than coffee, differing from American consumption trends as well 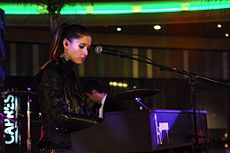