An Act for the Admission of the State of California

From Wikipedia, the free encyclopedia
Federal admission act to join California to the United States

An Act for the Admission of the State of California into the Union is the federal legislation that admitted California to the United States of America as the thirty-first state. California is one of only a few states which became a state without first being an organized territory.

An Act for the Admission of the State of California into the Union is the formal title given to the Congressional legislation passed by the 31st Congress, and signed by President Millard Fillmore on September 9, 1850, which admitted California as the 31st state to the Union. [1] [2] Per the terms of the Compromise of 1850, California was admitted as a free state. The Act may informally be referred to as the California Statehood Act or the California Admission Act.

Start of the Mexican American War and the Bear Flag Revolt 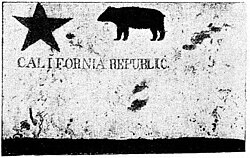 The United States declared war on Mexico on May 13, 1846. After receiving word of the declaration of war, a force consisting mostly of American settlers in California, staged a revolt on June 15, 1846 against Mexican authorities which became known at the Bear Flag Revolt. They overwhelmed and captured the small Mexican garrison at Sonoma and declared the California Republic (Spanish: La República de California), or Bear Flag Republic, raising the original Bear State flag over the captured garrison. [a] Their control was largely restricted to the area around Sonoma California and lasted for 25 days. On July 5, 1846, Brevet Captain John C. Frémont assumed control of the republic's forces and integrated into his California Battalion. [3] On July 9, 1846, Navy Lieutenant Joseph Warren Revere arrived in Sonoma and replaced the Bear Flag with the flag of the United States, formally declaring the United States possession of California. [4] [5] [6]

End of the Mexican American War

The Mexican–American War ended with the signing of the Treaty of Guadalupe Hidalgo in 1848. In the treaty, Mexico ceded a large portion of northern Mexico in what is now the southwestern United States. [7] With the acquisition of this large territory, Congress began debating how to organize it. Initially, there was no cause to rush the organization, as the territory was sparsely populated. However, with the discovery of gold at Sutter's Mill in California, a large migration of Americans began, as well as an influx of new immigrants from Europe and Asia, seeking to either find gold or provide goods and services to those seeking gold. This migration gave rise to the immediate necessity of organizing the territory to provide services such as recording land deeds and claims, providing court services and law enforcement, and organizing local governments. [8] [9]

The issue of the expansion or restriction of slavery was a fundamental dispute in the admission of new states to the Union since before the passage of the Missouri Compromise in 1820. The size of the California territory, its natural resources, access to the Pacific as well as the speed at which the territory was expanding its population added a special urgency to organizing and admitting California into the Union. Some feared that if the United States did not act swiftly an independence movement could erupt that might sever California from the United States. A fierce debate raged over the status of California and the other territories ceded to the U.S. by Mexico for most of the 31st Congress. General Zachary Taylor, a hero of, but also a staunch opponent of the Mexican War, had become President in 1848. Although Taylor was a southern slaveowner, he believed that slavery was economically unfeasible in the acquired territories and therefore opposed the expansion of slavery as pointless and controversial, which became a serious obstacle impeding agreement in Congress on a solution to the territorial issue. [10] [11] In Taylor's 1849 State of the Union message to Congress, he commented extensively on the issue of California, stating in part,

The extension of the coast of the United States on the Pacific and the unexampled rapidity with which the inhabitants of California especially are increasing in numbers have imparted new consequence to our relations with the other countries whose territories border upon that ocean. It is probable that the intercourse between those countries and our possessions in that quarter, particularly with the Republic of Chili, will become extensive and mutually advantageous in proportion as California and Oregon shall increase in population and wealth.

No civil government having been provided by Congress for California, the people of that Territory, impelled by the necessities of their political condition, recently met in convention for the purpose of forming a constitution and State government, which the latest advices give me reason to suppose has been accomplished; and it is believed they will shortly apply for the admission of California into the Union as a sovereign State. Should such be the case, and should their constitution be conformable to the requisitions of the Constitution of the United States, I recommend their application to the favorable consideration of Congress. [12]

The California Constitution, which had been adopted on November 13, 1849, [13] and proposition to admit California as a new state was submitted to Congress for debate President Zachary Taylor on February 13, 1850. [14]

With the unexpected death of Taylor on July 9, 1850, Vice President Millard Fillmore became President. Although Fillmore was a northerner and not a slave holder, he had strong ties to the South and was much more open to a compromise that would allow the extension of slavery into the territories. This change of leadership opened the door for the passage of the Compromise of 1850, crafted by Henry Clay. The compromise allowed the admission of California into the Union without Congress imposing any limitation on the introduction of slavery. However, the Constitution adopted by the California Constitutional Convention in October 1849 in preparation for admission into the Union specifically prohibited slavery in the new state. This compromise was offset by concessions to slave states, including the possible extension of slavery into other territories ceded from Mexico and the passage of the Fugitive Slave Act of 1850 which stripped the free states of much of their ability to legally protect blacks who were suspected of fleeing slavery from kidnapping by slave catchers and forcible removal to the South. [15] [16] 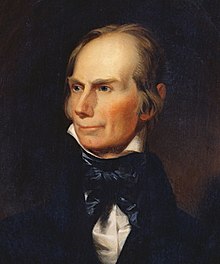 On January 29, 1850, Senator Henry Clay proposed eight resolutions to end the heated debate over the status of the territories acquired from Mexico. Congress adopted Clay's eight resolutions, collectively known as the Clay Resolutions which prepared the way for the passage of the five acts making up the Compromise of 1850. [17] The first resolution concerned the admission of California and reads as follows:

Resolved, That California, with suitable boundaries, ought, upon her application to be admitted as one of the States of this Union, without the imposition by Congress of any restriction in respect to the exclusion or introduction of slavery within those boundaries.

Text of the Admission Act

The California Admissions Act was the second act of the Compromise of 1850 to be passed by Congress.

The text of the act contains three sections and enacts five main provisions: [14]

The final provision in section three was intended as a declaration that Congress took no position on the provisions against slavery contained in the California constitution. [16]:151-248, 331-359, 392

The text of An Act For The Admission Of The State Of California Into The Union reads as follows:

Preamble Whereas the people of California have presented a constitution and asked admission into the Union, which constitution was submitted to Congress by the president of the United States, by message dated February thirteenth, eighteen hundred and fifty, and which, on due examination, is found to be republican in its form of government:

Section 3 And be it further enacted, that the said state of California is admitted into the Union upon the express condition that the people of said state, through their legislature or otherwise, shall never interfere with the primary disposal of the public lands within its limits, and shall pass no law and do no act whereby the title of the United States to, and right to dispose of, the same shall be impaired or questioned; and that they shall never lay any tax or assessment of any description whatsoever upon the public domain of the United States, and in no case shall nonresident proprietors, who are citizens of the United States, be taxed higher than residents; and that all the navigable waters within the said state shall be common highways, and forever free, as well to the inhabitants of said state as to the citizens of the United States, without any tax, impost, or duty therefore: provided, that nothing herein contained shall be construed as recognizing or rejecting the propositions tendered by the people of California as articles of compact in the ordinance adopted by the convention which formed the constitution of that state.

With the signing of the Compromise of 1850, California was formally admitted to the Union as the 31st state in the Union on September 9, 1850. The United States House of Representatives approved the bill on September 7, 1850 by a vote of 150 to 56. [18] The United States Senate under the careful leadership of Henry Clay and Daniel Webster had previously voted on January 17, 1850 to admit California into the Union by a vote of 48 to 3 and they concurred with the House vote on September 7, 1850. [19]

The territory legislature first met as what would become the legislature of the State of California after admission on December 15, 1849 at the first state capital at San Jose, California. The first American governor of California was Peter Hardeman Burnett, who was elected as the first civilian governor prior to statehood on December 20, 1849 and continued in the position until January 9, 1851. [20] [6]:1321-1460 The first two members from California to the United States Senate were San Franciscans John C. Fremont and William M. Gwin, both of whom were members of the Democratic Party and took their oaths of office on September 10, 1850. [13] On September 11, 1850, Edward Gilbert (Democrat) and George W. Wright (Independent) took their oaths of office to become the state’s two Representatives. [18]

California Admission Day is a legal holiday in the state of California in the United States. It is celebrated as a day of observance annually on September 9 to commemorate the anniversary of the 1850 admission of California into the Union as the thirty-first state. [21]