From Wikipedia, the free encyclopedia
Place in Nevada, United States 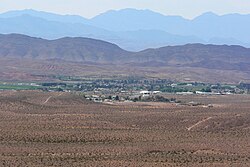 The new Saint Joseph like the other Mormon settlements in the Moapa Valley was abandoned in 1871 due to a tax dispute with the state of Nevada. Its post office closed in October 1871 but became active again on in May 1876. Following the Mormon return to Overton in 1880, in November 1883 the post office operations were moved there. [2]:208

The town began to revive in 1912 around a railroad station with the name Logan, which some believe was named for a Civil War veteran who settled on the abandoned town site, although this has never been documented. It was subsequently renamed Logandale because the mail kept winding up in Logan, Utah. [3]

Logandale is located at the north end of Moapa Valley. The town can be accessed by taking exit 93 off of Interstate Highway 15, going south on Highway 169.

The Clark County Fair and Rodeo is held annually in Logandale.