The College of Mount Saint Vincent (CMSV) is a private Catholic college in New York City. It was founded in 1847 by the Sisters of Charity of New York.

The college serves over 1,800 students with professional undergraduate programs in nursing, business, communication, and education and graduate degree programs in nursing, business, TESOL and education. It is under the care of the Sisters of Charity of New York, one of several Sisters of Charity congregations of Catholic women that trace their lineage back to Saint Elizabeth Ann Seton. 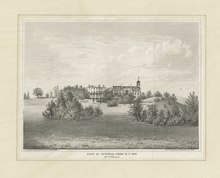 The college was founded in 1847 as the Academy of Mount Saint Vincent, a school for women. It took its name from Saint Vincent de Paul, the 17th-century French priest who worked with the poor and founded the original Sisters of Charity, and from the geographic high point along Fifth Avenue in Manhattan known as McGowan's Pass. On April 25, 1865, the funeral train carrying Abraham Lincoln back to Springfield, Illinois passed by the college. [3]

In 1911, the academy became a degree-granting institution, and changed its name to the College of Mount Saint Vincent.

See also: Fonthill Castle and the Administration Building of the College of Mount St. Vincent

The castle housed the college library from 1942 to 1968. Fonthill once formed the architectural symbol of the college and housed the Office of Admissions and Financial Aid. It was listed on the National Register of Historic Places in 1980. [4] Today, Fonthill is vacated due to damage it has suffered throughout the years.

One of the original buildings on site, the Villa (or gardener's cottage) was built of ashlar, sometime prior to 1856 in mid-19th century " bracketed" style. [5] From 1887 to 1911 the "Stone Cottage" (originally called "Lourdes Villa") housed the St. Aloysius Academy for Boys. Many of the boys attending had sisters who were students at Mt. St. Vincent Academy. [6] Today the Villa, is the home for several members of Sisters of Charity of New York.

Founders Hall was built between 1857 and 1859 and subsequently expanded in 1865, 1883, 1906–1908, and in 1951. The original building is a five-story red brick building on a fieldstone base. It features a six-story square tower topped by a copper lantern and spire. The tower is flanked by five story gabled sections. [7]

The Administration Building was listed on National Registrar of Historic Places in 1980.

Today, The Administration Building has been renamed to "Founders Hall" in honor of all those who founded the college.

A fire started in half of Founders Hall in the summer of 2014 and the damage was restored later during the school year.

Maryvale was constructed in 1859; it originally served as a laundry. In 1906 the laundry moved to the newly constructed Rosary Hall and Maryvale housed science classes. In 1954, Science classes moved to the new science building and Maryvale became the Library Annex and Studio Annex. Today, it mainly houses the communications and fine arts departments. Maryvale features a radio studio and a TV studio. The radio shows streams live on livestream. The TV studio is where students film the school's news program, Mount Saint Vincent News.

In 1873 the Lourdes Grotto was built. It is now considered the oldest outdoor grotto still in existence in the United States. The grotto is situated on a little island in a small lake in an area at one time known as "Lourdes Park". [3]

In 1911, with the opening of a parochial school in Riverdale, Le Gras was remodeled to house the college gymnasium with an auditorium on the second floor. [3] It also housed the commuter students' cafeteria. Today, Le Gras Hall is the headquarters for the Sisters of Charity of New York.

Today, several sisters from the Sisters of Charity of New York currently resided in Rosary Hall.

Opened in 2009, the Sharp Center offers 50,000 square feet of recreational space and houses the college's basketball courts, fitness center, and athletic offices. In 2016, the college placed solar panels on top of the roof of the Sharp Center.

In 2013, the college renovated the building making state of the art.

Opened in 2021, Aquino Hall serves as a residence hall and also houses the Mount's Nursing Program. [8]

CMSV is registered by the New York State Education Department, Office of Higher Education, in Albany, New York, and is independently chartered to grant degrees by the Regents of the State of New York.