From Wikipedia, the free encyclopedia
art school in New York 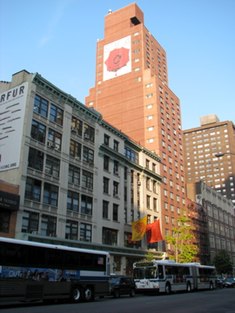 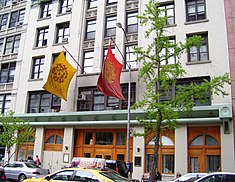 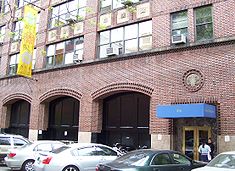 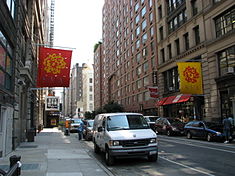 The School of Visual Arts New York City (SVA NYC) is a for-profit art and design college in Manhattan, New York. It was founded in 1947, and is a member of the Association of Independent Colleges of Art and Design. [2]

The school was started by Silas H. Rhodes and Burne Hogarth in 1947 as the Cartoonists and Illustrators School; [3] it had three teachers and 35 students, [4] most of whom were World War II veterans who had a large part of their tuition underwritten by the U.S. government's G.I. Bill. [5] It was renamed the School of Visual Arts in 1956 [3] and offered its first degrees in 1972. [6] In 1983, it introduced a Master of Fine Arts in painting, drawing and sculpture. [7]

The school has a faculty of more than 1000 [8] and a student body of over 3000. [1] [4] It offers 11 undergraduate and 22 graduate degree programs, and is accredited by the Commission on Higher Education of the Middle States Association of Colleges and Schools [4] [9] and the National Association of Schools of Art and Design. [10]

PayScale included the college in its "Top 10 Art & Design Schools by Salary Potential" list for 2013–2014. [19] It is ranked 18th among the art graduate schools in U.S. News & World Report, [20] with its MFA Photography, Video and Related Media program ranked the fifth best MFA photography program in the country. [21]

The school has several buildings in the Gramercy Park neighborhood, on Manhattan's east side, and in the Chelsea neighborhood, on the west side. There is a residence hall on Ludlow Street, in the Lower East Side. [22] From 1994 to 1997, it had a branch campus in Savannah, Georgia; this was closed following a lawsuit from the Savannah College of Art and Design. [23]

The building at 133 to 141 West 21st Street, between Sixth Avenue and Seventh Avenue in Chelsea, [27] [28] has studios for drawing and painting classes.

The Theatre is at 333 West 23rd Street, between Eighth Avenue and Ninth Avenue, in Chelsea. It was formerly the Clearview Chelsea West Cinema. It was purchased in 2008, renovated, and reopened in January 2009. Milton Glaser designed the theater's interior and exterior, including the sculpture situated atop its marquee. The 20,000-square-foot (1,900 m2) facility houses two separate auditoriums, one with 265 seats and one with 480, and hosts class meetings, lectures, screenings and other public events. It has also hosted the red-carpet New York première of Ethan Hawke's The Daybreakers and a diverse list of world premières, ranging from Lucy Liu's 2010 feature documentary Redlight, to the 2011 Fox animated comedy Allen Gregory; and the 2012 film The Hunger Games. Community partners that have used the theatre include the Tribeca and GenArt film festivals, Mayor Michael Bloomberg's PlaNYC environmental initiative, and the Mayor's Office of Film, Theatre & Broadcasting. [31] The theater is also home to the Dusty Film & Animation Festival, held annually since 1990, which showcases the work of emerging filmmakers and animators from the college's BFA Film and Video and BFA Animation programs. [32]

The school has three gallery spaces: the Chelsea Gallery, at 601 West 26th Street, 15th floor; the Flatiron Gallery, at 133/141 West 21st Street; and the Gramercy Gallery, at 209 East 23rd Street. The galleries show a mix of student and professional art; exhibitions are free and open to the public. [33]

There are several residence halls available for students at SVA.