Belhaven has extended its reach geographically and to adult and evening students at satellite campuses for graduate and undergraduate studies in Chattanooga, Dalton, Madison, Memphis, and online programs.

Belhaven University was founded in 1883 through the merger of the Mississippi Synodical College and The McComb Female Institute. In 1894, the college opened in its current location in Jackson, Mississippi on Peachtree Street in the historic Belhaven Neighborhood. [2] 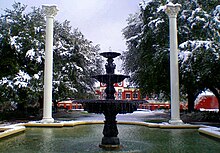 The school opened in the residence of Colonel Jones S. Hamilton, a Confederate veteran who became a millionaire after the war through investments in railroads run by convicts he leased. [3] The school took the name Belhaven in honor of Hamilton's mansion, which was named after his ancestral home in Scotland. [4]

In 1921, the Reverend Guy T. Gillespie of Lexington, Mississippi, began a 33-year presidency during which Belhaven was first accredited, an endowment fund begun, and scholarships made available. In 1939, Belhaven was merged with the Mississippi Synodical College, a college in Holly Springs, Mississippi which had been opened in 1883. [5] This date was adopted by the Board of Trustees as the official founding date of Belhaven as it represented the oldest founding date of all of the institutions which were eventually absorbed into the college.

A major fire devastated the college on August 9, 1927 when lightning struck the school's only building. The columns that stand in the middle of campus are the approximate site of the fire. Today, Fitzhugh and Preston Halls are the remnants of the main building destroyed in the fire.

In 1954, the Board of Trustees voted to allow the enrollment of male students, making Belhaven a fully co-educational institution. The school added men's basketball and men's tennis as intercollegiate sports in 1956. Dr. McFerran Crowe succeeded Gillespie as President and over the next six years he expanded and upgraded the faculty, while also reorganizing and modernizing business operations. [2] The first singing Christmas tree in the world debuted at Belhaven in 1933.

From 1960 to 1961, Dr. Robert F. Cooper served as acting president until the board selected Dr. Howard J. Cleland, then principal of nearby Murrah High School, to replace him. Under Cleland's 17-year tenure, an ambitious expansion program resulted in six major new buildings, while enrollment and the college budget tripled. In 1965, a faculty member was fired for being gay. [6] In 1972, the Synod of Mississippi officially transferred ownership of the college to the board of trustees, making Belhaven a fully independent college. In March, 1978, Doctor Verne R. Kennedy became the first Belhaven alumnus to serve as the chief executive of Belhaven College. In his eight years as president he reaffirmed the commitment to Christian service and the covenant relationship with the Presbyterian Church, and installed a more efficient administrative structure. In June 1986, another alumnus of Belhaven, Dr. Newton Wilson, became president. His nine-year term saw the greatest growth in the history of the college, from just over 600 students to more than 1,100. [2]

Dr. Verne R. Kennedy followed as President, and was the first Belhaven alumnus to serve as the school's chief officer. Kennedy reaffirmed the college's commitment to Christian service and its relationship with various Presbyterian denominations. Under Kennedy, Belhaven joined the Council for Christian Colleges and Universities.

By 1995, over 80 percent of Belhaven's faculty held doctoral or equivalent degrees. Dr. Daniel C. Fredericks served as acting president in 1995. In January 1996, Doctor Roger Parrott became the tenth president of the college, with about 1,300 enrolled students. Under his leadership, Belhaven has added seven major buildings, a variety of new undergraduate academic majors and graduate programs, intercollegiate football, campuses in Memphis, Orlando, Houston, Chattanooga, and Atlanta, online programs, the "Christian Worldview Curriculum", and earned national accreditation in all four of the major arts ( Music, Theater, Visual Arts, and Dance). The size of the student body has nearly quadrupled during his tenure. [2]

Belhaven has gone through various name changes over the years. Four major name changes have taken place, although the name "Belhaven" has been common to them all. The school was founded as "Belhaven College for Young Ladies" in 1894. After the original location burned in a fire in 1910, Belhaven was reopened as "The Belhaven Collegiate and Industrial Institute" in 1911 at its current location on Peachtree Street in the historic Belhaven Neighborhood in Jackson. In 1915, the Board of Trustees further changed the school's name to "Belhaven College".

In December, 2009, President Roger Parrott announced that the Board of Trustees had voted unanimously to change the name from "Belhaven College" to the current name of "Belhaven University", effective on January 1, 2010. Among the reasons cited for the name change were the addition of several new graduate programs of study and a total enrollment of more than 3,000 students across four locations, including over 500 graduate students. [2]

The Belhaven Blazers are the mascots for all teams and Belhaven's colors are Green and Gold.

In 2010, the Belhaven Softball team finished 3rd nationally in the NAIA National Tournament. In 2011, Belhaven Softball finished as the #3 ranked team in the nation. The Blazers have been in the World Series 7 of the past 10 years with NCAAA #2 finishes at the national tournament in 2016 and 2018. The Blazers have been coached by Kevin Griffin for the past 10 years. Griffin has amassed the most wins in Belhaven softball history.

The Men's Soccer team won the 2012 NAIA National Championship, compiling a record of 19-4-1. Men's soccer had also won the national title in 1992.