From Wikipedia, the free encyclopedia
(Redirected from U.S. Route 49 in Mississippi)
Highway in the United States

It was at the junction of US 49 and U.S. Route 61 that blues singer Robert Johnson is said to have sold his soul to the Devil. The highway is also the subject of songs by Big Joe Williams and Howlin' Wolf (Chester Arthur Burnett).

US 49 has historically been one of the most important highways in Mississippi. It was the state's first highway to see a significant rural segment four-laned. [2] Today, it is the only four-laned route directly connecting Jackson, the state's capital and largest city, to the Mississippi Gulf Coast. [3] Some urban segments along this portion of the route maintain three or more traffic lanes in each direction. US 49 serves as a primary hurricane evacuation route for Gulf Coast residents. [4] 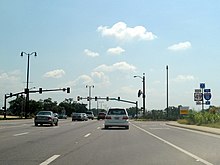 Southern terminus of US 49 at US 90 in Gulfport

US 49 begins near the Port of Gulfport, Mississippi at a junction with US 90. It provides a major connection between the port, casinos, beaches and downtown with I-10 (exits 34A-B), where it has its first major junction being a full service cloverleaf interchange on the city's north end. The crossing of these two roads is officially recognized by the state of Mississippi as the Castilgia Interchange. [5] North of I-10, US 49 passes through suburban areas and enters De Soto National Forest. Various state highway interchanges and junctions are encountered before the route passes near Camp Shelby, then through an interchange with US 98 just south of Hattiesburg. At this point, travelers have an option of continuing on US 49 through Hattiesburg or using the I-59/US 98 bypass which reconnects with US 49 in the northern part of the city. Continuing on US 49 brings one to a cloverleaf interchange at US 11, one of very few in the South to lack merging lanes between loop ramps, thus altering the usual weaving patterns which plague many of these interchanges.

US 49 passes Hattiesburg's primary medical facility, Forrest General Hospital, and the campus of the University of Southern Mississippi before arriving at another, more standard cloverleaf interchange with I-59. Those who used the aforementioned bypass, wishing to reconnect with US 49 North to the state capital, must use exit 67B. It is also at I-59, where Mississippi Highway 42 (MS 42) runs with US 49 for a short distance as suburban development is soon encountered as the road returns to rural environs. Eventually, MS 42 departs from the four-laned highway and branches off to the west toward smaller towns, starting with Sumrall. Interchanges between Hattiesburg and Jackson provide access to various state highways, and one at Collins provides access to US 84.

US 49W passing through the Mississippi Delta north of Yazoo City

At Jackson, US 49 upgrades to Interstate Highway standards before joining I-20 using a two-lane flyover. About a mile later, I-20/US 49 merges with I-55 at a stack interchange. I-20/I-55/US 49 crosses the Pearl River into Hinds County and bypasses Downtown Jackson, where I-55 departs to the south. US 49/I-20 continue west until US 49 ends its run with I-20 and joins I-220 before turning northwest to Yazoo City. A split in the highway, rare in the U.S. Highway System, begins here; both routes head into the Mississippi Delta, US 49W serving the towns of Belzoni and Indianola, where it junctions with US 82 and its four-lane segment ends, while two-laned US 49E serves Tchula before encountering US 82 at Greenwood. Both routes continue north from US 82 and are linked again at Tutwiler. Continuing northwest, the highway passes through an interchange with US 61 as it enters Clarksdale. It is at Clarksdale that US 49 encounters "The Crossroads", the legendary junction with State Street (an old alignment of US 61) where the great blues musician Robert Johnson is reputed to have sold his soul to the devil. [6]

From Clarksdale, US 49 continues north and crosses the Mississippi River using the Helena Bridge where it enters Arkansas near the town of Helena. 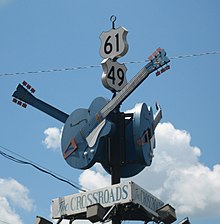 The legendary "Crossroads" at Clarksdale, the inspiration for the song " Cross Road Blues" 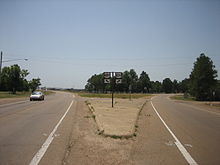 Split of US 49 in Tutwiler

In May 2005 portions of extant US 49E were renamed the "Emmett Till Memorial Highway". [7]

The Mississippi section of US 49 and the routes of US 49E and US 49W are defined at Mississippi Code Annotated § 65-3-3.

US 49 enters Arkansas near Helena-West Helena in Phillips County. US 49 Business runs around the north part of the city, with the main route meeting AR 242 in the southern portion. US 49 continues west to Walnut Corner where the route meets AR 1 (and briefly AR 316). The US 49/AR 1 concurrency ends in Marvell, and US 49 enters Monroe County.

Upon entering Monroe County, US 49 turns north to begin a concurrency with AR 39. US 49 also crosses US 79 before meeting US 70 near Brinkley. The route crosses Interstate 40 north of Brinkley prior to entering Woodruff County. US 49 runs northeast through rural Woodruff County, not crossing of concurring with any important routes before crossing into Cross County.

The route meets US 64 in Fair Oaks, and meets AR 42 in southern Hickory Ridge. It then enters Poinsett County, concurring with AR 214 from Fisher until Waldenburg. The route crosses AR 14 in Waldenburg.

Continuing northeast through rural Greene County, US 49/AR 1 meet AR 34 in Marmaduke and AR 90 in Rector. The route turns north to Piggott at Hargrave Corner, terminating at US 62/ AR 139. The Arkansas portion of US 49 is mainly two-lane undivided.

It is notable that for several years during the 1930s, a second split route existed on US 49 in South Mississippi, similar to but shorter than the split that still exists in the Delta region. [11] Between Brooklyn and Hattiesburg, travelers had the option of a 24-mile-long (39 km) direct route via US 49W, or a somewhat shorter but broken route on US 49E, serving the Forrest County Agricultural High School and the small community of McLaurin, Mississippi.