Temple Butte, in the Grand Canyon, Arizona, USA is a prominence below the East Rim. The butte lies on the west bank of the south-flowing Colorado River. The outfall from the Little Colorado River, draining from the Painted Desert to the east and southeast, is about 2-mi upstream.

Temple Butte is 5,308 feet (1,618 m) in elevation. It is the historical site of some wreckage of the 1956 Grand Canyon mid-air collision. It was first thought that smoke from Temple Butte, was due to a lightning strike fire, but later was found to be the result of the mid-air collision. 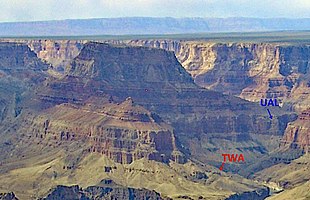 A closer view of Chuar and Temple Buttes.

The Tanner Trail from Desert View, Arizona down to the Colorado River, follows the west ridgeline of Tanner Canyon, and has numerous views looking due-north to Temple Butte. The trail ends at a viewpoint on the upper surfaces of a Redwall Limestone ridge. The Redwall Limestone is seen prominently below the East Rim, and is the cliff-forming shelf upon which the redbeds of the Supai Group accumulate.

The prominence of Temple Butte is composed of the Toroweap Formation, and below it, the tan or white, cross-bedded (fossil sand-dunes) of the Coconino Sandstone. The Coconino is a cliff-forming unit. The Hermit Formation and Supai Group "redbeds" below begin the base of the butte, as the slope-forming geological units.

An unimproved route, going north from Desert View, about 12 to 14 mi long ends at Cape Solitude; the point is adjacent the south canyon outfall of the Little Colorado River and canyon, with the Colorado River. Temple Butte is 2.5-mi west. [4]