From Wikipedia, the free encyclopedia
The highest court in the U.S. state of Hawaii 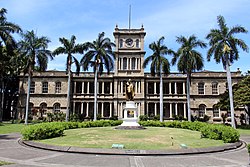 The court meets in Aliʻiōlani Hale in Honolulu.

The Hawaii State Supreme Court has original jurisdiction to answer questions of law that have been passed to it from trial courts or the federal court, hear civil cases submitted to the Supreme Court on agreed statements of facts, and decide questions coming from proceedings of writs of mandamus, prohibition, and habeas corpus. [1]

Main article: List of justices of the Supreme Court of Hawaii

The Supreme Court consists of five justices [2] [3] who are initially appointed to ten-year terms by the Governor of Hawaii, who makes his or her nomination from a list of four to six candidates from the Hawaii Judicial Selection Commission. [4] The Governor's nominee is subject to confirmation by the Hawaii State Senate. [5] Candidates must be U.S. citizens, Hawaii residents, and have been licensed to practice law for at least 10 years prior to nomination. [6] The Judicial Selection Commission can opt to retain incumbent justices for additional ten-year terms. [7] All justices must retire at 70 years of age. [8]