From Wikipedia, the free encyclopedia
Highest court in the U.S. state of New York

Further adding to misunderstanding is New York's terminology for jurists on its top two courts. Those who sit on its Supreme courts are referred to as "Justices" – the title reserved in most states and the Federal court system for members of the highest court – whereas the members of New York's highest court, the Court of Appeals, are titled "Judges".

The Court sits in Albany. Here it hears oral arguments in a 2009 case over the Atlantic Yards development in Brooklyn.

In a few cases, an appeal can be taken from the court of first instance to the Court of Appeals, bypassing the Appellate Division. Direct appeals are authorized from final trial-court decisions in civil cases where the only issue is the constitutionality of a federal or state statute. In criminal cases, a direct appeal to the Court of Appeals is mandatory where a death sentence is imposed, but this provision has been irrelevant since New York's death-penalty law was declared unconstitutional.

Administration of the courts

The 1842 courthouse of the New York Court of Appeals in Albany, Henry Rector, architect

The Court of Appeals was created by the New York State Constitution of 1846 to replace both the Court for the Correction of Errors and the Court of Chancery, and had eight members. Four judges were elected by general ballot at the State elections, the other four were chosen annually from among the Supreme Court justices. The first four judges elected at the special judicial state election in June 1847 were Freeborn G. Jewett (to a term of two and a half years), Greene C. Bronson (to a term of four and a half years), Charles H. Ruggles (to a term of six and a half years), and Addison Gardiner (to a term of eight and a half years). They took office on July 5, 1847. Afterwards, every two years, one judge was elected in odd-numbered years to an eight-year term. [13] In case of a vacancy, a judge was temporarily appointed by the Governor, [14] and at the next odd-year state election a judge was elected for the remainder of the term. [15] The Chief Judge was always that one of the elected judges who had the shortest remaining term. Besides, the Court had a Clerk who was elected to a three-year term.

In 1869, the proposed new State Constitution was rejected by the voters. Only the "Judicial Article", which re-organized the New York Court of Appeals, was adopted by a small majority, with 247,240 for and 240,442 against it. The Court of Appeals was wholly re-organised, taking effect on July 4, 1870. All sitting judges were legislated out of office, and seven new judges were elected by general ballot at a special election on May 17, 1870. [16] Democrat Sanford E. Church defeated Republican Henry R. Selden for Chief Judge. The tickets for associate judges had only four names each and the voters could cast only four ballots, so that four judges were chosen by the majority [17] and two by the minority. [18] Martin Grover was the only sitting judge who was re-elected. The judges were elected to a 14-year term, which most judges did not complete, since the Constitution mandated the retirement of the judges at the end of the calendar year in which they reached the age of 70. In case of a vacancy due to death or resignation, a judge was appointed by the Governor until a successor was chosen at the next State election. To replace retiring or appointed judges, all substitutes were elected to full 14-year terms. 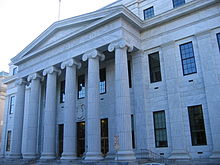 A view of the courthouse's neoclassical portico

In 1889, a "Second Division" of the Court of Appeals was established temporarily to help to decide the large number of cases. Its seven members were designated [19] by Governor David B. Hill, chosen from the New York Supreme Court's General Term benches. Chief Judge was Daniel L. Follett. Among its members were Alton B. Parker and Joseph Potter. [20] The Second Division was continued through 1890. [21] In 1891, the State Constitutional Commission, headed by William B. Hornblower drafted an amendment to abolish the Second Division. [22]

Jacob D. Fuchsberg and Lawrence H. Cooke were the last judges elected by general ballot at the State election in November 1974. Afterwards the judges have been appointed by the Governor and confirmed by the New York State Senate.

The Court of Appeals has decided some of the most important cases in American jurisprudence. [23]