From Wikipedia, the free encyclopedia
The highest court in the U.S. state of Arizona

The Arizona Supreme Court is the state supreme court of the U.S. state of Arizona. Sitting in the Supreme Court building in downtown Phoenix, the court consists of a chief justice, a vice chief justice, and five associate justices. Each justice is appointed by the governor of Arizona from a list recommended by a bipartisan commission. Justices stand for retention in an election two years after their appointment and then every six years. [1] They must retire at age 70.

The Chief Justice is chosen for a five-year term by the court, and is eligible for re-election. They supervise the administration of all the inferior courts. They are Chairman of the Commission on Appellate Court Appointments, which nominates candidates to fill vacancies in the appellate courts. If the Governor fails to appoint one of the nominated candidates within sixty days of their names being submitted to her or him, the Chief Justice makes the appointment. 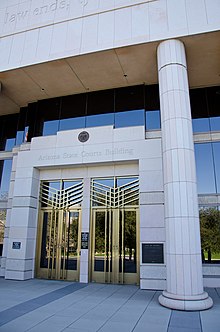 Justices are selected by a modified form of the Missouri Plan. A bipartisan commission considers applicants and sends a list of nominees to the governor. The governor is required by law to appoint from this list based on merit, without regard to party affiliation. Justices are then retained for an initial period, after which they are subject to a retention election. If the justice wins the election, his/her term is six years.

Main article: List of Justices of the Arizona Supreme Court