KVEA first went on the air on June 29, 1966 as independent station KMTW-TV. The station was founded by Mount Wilson Broadcasting, which planned to expand into the television market. Mount Wilson Broadcasting sold the station's license to Kaiser Broadcasting (which owned UHF independents in several large media markets) before KMTW's debut. It was the third commercial UHF station in Los Angeles, after KIIX-TV (channel 22, now KWHY-TV) and KMEX-TV (channel 34). Kaiser changed channel 52's call letters to KBSC-TV, standing for "Kaiser Broadcasting Southern California" (the KMTW call sign is currently used by a MyNetworkTV affiliate in Wichita, Kansas).

The station operated on a half-day schedule, usually signing on in the early afternoon and signing off in the late evening. KBSC carried general entertainment: cartoons, short films, sitcoms and old movies. Weekday-afternoon programming was directed at children, with Japanese cartoons dubbed into English (including Speed Racer, Kimba the White Lion, Ultraman, Johnny Sokko and Gigantor) and compilations of comedy short subjects by the Three Stooges and the Little Rascals.

KBSC also aired programs produced by other Kaiser stations, such as WKBD's Lou Gordon Program. Gordon's weekly show was broadcast at least twice a week (on Saturdays and Sundays) during the early 1970s. Programs rarely flowed smoothly from one to the next; most of the children's programming was punctuated by long breaks, consisting of a shot of the station's logo, call letters and city of license accompanied by Bert Kaempfert's " That Happy Feeling". The logo was a black "52" joined at the top within a white television screen, typical of Kaiser stations; the logo and song began its broadcast day.

In 1976 Kaiser left broadcasting and sold its stations to its partner, Field Communications, except for KBSC and a minority stake in Cleveland station WUAB; the latter was sold by majority owner United Artists to Gaylord Broadcasting. KBSC, not included in the deal due to its low ratings and lack of growth potential in the Los Angeles market, was sold to Oak Communications.

The station's general-entertainment format initially remained the same from its noon sign-on. By April 1977, KBSC's programming ran from 1:15 p.m. to 8:00 p.m. It then became the Los Angeles-area outlet of ONTV, which carried movies and live sports and whose programming aired after 8:00 p.m.-12:00 midnight on weekdays and 8:00 p.m.-2:00am on weekends.

In September 1985 KBSC was sold to Miami-based NetSpan, which became Telemundo in 1987. It was the first mainland U.S. station owned by Telemundo at the network's beginning. ONTV was dropped, and the station's call letters were changed to KVEA; KBSC callsign was later used for low-powered station in Brookings, Oregon. The call letters represent the Spanish phrase Que vea, meaning "You should see".

NBC purchased Telemundo in 2001, creating a triopoly with NBC-owned-and-operated KNBC and Spanish-language independent KWHY (channel 22; that station was later sold in 2011). Los Angeles and San Francisco are the only markets where a company can legally own three stations, due to Federal Communications Commission rules permitting ownership of more than two stations in markets with a minimum of 20 full-power television stations.[ citation needed] KVEA's news, promotion and senior-management operations moved to NBC's Burbank studios. In spring 2014, the station's news department moved to Universal Studios Hollywood, where it shares a new broadcast facility with KNBC.

KVEA shut down its analog signal, over UHF channel 52, on June 12, 2009, as part of the federally mandated transition from analog to digital television. [4] The station's digital signal remained on its pre-transition UHF channel 39, using PSIP to display its virtual channel as 52 on digital television receivers, which was among the high band UHF channels (52-69) that were removed from broadcasting use as a result of the transition. 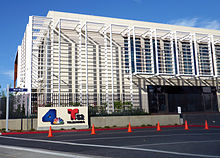 The station's news department, which had initially broadcast at 6 and 11 p.m. weekdays after its acquisition by Telemundo, expanded on January 15, 2001 to compete with Spanish-language news station KMEX. A weekday news program from 6 to 7 a.m., Buenos Días Los Angeles, accompanied the two evening newscasts and new anchors and reporters were introduced.

After the September 11 attacks in 2001, KVEA expanded Buenos Días to two hours, starting at 5 a.m. The morning newscasts were anchored by Mexican native Azalea Iniguez, Mexican journalist and former CBS Telenoticias reporter Ruben Luengas and weather anchor-feature reporter Sal Morales (who joined KVEA from its San Francisco sister station KSTS and was a substitute anchor for Luengas). California Highway Patrol officer Guillermo Preciado later joined the newscasts as a traffic reporter. The news team's lineup introduced the idea of familia unida (a united family) implemented by news director Al Corral, who based the concept on his belief that Hispanics are loyal to what they know and shy away from news from other sources. Ratings improved, and Buenos Días competed with KMEX's morning newscast Primera Edicion. Iniguez was later moved to an anchor position on Buenos Días.

KVEA then introduced Noticiero 52 with graphics, music, and an anchor team: Lucia Navarro (from Houston sister station KTMD), Tijuana reporter Vicente Calderon and Mario Solis. Solis left after a disagreement with station management, and was replaced by Mauricio Cardenas. Calderon was transferred to the newly acquired independent station KWHY-TV (channel 22) to anchor its 10 p.m. newscast with Pilar Gariboto. Navarro was joined by former Telemundo and Telenoticias anchor Raul Peimbert, who later left the station for a government position in his native Mexico. Ratings fell due to personnel changes, and longtime Univision anchor Eduardo Quezada joined Navarro at 6 and 11 p.m. In early 2006, Navarro and Quezada were moved from the 11 p.m. newscast to a new program anchored by Luengas.

In 2006 Eduardo Quezada left KVEA and the station renamed its 11 p.m. newscast En Contexto, anchored by Luengas. The format change was successful, with the program winning several journalism awards.[ citation needed] Sports announcer and former KVEA weekend sports anchor Adrian Garcia Marquez replaced Luengas on Buenos Días, joining Iniguez, entertainment reporter Victor Cordero and weather anchor Ericka Pino. Morales had left the station and went back to his hometown, Miami, to work as a full-time reporter for WSBS-22, known as Mega TV. After this lineup was put in place in summer 2007, the program's ratings fell, and KMEX was back on top.

Also in 2006, NBC's 2.0 restructuring plan for its broadcast properties resulted in across-the-board layoffs, including reporter Osmin Rodriguez and KWHY anchor Vicente Calderon; Jose Ronstadt became the news anchor. On July 3, 2007, Los Angeles Mayor Antonio Villaraigosa admitted to the Los Angeles Daily News that he had been having an extramarital affair with KVEA reporter Mirthala Salinas. [5] Telemundo's Miami management replaced station general manager Manuel Abud with interim GM Mike Rodriguez, general manager of Miami sister station WSCV. News director Al Corral and Salinas were given two-month leaves of absence, and Rodriguez made it clear that he would not be taking the job permanently.

On September 15, 2007, KVEA became the second Spanish-language television station in the United States (after Reno-based CW affiliate KAZR-CA) and the sixth television station in the Los Angeles market to broadcast its local newscasts (Buenos Días Los Angeles) in high definition. In 2009, Buenos Días was cancelled due to difficulties with NBC. Its anchors became reporters, and were joined by former KWHY anchor Dunia Elvir (who had presented morning updates during ¡Levántate!, now known as Un Nuevo Día). Although the morning show and Elvir's 1 p.m. program on KWHY were cancelled, NBCUniversal's acquisition by Comcast that year resulted in the return of Buenos Días in 2011. In 2014, the program moved to 5 a.m.

The 2014 Telemundo revamp included more changes to the news team, a new studio, a new network-wide graphics package, and a network-wide time change for the weekend newscast (from 6 to 5:30 p.m.). The station's news department refocused on the two evening newscasts, which included investigative reporting of a wide range of stories. Most anchors again became reporters, and Edgar Muñoz joined previous chief anchor Ana Patricia Candiani. Buenos Días Los Angeles added Julio Vaqueiro and Estefanía Iglesias to its team, expanding to 5 a.m. with sister station WNJU-TV. In February 2014, Denny Alfonso became the investigative and consumer reporter on its "Telemundo 52 Responde" segment. On September 18, 2014, Telemundo announced that its 14 local stations would carry a 5:30 p.m. weekday newscast. On September 25, its 11 p.m. newscast outdrew rival KMEX-TV in ratings for the first time in 27 years. [6] On February 22, 2018, The network began producing and broadcasting news. Miami, New York and Los Angeles and other owned and operated television stations, joined this effort producing more newscasts those some of their rivals in markets in Spanish.