From Wikipedia, the free encyclopedia
For the cable channel, see NBCSN.
Sports division of NBCUniversal

NBC Sports is an American programming division of the broadcast network NBC, owned and operated by NBC Sports Group division of NBCUniversal and subsidiary of Comcast, that is responsible for sports broadcasts on the network, and its dedicated national sports cable channels. Formerly operating as "a service of NBC News", it broadcasts a diverse array of sports events, including the French Open, the IndyCar Series, NASCAR, NFL, NHL, Notre Dame football, Olympic Games, the PGA Tour, Premier League, Tour de France and Triple Crown, among others. Other programming from outside producers – such as coverage of the Ironman Triathlon – is also presented on the network through NBC Sports. With Comcast's acquisition of NBCUniversal in 2011, its own cable sports networks were aligned with NBC Sports into a part of the division known as the NBC Sports Group.

In 2000, NBC declined to renew its broadcast agreement with Major League Baseball. In 2002, it was additionally outbid by ESPN and ABC for the NBA's new broadcast contract, ending the league's twelve-year run on NBC.

During this era, NBC experimented with broadcasting emerging sports. In 2001, the network partnered with the World Wrestling Federation (WWF) to establish the XFL – a new football league which introduced modified rules and debuted to tremendous, but short-lived fanfare, only lasting one season (NBC shared broadcast rights to the league's games, which were mainly held on Saturday nights, with UPN). In 2003, NBC obtained the broadcast rights and a minority interest in the Arena Football League. The network televised weekly games on a regional basis, as well as the entire playoffs. The deal lasted four years, after which the league and NBC parted ways.

Beginning with the 1999 Pennzoil 400, NBC began its foray into NASCAR. NBC, along with Fox, FX and TNT, obtained the broadcast rights of the top two series – the Winston Cup and Busch Series – in a six-year deal, beginning in 2001. NBC televised the second half of the season and alternated coverage of the Daytona 500 with Fox. In December 2005, NBC announced that it would not renew its agreement with NASCAR. In 2001, NBC obtained the broadcast rights to horse racing's Triple Crown in a five-year deal.

In 2004, NBC reached a broadcast agreement with the National Hockey League (NHL). The revenue-sharing deal called for the two sides to split advertising revenue after the network recouped the expenses. Games were supposed to begin airing on the network during the 2004–05 season, however a league lockout that resulted in the cancellation of that season delayed the start of the contract until the second half of the 2005–06 season. NBC televised regular season games at first on Saturday afternoons before moving the telecast to Sundays, Saturday and Sunday afternoon playoff games, and up to five games of the Stanley Cup Final. Additionally in 2008, NBC broadcast the first Winter Classic, an outdoor NHL game played on New Year's Day at Ralph Wilson Stadium, a success in attendance and television ratings. The following year's Winter Classic would become the most-watched regular season game in 34 years. [1] In addition to this regular season success, Game 7 of the 2009 Stanley Cup Final was watched by an average of 8 million viewers, the highest ratings for an NHL game in 36 years. [2]

In January 2011, Comcast finalized its acquisition of a majority share in NBC Universal. As a result of the merger, the operations of Comcast's existing sports networks, such as Golf Channel and Versus, were merged into an entity known as the NBC Sports Group. NBC Sports' senior vice president Mike McCarley additionally became Golf Channel's new head. [3] NBC Sports' golf production unit was merged with Golf Channel, along with NBC's on-air staff, with that unit rebranding under the banner " Golf Channel on NBC", while Versus was reformatted toward a more mainstream audience, renamed the NBC Sports Network and eventually rebranded as NBCSN. [4]

The merger also helped influence an extension of NBC Sports' contract with the NHL; the 10-year deal – valued at close to $2 billion, unified the cable and broadcast television rights to the league and introduced a new " Black Friday" Thanksgiving Showdown game on NBC, along with national coverage for every game in the Stanley Cup playoffs. [5] On July 3, 2011, ESPN obtained the exclusive broadcast rights to Wimbledon in a 12-year deal, ending NBC's television relationship with The Championships after 42 years. [6]

NBC Sports held broadcast rights to the Formula One World Championship (formerly held by Speed and Fox Sports) from 2013 until 2017. The majority of its coverage (including much of the season, along with qualifying and practice sessions) aired on NBCSN, while NBC aired the Monaco Grand Prix, Canadian Grand Prix and the final two races of the season, which in the first year of the deal included the United States Grand Prix. All races were also streamed online and through the NBC Sports Live Extra mobile app. [9] [10] [11] They lost the broadcast rights to ESPN beginning from the 2018 season. [12] [13]

On March 18, 2013, nearly all of the operations for NBC Sports and NBCSN began to be based out of a purpose-built facility in Stamford, Connecticut. The move was made mainly to take advantage of tax credits given by the state of Connecticut, which NBC has taken advantage of previously with the daytime talk shows of its sister broadcast syndication division. [14] Only Football Night in America remained in New York City, at Studio 8G in Rockefeller Center, until September 7, 2014, when production of that program also moved to Stamford.

NASCAR returned to NBC Sports properties in 2015 under a ten-year deal, with NBC once again airing the second half of the NASCAR Cup Series and Xfinity Series seasons. While no specific financial details were disclosed, NBC reportedly paid 50% more than ESPN and TNT (who took over the portion of the season previously held by NBC) combined under the previous deal. [15] [16]

In May 2015, NBCUniversal announced the formation of NBC Deportes (later renamed Telemundo Deportes), which serves as the Spanish-language branch of NBC Sports for Telemundo and NBC Universo. [17]

On June 7, 2015, NBC Sports and The R&A agreed to a twelve-year deal to televise The Open Championship, Senior Open Championship, and Women's British Open on NBC and Golf Channel, beginning in 2017. [18] The move came a year after NBC lost the rights to USGA tournaments to Fox Sports but fox sports opted out after the 5th year of the deal therefore nbc picked up the rights for the remainder of the deal(which the deal lasts for 12 years) The R&A's deal with ESPN had been through 2017, but the broadcaster opted out of the final year of their agreement. [19]

From 2016 until 2018, NBC Sports held the rights to Premiership Rugby, the top division of English rugby union, through a three-year deal. The contract included up to 24 regularly-scheduled games on NBCSN per-season, and up to 50 streaming. Its first live match was on March 12, 2016, when London Irish hosted Saracens F.C. at Red Bull Arena in Harrison, New Jersey. [21]

In early 2018, it was announced that NBC Sports would renew its contract with the IndyCar Series (continuing a relationship with NBCSN which began in 2009 as Versus), [24] through 2021, and acquire the broadcast television rights previously held by ABC. NBC televises eight races per-season since 2019, including the series flagship Indianapolis 500, with the remaining races airing on NBCSN as before. An IndyCar package is also offered through NBC Sports Gold. [25] [26] Shortly after, NBC announced a six-year agreement with the IMSA beginning 2019, including the WeatherTech SportsCar Championship, with the majority of coverage on NBCSN. [27]

On June 29, 2020, NBC re-acquired the rights of the USGA Championships (U.S. Open, U.S. Women's Open, U.S. Amateur, U.S. Women's Amateur) from FOX Sports beginning with the 2020 U.S. Open. Under the arrangement of the original 12 year deal, NBC would carry the event until 2026 airing the later rounds while The Golf Channel would broadcast the early rounds in their entirety. [28]

In 1964, NBC televised the Summer Olympics in Tokyo; in 1972, NBC televised the Winter Olympic Games for the first time. 1980 would prove to be a stinging disappointment for the network; after contentious negotiations, NBC won the broadcast rights to the Summer Games in Moscow. After the Soviet Union invaded Afghanistan, the United States and 64 other countries boycotted the event. NBC substantially scaled back its coverage and lost heavily in advertising revenue. In 1988, NBC televised the Summer Olympics in Seoul. Since then, it has branded itself as "America's Olympic Network", televising every Summer Olympic Games since the Seoul event, as well as every Winter Olympics since 2002. In total, NBC has aired 13 Summer and Winter Olympics, the most by any one U.S. network. The Olympic Games have also become an integral part of the network, despite some recurring controversy over its method of tape delaying events in part to take advantage of a wider national audience in prime time.

In 1998, Ebersol was named president of NBC Sports and Olympics.

During the 2014 Winter Olympics in Sochi, Russia, over 500 hours of the games were broadcast across five NBC-owned television channels (NBC, NBCSN, CNBC, MSNBC and USA Network), with 1,000 hours being streamed digitally. [31] In January, the company announced some exclusive digital-only streaming of the 2014 Olympics via the NBCOlympics.com website and the NBC Sports Live Extra app for Android and iOS, including exclusive content such as Gold Zone, Olympic Ice and NBC's Olympic News Desk. [32]

With the premiere of Sunday Night Football, NBCUniversal hired Troika Design Group to design an overall visual identity for its coverage, including branding, on-air graphics, and other visual elements. [33]

Concurrent with the relaunch of Versus as NBC Sports Network on January 2, 2012, and the 2012 NHL Winter Classic, NBC Sports also launched a comprehensive redesign of its branding, including a new on-air graphics design built around the NBC peacock, and an updated logo for the division as a whole (replacing a logo that had been in use since 1989). The new design was also intended to be modular, allowing it to be expanded for use in larger events across multiple networks (such as the Super Bowl and the Olympic Games). [34] A refreshed design for on-air graphics was introduced on January 1, 2015 (in time for the 2015 NHL Winter Classic and NFL playoffs), with a cleaner and brighter visual appearance. [35]

NBC debuted a new graphics package specifically for Sunday Night Football during Super Bowl LII. NBC producer Fred Gaudelli stated that the network wanted the Sunday night games to have a more distinctive presentation to set them apart from other games. [36] NBC similarly diverged for its Premier League coverage in 2019, adopting elements of its new British sibling Sky Sports. [37]

Programs throughout the years 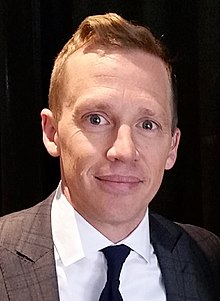 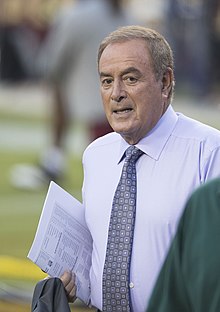