Horace Julian Bond (January 14, 1940 – August 15, 2015) was an American social activist, leader of the civil rights movement, politician, professor, and writer. While he was a student at Morehouse College in Atlanta, Georgia, during the early 1960s, he helped establish the Student Nonviolent Coordinating Committee (SNCC). In 1971, he helped found the Southern Poverty Law Center in Montgomery, Alabama, and served as its first president for nearly a decade.

Bond was born at Hubbard Hospital in Nashville, Tennessee, to parents Julia Agnes (Washington) and Horace Mann Bond. His father was an educator who later served as the president of Lincoln University, a historically black university in Pennsylvania. [4] [5] His mother, Julia, was a former librarian at Clark Atlanta University. [6]

The family resided on campus at Fort Valley State College, where Horace was president. The house of the Bonds was a frequent stop for scholars, activists, and celebrities passing through, such as W. E. B. Du Bois and Paul Robeson.

On April 17, 1960, Bond helped co-found the Student Nonviolent Coordinating Committee (SNCC). [9] He served as the communications director of SNCC from January 1961 to September 1966, when he traveled around Georgia, Alabama, Mississippi, and Arkansas, to help organize civil rights and voter registration drives. Bond left Morehouse College in 1961 to work on civil rights in the south. [10] From 1960 to 1963, Bond led student protests against segregation in public facilities and the other Jim Crow laws of Georgia. [11]

Bond returned to Morehouse College in 1971, then aged 31, to complete his Bachelor of Arts in English. [12] With Morris Dees, Bond helped found the Southern Poverty Law Center (SPLC), a public-interest law firm based in Montgomery, Alabama. [13] Bond served as its president from 1971 until 1979. [14] Bond was an emeritus member of the Southern Poverty Law Center board of directors at time of his death in 2015. [15] Bond also advocated for Africans in Europe. [16]

In 1965, Bond was one of 11 African Americans elected to the Georgia House of Representatives after passage of the Civil Rights Act of 1964 and Voting Rights Act of 1965 had opened voter registration to blacks. By ending the disfranchisement of blacks through discriminatory voter registration, African Americans regained the ability to vote and entered the political process. [17] Although he was initially undecided about his party affiliation, Bond ultimately ran and was elected as a Democrat, the party of President Lyndon B. Johnson, who had signed the Civil Rights Act and Voting Rights Act into law. [18] On January 10, 1966, Georgia state representatives voted 184–12 not to seat him, because he had publicly endorsed SNCC's policy regarding opposition to United States involvement in the Vietnam War. [19] They disliked his stated sympathy for persons who were "unwilling to respond to a military draft." [20] A three-judge panel on the United States District Court for the Northern District of Georgia ruled in a 2–1 decision that the Georgia House had not violated any of Bond's constitutional rights. In 1966, the Supreme Court of the United States ruled 9–0 in the case of Bond v. Floyd (385 U.S. 116) that the Georgia House of Representatives had denied Bond his freedom of speech and was required to seat him. From 1967 to 1975, Bond was elected to four terms in the Georgia House, where he organized the Georgia Legislative Black Caucus. [21]

In January 1967, Bond was among eleven House members who refused to vote when the legislature elected segregationist Democrat Lester Maddox of Atlanta as governor of Georgia over the Republican Bo Callaway. Callaway had led in the 1966 general election by some three thousand votes. The choice fell on state lawmakers under the Georgia Constitution of 1824, because neither major party candidate had polled a majority in the general election. Former Governor Ellis Arnall polled more than fifty thousand votes as a write-in candidate, a factor which led to the impasse. Bond would not support either Maddox or Callaway, although he was ordered to vote by lame duck Lieutenant Governor Peter Zack Geer. [22]

Throughout his House career, Bond's district was repeatedly redistricted:

During the 1968 presidential election, Bond led an alternate delegation from Georgia to the Democratic National Convention in Chicago, where he became the first African American to have his name entered into nomination as a major-party candidate for Vice President of the United States. The 28-year-old Bond quickly declined the nod, citing the constitutional requirement that one must be at least 35 years of age to serve in that office. [27] [28]

Bond ran for the United States House of Representatives from Georgia's 5th congressional district in 1986. He lost the Democratic nomination in a runoff to rival civil rights leader John Lewis in a bitter contest, [29] during which Bond was accused of using cocaine and other drugs. [30] During the campaign, Lewis challenged Bond to take a drug test (Lewis had said he took one and passed). Bond refused, saying the drug test was akin to McCarthyism and trivializes the issue of drugs. [31] While Bond had raised twice as much money as Lewis and had a larger national reputation, Lewis cast himself as the man on the front lines of the Civil Rights Movement and ran up large margins over Bond among white liberals in Atlanta. [32] As the district had a huge Democratic majority, the nomination delivered the seat to Lewis, who served in Congress for 30 years until his death on July 17, 2020. Still dogged by allegations of drug use, Bond resigned from the Georgia Senate the following year. [33] [34] Bond's estranged wife, Alice, who publicly accused him of using cocaine, later retracted her statements. [28]

After leaving politics, Bond taught at several universities in major cities in the North and South, including American, [35] Drexel, [36] and Harvard. [37] Bond taught the history of the civil rights movement at the University of Virginia from 1990 to 2012. While there he had the chance to share his experiences of the movement with thousands of students through stories, newsreels, music, and film. [38] Bond was on the Board of Selectors of Jefferson Awards for Public Service. [39]

Bond became the first president of the Southern Poverty Law Center [40] in 1971. He served until 1979, remaining a board member and president emeritus for the rest of his life. [41] In 1998, Bond was selected as chairman of the NAACP. Bond once referred to leading the NAACP as "the most powerful job a Black man can have in America." [42] In November 2008, he announced that he would not seek another term as chairman. [43] Bond agreed to stay on in the position through 2009, as the organization celebrated its 100th anniversary. Roslyn M. Brock was chosen as Bond's successor on February 20, 2010. [44] 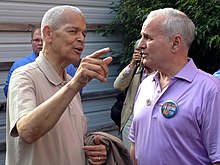 Julian Bond and Minnesota Governor Mark Dayton at a rally opposing a ballot initiative aimed at prohibiting same-sex marriage in that state in June 2012.

Bond was an outspoken supporter of the rights of gays and lesbians. He publicly stated his support for same-sex marriage. Most notably, he boycotted the funeral services for Coretta Scott King on the grounds that the King children had chosen an anti-gay megachurch as the venue. This was in conflict with their mother's longstanding support for the rights of gay and lesbian people. [45] In a 2005 speech in Richmond, Virginia, Bond stated:

African Americans ... were the only Americans who were enslaved for two centuries, but we were far from the only Americans suffering discrimination then and now ... Sexual disposition parallels race. I was born this way. I have no choice. I wouldn't change it if I could. Sexuality is unchangeable. [46]

In a 2007 speech on the Martin Luther King Day Celebration at Clayton State University in Morrow, Georgia, Bond said, "If you don't like gay marriage, don't get gay married." His positions pitted elements of the NAACP against religious groups in the Civil Rights Movement who oppose gay marriage. Most resistance came from within the Southern Christian Leadership Conference (SCLC), which was partially blamed for the success of the gay marriage ban amendment in California. [47] On October 11, 2009, Bond appeared at the National Equality March in Washington, D.C., and spoke about the rights of the LGBT community, a speech which was aired live on C-SPAN. [48] [49] Bond was a strong critic of policies that contribute to anthropogenic climate change and was amongst a group of protesters arrested at the White House for civil disobedience in opposition to the Keystone XL pipeline in February 2013. [50]

(L-R) Bond with John Lewis, US Representative from Georgia, at the Civil Rights Summit at the LBJ Presidential Library in 2014

Bond was a strong critic of the George W. Bush administration from its assumption of office in 2001, in large part because he believed it was illegitimate. Twice that year, first in February when he spoke to the NAACP board and then in July when he spoke at that organization's national convention, he attacked the administration for selecting Cabinet secretaries "from the Taliban wing of American politics". Bond specifically targeted Attorney General John Ashcroft, who had opposed affirmative action, and Interior Secretary Gale Norton, who defended the Confederacy in a 1996 speech on states' rights. In the selection of these individuals, Bond said, Bush had appeased "the wretched appetites of the extreme right wing and chosen Cabinet officials whose devotion to the Confederacy is nearly canine in its uncritical affection". The then House Majority Leader Dick Armey responded to Bond's statement with a letter in which he accused NAACP leaders of "racial McCarthyism". [51] Bond later added at the annual NAACP convention that year, that since Bush's election he had "had his picture taken with more black people than voted for him." [51]

On May 14, 2013, while appearing on MSNBC, Bond called the Tea Party the "Taliban wing of American politics". [52] Bond told MSNBC, "I think it's entirely legitimate to look at the Tea Party." But he also said, "It was wrong for the IRS to behave in this heavy-handed manner. They didn't explain it well before or now what they're doing and why they're doing it." He called Tea Party members "a group of people who are admittedly racist, who are overtly political, who've tried as best as they can to harm President Obama in every way they can". He added, "We all ought to be a little worried about them." [52]

Work and appearances in media

Julian Bond during the filming of Julian Bond: Reflections from the Frontlines of the Civil Rights Movement

In 2012, Bond was centrally featured in Julian Bond: Reflections from the Frontlines of the Civil Rights Movement, a documentary film by Eduardo Montes-Bradley. [53] [54] From 1980 to 1997, Bond hosted America's Black Forum. [28] He was also a commentator for radio's Byline and NBC's The Today Show. [55] He authored the nationally syndicated newspaper column Viewpoint, [35] and narrated the critically acclaimed PBS series Eyes on the Prize in 1987 and 1990. [56]

Bond hosted Saturday Night Live on April 9, 1977, becoming the first black political figure to host the television show. In the same year, he also appeared in the Richard Pryor vehicle Greased Lightning. In 1978, Bond played himself in the miniseries King. [57] He also had a small appearance playing State Representative John E. White in the movie Ray (2004), [58] in addition to another small appearance in which he played himself in the movie 5 to 7 (2014). [59]

On July 28, 1961, Bond married Alice Clopton, a student at Spelman College; they divorced on November 10, 1989. They had five children: Phyllis Jane Bond-McMillan, Horace Mann Bond II, Michael Julian Bond (an Atlanta City Councilman), Jeffrey Alvin Bond and Julia Louise Bond. He married Pamela Sue Horowitz, a former SPLC staff attorney, in 1990. [60] Bond died from complications of vascular disease on August 15, 2015, in Fort Walton Beach, Florida, at the age of 75. He is survived by his wife, his five children, his brother James and sister Jane Bond Moore, and eight grandchildren. [41]