From Wikipedia, the free encyclopedia
Coral island located in the South Pacific Ocean

Jarvis Island ( /ˈdʒɑːrvɪs/; formerly known as Bunker Island or Bunker's Shoal) is an uninhabited 1 3⁄4-square-mile (4.5 km2) coral island located in the South Pacific Ocean, about halfway between Hawaii and the Cook Islands. [1] It is an unincorporated, unorganized territory of the United States, administered by the United States Fish and Wildlife Service of the United States Department of the Interior as part of the National Wildlife Refuge system. [2] Unlike most coral atolls, the lagoon on Jarvis is wholly dry.

Jarvis is one of the Line Islands and for statistical purposes is also grouped as one of the United States Minor Outlying Islands. Jarvis Island is the largest of three U.S. equatorial possessions, which include Baker Island and Howland Island. [3] 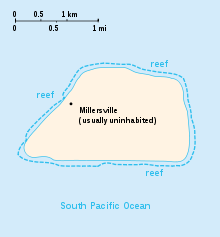 While a few offshore anchorage spots are marked on maps, Jarvis island has no ports or harbors, and swift currents are a hazard. There is a boat landing area in the middle of the western shoreline near a crumbling day beacon, and another near the southwest corner of the island. [4] The center of Jarvis island is a dried lagoon where deep guano deposits accumulated, which were mined for about 20 years during the nineteenth century. The island has a tropical desert climate, with high daytime temperatures, constant wind, and strong sun. Nights, however, are quite cool. The ground is mostly sandy and reaches 23 feet (7 meters) at its highest point. Because of the island's distance from other large landmasses, the Jarvis Island high point is the 36th most isolated peak in the world. The low-lying coral island has long been noted as hard to sight from small ships and is surrounded by a narrow fringing reef.

Jarvis Island is one of two United States territories that are in the southern hemisphere (the other is American Samoa). Located only 25 miles (40 km) south of the equator, Jarvis has no known natural freshwater lens and scant rainfall. [5] [6] This creates a very bleak, flat landscape without any plants larger than shrubs. [7] There is no evidence that the island has ever supported a self-sustaining human population. Its sparse bunch grass, prostrate vines and low-growing shrubs are primarily a nesting, roosting, and foraging habitat for seabirds, shorebirds, and marine wildlife. [2]

Jarvis Island was submerged underwater during the latest interglacial period, roughly 125,000 years ago, when sea levels were 5–10 meters higher than today. As the sea level declined, the horseshoe-shaped lagoon was formed in the center of Jarvis Island. [8]

Jarvis Island once held some of the largest seabird breeding colonies in the tropical ocean, but guano mining and the introduction of rodents have ruined much of the island's native wildlife. Just eight breeding species were recorded in 1982, compared to thirteen in 1996, and fourteen species in 2004. The Polynesian storm petrel had made its return after over 40 years absent from Jarvis Island, and the number of Brown noddies multiplied from just a few birds in 1982 to nearly 10,000. Just twelve Gray-backed terns were recorded in 1982, but by 2004, over 200 nests were found on there. [11] The island, with its surrounding marine waters, has been recognised as an Important Bird Area (IBA) by BirdLife International because it supports colonies of lesser frigatebirds, brown and masked boobies, red-tailed tropicbirds, Polynesian storm petrels, blue noddies and sooty terns, as well as serving as a migratory stopover for bristle-thighed curlews. [12] 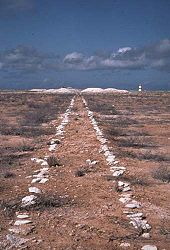 Remains of a guano tramway on Jarvis Island, looking west with 125-year-old heaps of mined but never-shipped guano in the background near the day beacon

The island's first known sighting by Europeans was on August 21, 1821, by the British ship Eliza Francis (or Eliza Frances) owned by Edward, Thomas and William Jarvis [13] [14] and commanded by Captain Brown. The island was visited by whaling vessels till the 1870s.

The U.S. Exploring Expedition surveyed the island in 1841. [15] In March 1857 the island was claimed for the United States under the Guano Islands Act and formally annexed on February 27, 1858.

The American Guano Company, which was incorporated in 1857, established claims in respect of Baker Island and Jarvis Island which was recognized under the U.S. Guano Islands Act of 1856. [16] [17] Beginning in 1858, several support structures were built on Jarvis Island, along with a two-story, eight-room "superintendent's house" featuring an observation cupola and wide verandahs. Tram tracks were laid down for bringing mined guano to the western shore. One of the first loads was taken by Samuel Gardner Wilder. [18] For the following twenty-one years, Jarvis was commercially mined for guano, sent to the United States as fertilizer, but the island was abruptly abandoned in 1879, leaving behind about a dozen buildings and 8,000 tonnes of mined guano. 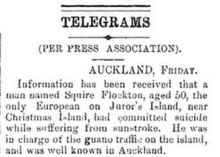 News story of Squire Flockton's death on Jarvis. The name Juror's Island in the article is a typographical error for Jarvis Island. [19]

New Zealand entrepreneurs, including photographer Henry Winkelmann, then made unsuccessful attempts to continue guano extraction on Jarvis, and the two-storey house was sporadically inhabited during the early 1880s. Squire Flockton was left alone on the island as caretaker for several months and committed suicide there in 1883, apparently from gin-fueled despair. [20] His wooden grave marker was a carved plank which could be seen in the island's tiny four-grave cemetery for decades. [21]

John T. Arundel & Co. resumed mining guano from 1886 to 1899. [22] [23] The United Kingdom annexed the island on June 3, 1889. Phosphate and copra entrepreneur John T. Arundel visited the island in 1909 on maiden voyage of the S.S. Ocean Queen and near the beach landing on the western shore members of the crew built a pyramidal day beacon made from slats of wood, which was painted white. [21] The beacon was standing in 1935, [24] and remained until at least 1942. 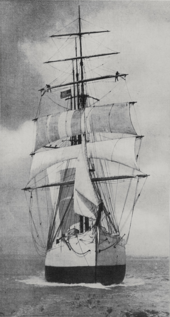 The Amaranth before it was wrecked

On August 30, 1913, the barquentine Amaranth (C. W. Nielson, captain) was carrying a cargo of coal from Newcastle, New South Wales, to San Francisco when it wrecked on Jarvis' southern shore. Ruins of ten wooden guano-mining buildings, the two-story house among them, could still be seen by the Amaranth crew, who left Jarvis aboard two lifeboats. One reached Pago Pago, American Samoa, and the other made Apia in Western Samoa. The ship's scattered remains were noted and scavenged for many years, and rounded fragments of coal from the Amaranth's hold were still being found on the south beach in the late 1930s. [25] 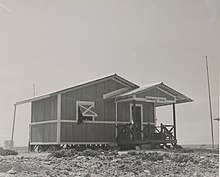 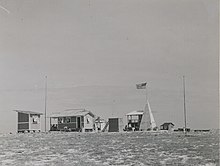 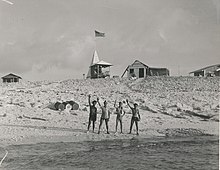 Four people wave goodbye before they begin their shifts as colonists.

Jarvis Island was reclaimed by the United States government and colonized from March 26, 1935, onwards, under the American Equatorial Islands Colonization Project (see also Howland Island and Baker Island). President Franklin D. Roosevelt assigned administration of the island to the U.S. Department of the Interior on May 13, 1936. [2] Starting out as a cluster of large, open tents pitched next to the still-standing white wooden day beacon, the Millersville settlement on the island's western shore was named after a bureaucrat with the United States Department of Air Commerce. The settlement grew into a group of shacks built mostly with wreckage from the Amaranth (lumber from which was also used by the young Hawaiian colonists to build surfboards), but later, stone and wood dwellings were built and equipped with refrigeration, radio equipment, and a weather station. [26] A crude aircraft landing area was cleared on the northeast side of the island, and a T-shaped marker which was intended to be seen from the air was made from gathered stones, but no airplane is known to have ever landed there.

At the beginning of World War II, an Imperial Japanese Navy submarine surfaced off the west coast of the island. Believing that it was a U.S. Navy submarine which had come to fetch them, the four young colonists rushed down the steep western beach in front of Millersville towards the shore. The submarine answered their waves with fire from its deck gun, but no one was hurt in the attack. On February 7, 1942, the USCGC Taney evacuated the colonists, then shelled and burned the dwellings. The roughly cleared landing area on the island's northeast end was later shelled by the Japanese, leaving crater holes. [27] 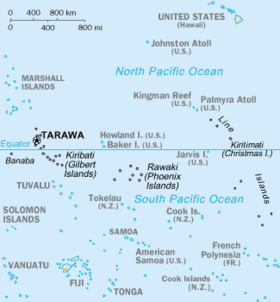 Jarvis was visited by scientists during the International Geophysical Year from July 1957 until November 1958. In January 1958 all scattered building ruins from both the nineteenth century guano diggings and the 1935–1942 colonization attempt were swept away without a trace by a severe storm which lasted several days and was witnessed by the scientists. When the IGY research project ended the island was abandoned again. [28] By the early 1960s a few sheds, a century of accumulated trash, the scientists' house from the late 1950s and a solid, short lighthouse-like day beacon built two decades before were the only signs of human habitation on Jarvis.

On June 27, 1974, Secretary of the Interior Rogers Morton created Jarvis Island National Wildlife Refuge which was expanded in 2009 to add submerged lands within 12 nautical miles (22 km) of the island. The refuge now includes 1,273 acres (5.15 km2) of land and 428,580 acres (1,734.4 km2) of water. [29] Along with six other islands, the island was administered by the U.S. Fish and Wildlife Service as part of the Pacific Remote Islands National Wildlife Refuge Complex. In January 2009, that entity was upgraded to the Pacific Remote Islands Marine National Monument by President George W. Bush. [30]

A feral cat population, descendants of cats likely brought by colonists in the 1930s, wrought disruption to the island's wildlife and vegetation. These cats were removed through efforts which began in the mid-1960s and lasted until 1990 when they were completely eradicated. [31] Since cats were removed, seabird numbers and diversity have increased. [32]

Nineteenth-century tram track remains can be seen in the dried lagoon bed at the island's center and the late 1930s-era lighthouse-shaped day beacon still stands on the western shore at the site of Millersville.

Public entry to anyone, including U.S. citizens, on Jarvis Island requires a special-use permit and is generally restricted to scientists and educators. The U.S. Fish and Wildlife Service and the United States Coast Guard periodically visit Jarvis. [33]

There is no airport on the island, nor does the island contain any large terminal or port. There is a day beacon near the middle of the west coast. Some offshore anchorage is available. [35]