From Wikipedia, the free encyclopedia
583,000 square miles of ocean waters, including ten islands and atolls of the Northwestern Hawaiian Islands

The Papahānaumokuākea Marine National Monument (roughly /pɑːpɑːˈhɑːnaʊmoʊkuˌɑːkeɪ.ə/ [2]) is a World Heritage listed U.S. National Monument encompassing 583,000 square miles (1,510,000 km2) of ocean waters, including ten islands and atolls of the Northwestern Hawaiian Islands. Created in June 2006 with 140,000 square miles (360,000 km2), it was expanded in August 2016 by moving its border to the limit of the exclusive economic zone, [1] making it one of the world's largest protected areas. It is internationally known for its cultural and natural values as follows:

"The area has deep cosmological and traditional significance for living Native Hawaiian culture, as an ancestral environment, as an embodiment of the Hawaiian concept of kinship between people and the natural world, and as the place where it is believed that life originates and to where the spirits return after death. On two of the islands, Nihoa and Mokumanamana, there are archaeological remains relating to pre-European settlement and use. Much of the monument is made up of pelagic and deepwater habitats, with notable features such as seamounts and submerged banks, extensive coral reefs and lagoons." [3]

The monument supports 7,000 species, one quarter of which are endemic. Prominent species include the endangered hawksbill sea turtle, the threatened green sea turtle and the endangered Hawaiian monk seal, the Laysan and Nihoa finches, the Nihoa millerbird, Laysan duck, seabirds such as the Laysan albatross, numerous species of plants including Pritchardia palms, and many species of arthropods. According to the Pew Charitable Trusts, populations of lobster have not recovered from extensive harvesting in the 1980s and 1990s, which is now banned; [4] the remaining fisheries are overfished. [5]

The National Marine Fisheries Service (NMFS) reports that many species populations have not yet fully recovered from a large-scale shift in the oceanic ecosystem that affected the North Pacific during the late 1980s and early 1990s. [6] This shift reduced populations of important species such as spiny lobster, seabirds and Hawaiian monk seals. Commercial fishing ended in 2011. The monument receives strict conservation protection, with exceptions for traditional Native Hawaiian uses and limited tourism. [4]

The monument covers roughly 583,000 square miles (1,510,000 km2) of reefs, atolls and shallow and deep sea (out to 200 miles (320 km) offshore) in the Pacific Ocean – larger than all of America's national parks combined. [7] It contains approximately 10 percent of the tropical shallow water coral reef habitat (i.e., 0 to 100 fathoms) in U.S. territory. [8] It is slightly larger than Australia's Great Barrier Reef Marine Park, approximately the size of the country of Germany, and just slightly smaller than Montana.[ citation needed]

The monument's ocean area is administered by the National Oceanic and Atmospheric Administration (NOAA). It also contains within it a number of U.S. and Hawaiian designated refuges, sanctuaries, reserves and memorials with their own specialized administration. 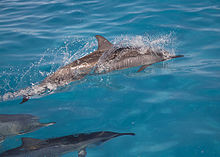 The Northwestern Hawaiian Islands (NWHI) were first protected on February 3, 1909, when U.S. President Theodore Roosevelt created the Hawaiian Islands Bird Reservation through Executive Order 1019, as a response to the over-harvesting of seabirds, and in recognition of the importance of the NWHI as seabird nesting sites. [12] President Franklin D. Roosevelt converted it into the Hawaiian Islands National Wildlife Refuge in 1940. A series of incremental protections followed, leading to the establishment of Midway Atoll National Wildlife Refuge in 1988, Kure Atoll State Wildlife Sanctuary in 1993, and the NWHI Coral Reef Ecosystem Reserve in 2000. [13] [14]

President Bill Clinton established the Northwestern Hawaiian Islands Coral Reef Ecosystem Reserve on December 4, 2000, with Executive Order 13178. Clinton's executive order initiated a process to designate the waters of the NWHI as a National Marine Sanctuary. A public comment period began in 2002. In 2005, Governor of Hawaii Linda Lingle declared parts of the monument a state marine refuge. [15]

In April 2006, President George W. Bush and his wife viewed a screening of the documentary film Voyage to Kure at the White House along with its director, Jean-Michel Cousteau. Compelled by the film's portrayal of the flora and fauna, Bush moved quickly to protect the area. [16] [17] [18] 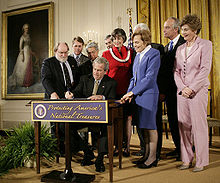 On June 15, 2006, Bush signed Proclamation 8031, designating the waters of the Northwestern Hawaiian Islands a national monument under the 1906 Antiquities Act. Using the Antiquities Act bypassed the normal year of consultations and halted the public input process and came just before the draft environmental impact statement for the proposed Northwestern Hawaiian Islands National Marine Sanctuary was to be published. This was the second use by Bush of the Antiquities Act, following the declaration of the African Burial Ground National Monument on Manhattan in February 2006. [19] The legislated process for stakeholder involvement in the planning and management of a marine protected area had already taken five years of effort, but the abrupt establishment of the NWHI as a National Monument, rather than a Sanctuary, provided immediate and more resilient protection. The protection is revocable only by legislation. [20]

Joshua Reichert [21] proclaimed the importance of the timely designation, saying:

Monument status is quicker; it's more comprehensive; and it's more permanent. Only an act of Congress can undo a monument designation. The sanctuary process, it takes longer; it involves more congressional input, more public debate, more hearings and meetings. And he [George W. Bush] obviously made a decision today to, actually, take a bold step and create something which is going to be immediate, that the law applies immediately to this place now. [22]

The NWHI accounted for approximately half of the locally landed bottomfish in Hawaii. [23] These fish are valued by local chefs and consumers. The NWHI bottomfish fishery was a limited entry fishery, with eight vessels, which were restricted to 60 feet (18 m) in length. [24] [25] Frank McCoy, then chair of the Western Pacific Regional Fishery Management Council, claimed:

We are pleased the President recognizes the near pristine condition of the Northwestern Hawaiian Islands waters. We believe the abundance and biodiversity of the area attests to the successful management of the NWHI fisheries by the Council the past 30 years and indicates that properly regulated fisheries can operate in the NWHI without impacting the ecosystem. The small NWHI bottomfish fishery has not and would not jeopardize the protection of the NWHI that President Bush is pursuing by designating the area a national monument. [26]

The National Marine Fisheries Service published reports attesting to the health of the NWHI bottomfish stocks. [27] [28] Commercial bottomfish and pelagic fishing as well as recreational catch-and-keep and catch-and-release fishing were also deemed by some to be compatible to the goals and objectives of the proposed NWHI National Marine Sanctuary. [29]

On February 27, 2007, President Bush amended Proclamation 8031, naming the monument "Papahānaumokuākea", [30] inspired by the names of the Hawaiian creator goddess Papahānaumoku and her husband Wākea. On March 1, first lady Laura Bush visited Midway Atoll, and on March 2, a renaming ceremony was held at Washington Place in Honolulu, Hawaii. [31] [32] At the ceremony, Laura Bush and Secretary of the Interior Dirk Kempthorne announced the name change and helped raise public awareness about the monument. [33] On May 15, 2007, President Bush announced his intention to submit the monument for Particularly Sensitive Sea Area (PSSA) status, which would "alert mariners to exercise caution in the ecologically important, sensitive, and hazardous area they are entering." [34] In October 2007, the Marine Environmental Protection Committee of the International Maritime Organization designated the monument as a PSSA. [35]

In August 2016, President Barack Obama expanded the area of the monument by roughly four times. The expanded monument was at that time the world's largest marine protected area. [36] [37]

On 21 October 2019, the Japanese aircraft carrier Akagi, which sunk during the Battle of Midway, was found here by the Research vessel RV Petrel.

On January 30, 2008, the U.S. Department of Interior added the monument to a tentative list of 14 proposed sites for consideration on the UNESCO World Heritage List. [38] The Federal Interagency Panel for World Heritage officially accepted the recommendation in November 2008. As a mixed site with natural and cultural resources, the International Union for the Conservation of Nature (IUCN) commented on the natural features of the monument, and the International Council on Monuments and Sites (ICOMOS) assessed its cultural aspects.

Federal researchers continue to study the monument's marine resources. A 2010 expedition reached the Kure atoll and its divers reached 250 feet (76 m) revealing new species of coral and other animals. Waikiki Aquarium is culturing the new corals. [41] [42]

On August 3, 2015, divers found the wreck of the USNS Mission San Miguel (T-AO-129) within the monument. She had sunk there on October 8, 1957 when she ran aground on Maro Reef while running at full speed and in ballast. Researchers will map and study the wreck in situ.[ citation needed]

A species of seaweed has been discovered that has been killing large patches of coral. [43]