The Hardangerfjord (English: Hardanger Fjord) [1] [2] [3] is the fourth longest fjord in the world, and the second longest fjord in Norway. It is located in Hordaland county in the Hardanger region. The fjord stretches 179 kilometres (111 mi) from the Atlantic Ocean into the mountainous interior of Norway along the Hardangervidda plateau. The innermost point of the fjord reaches the town of Odda. [4]

The Hardangerfjord starts at the Atlantic Ocean about 80 kilometres (50 mi) south of the city of Bergen. Here the fjord heads in a northeasterly direction between the island of Bømlo and the mainland. It passes by the larger islands of Stord, Tysnesøya, and Varaldsøy on the north/west side and the Folgefonna peninsula on the south/east side. Once it is surrounded by the mainland, it begins to branch off into smaller fjords that reach inwards towards the grand Hardangervidda mountain plateau. The longest branch of the Hardangerfjord is Sørfjorden which cuts south about 50 kilometres (31 mi) from the main fjord. Its maximum depth is more than 860 metres (2,820 ft) just outside the village of Norheimsund in the middle of the fjord. [5] [4]

Norway's third largest glacier is found on the Folgefonna peninsula, along of the Hardangerfjord. [4] With its three parts, the Folgefonna glacier covers an area of 220 km2 (85 sq mi), and in 2005 it became protected as Folgefonna National Park.

The area of the fjord is divided among 13 municipalities in Hordaland county: Bømlo, Eidfjord, Etne, Granvin, Jondal, Kvam, Kvinnherad, Odda, Stord, Sveio, Tysnes, Ullensvang, and Ulvik. The total number of inhabitants living in all these municipalities along the fjord is only a bit more than 70,000—on a total area of 8,471 square kilometres (3,271 sq mi).

About 8,000 BC, the Scandinavian land mass started to rise up as enormous glacial ice started to melt. The lower parts of the valleys became flooded, and so created what we today know as the Hardangerfjord. The valley was originally not only made through glacial erosion but by the high pressure melting water which pushed its way beneath the ice.

The history of the fjord goes far beyond its Viking history, back to the time of hunters on the surrounding mountains, and later on, farming along this fertile area which today is considered the "fruit orchard of Norway". [6] Later the fjord became the birthplace for a large tourism influx to Norway, and in 1875 Thomas Cook started weekly cruise departures from London to the Hardangerfjord, due to its spectacular nature, glaciers, and grand waterfalls. Soon after this many of the major waterfalls became the power source for large industries in fjord settlements such as the town of Odda. [7]

Today, the Hardangerfjord is witness to a renaissance in tourism and new infrastructure for travelers has once again become an industry for the local communities along the fjord.

The fjord has good conditions for fish farming. Fish farms yearly produce more than 40,000 tons of salmon and rainbow trout (2002) and makes the Hardangerfjord one of four major fish farming regions in the world. 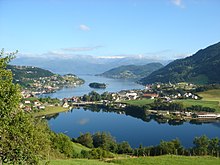 Bømlafjorden (west entrance to the fjord)

Kvinnheradsfjorden (around the Rosendal area)

Eid Fjord (around the Eidfjord area)